America’s boomers and undocumented immigrants need each other

The Obama administration has sought a stay from Judge Andrew Hanen while its lawyers appeal the decision. Last week, the Department of Justice issued an ultimatum to Hanen: rule on the stay motion by Monday night or else it’ll seek a stay from the 5th Circuit Court of Appeals to “protect their interests.” 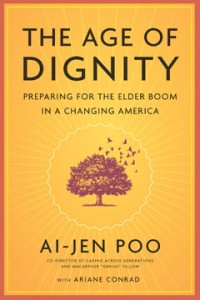 For some activists, it’s not just a humanitarian argument that compels their opposition to the Texas judge’s decision. There’s an economic, even a self-preservation, argument to be made for allowing Mr. Obama’s executive action to go forward, says Ai-jen Poo the co-director of Caring Across Generations, director of the National Domestic Workers Alliance and author of the new book, “The Age of Dignity: Preparing for the Elder Boom in a Changing America” (The New Press 2015).

Ai-jen Poo is thinking about the growing demand for long-term care as America’s boomer population ages. “Who will care for us?” she asks in the following op-ed, which, we should add, doesn’t necessarily reflect the views of Making Sen$e. Immigrants are often the workers helping American retirees live independently in their homes longer, and Poo’s worried that there won’t be enough caretakers to meet the current demand — let alone future demand — if immigrant workers aren’t allowed to stay in this country.

I’m one of those people, but probably not for the reasons you might think. It’s not only because helping millions of undocumented immigrants legalize their status and come out of the shadows will strengthen our communities and economy, and is the moral and right thing to do.

There’s a dimension of immigration policy that is rarely discussed, yet each one of us should bear in mind: every American who intends to grow old with dignity and independence should embrace this action — including Judge Hanen.

Judge Hanen, born in 1953, is one of the 4 million baby boomers reaching retirement age every year. This phenomenon, together with our longer lifespans, is creating an “Elder Boom.” Americans are living longer than ever before, and the longer we live, the more likely we are to need assistance to maintain our independence. A full 70 percent of people above the age of 65 will require some form of long-term care and support, according to the Department of Health and Human Services. Once we reach age 85, almost all of us will require care. By 2050, that number will reach 27 million.

Those of us who need assistance to live independently in our homes rely on a care workforce that is increasingly comprised of immigrants. Without their assistance, many Americans would simply not be able to live in their own homes, stay healthy, and age with dignity and freedom. People with disabilities of all ages would face more difficulties being active members of the community — going to school, working, volunteering, raising families of their own, and more.

“One-quarter of today’s home care workers were born outside the United States.”

A recent study by AARP demonstrated that 90 percent of us want to age in place, in our homes and communities. Yet the 3 million people currently in the direct care workforce cannot meet even the current need, let alone the demand for workers that will accompany the Elder Boom we’re experiencing. We will need at least 1.8 million additional home care professionals in the next decade. And increasingly, it is immigrant women and men who are doing the important work of providing assistance to seniors and people with disabilities. One-quarter of today’s home care workers were born outside the United States (see page 3 of the hyperlinked Institute for Women’s Policy Research report).

In 2014, we averaged nearly 900 deportations per day, (dividing the annual total by 365) not to mention the thousands of people being held in immigrant detention centers at any given moment. According to the Migration Policy Institute, we spend more money on immigration law enforcement than all other federal law enforcement programs combined. Those are precious resources that could be deployed toward training and preparing our future caregiving workforce to be a part of the solution to the changing needs of American families.

Granting people who have been living in our communities legal status also makes it possible for more people to work and pay taxes without fear. This will be crucial in preserving the social safety net that millions of seniors and people with disabilities depend upon. Meaningful change in immigration policy makes economic sense as well. In fact, the social safety net that our seniors depend upon requires it.

“The diverse and growing aging population and the growing immigrant population in this country need each other.”

In other words, immigration policy is inseparable from the issue of care and quality of life as we age. The diverse and growing aging population and the growing immigrant population in this country need each other. These women and men who do such important work supporting seniors and people with disabilities deserve not only the legal status offered by Mr. Obama’s executive action, but also a pathway to full citizenship that provides fair access to health care and long-term care should they need it. That is how we will secure our caregiving infrastructure for the future. It’s the right thing to do, not only for immigrants, but for our nation.

Left: Above, a home health aide massages the hand of one of her clients. Ai-Jen Poo, author of "The Age of Dignity: Preparing for the Elder Boom in a Changing America," argues that Mr. Obama's executive order on immigration is essential to sustaining the workforce needed to support aging boomers. Photo by Joe Raedle/Getty Images