America’s first big business? Not the railroads, but slavery

Editor’s Note: Sven Beckert is a professor of American history at Harvard University. His latest book, “Empire of Cotton: A Global History,” has just been published by Alfred A. Knopf. The New York Times calls it “deeply researched and eminently readable,” and compares his cotton and capitalism narrative to Thomas Piketty’s tome on wealth inequality, although the Times’ reviewer, Thomas Bender, stresses that Beckert is more readable.

In part one of this essay, a version of which first appeared in the Chronicle of Higher Education, Beckert shows just how integral slavery was to the development of American capitalism and reminds us that it was not just the South that made it so; the North was plenty involved. Read part two of Beckert’s take on slavery, about its place in the world, on Making Sen$e on Friday.

Few topics have animated today’s chattering classes more than capitalism. In the wake of the global economic crisis, the discussion has spanned political boundaries, with conservative newspapers in Britain and Germany running stories on the “future of capitalism” (as if that were in doubt) and Korean Marxists analyzing its allegedly self-destructive tendencies. Pope Francis has made capitalism a central theme of his papacy, while the French economist Thomas Piketty attained rock-star status with a 700-page book full of tables and statistics and the succinct but decisively unsexy title “Capital in the Twenty-First Century.” 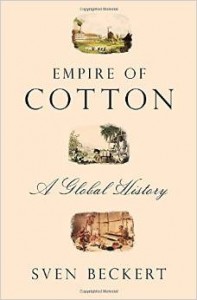 With such contemporary drama, historians have taken notice. They observe, quite rightly, that the world we live in cannot be understood without coming to terms with the long history of capitalism. Nowhere is this scholarly trend more visible than in the United States. And no issue currently attracts more attention than the relationship between capitalism and slavery.

If capitalism, as many believe, is about wage labor, markets, contracts, and the rule of law, and, most important, if it is based on the idea that markets naturally tend toward maximizing human freedom, then how do we understand slavery’s role within it? No other national story raises that question with quite the same urgency as the history of the United States: The quintessential capitalist society of our time, it also looks back on long complicity with slavery. But the topic goes well beyond one nation. The relationship of slavery and capitalism is, in fact, one of the keys to understanding the origins of the modern world.

For too long, many historians saw no problem in the opposition between capitalism and slavery. They depicted the history of American capitalism without slavery, and slavery as quintessentially noncapitalist.

For too long, many historians saw no problem in the opposition between capitalism and slavery. They depicted the history of American capitalism without slavery, and slavery as quintessentially noncapitalist. Instead of analyzing it as the modern institution that it was, they described it as premodern: cruel, but marginal to the larger history of capitalist modernity, an unproductive system that retarded economic growth, an artifact of an earlier world. Slavery was a Southern pathology, invested in mastery for mastery’s sake, supported by fanatics, and finally removed from the world stage by a costly and bloody war.

Some scholars have always disagreed with such accounts. In the 1930s and 1940s, C.L.R. James and Eric Williams argued for the centrality of slavery to capitalism, though their findings were largely ignored. Nearly half a century later, two American economists, Stanley L. Engerman and Robert William Fogel, observed in their controversial 1974 book “Time on the Cross,” the modernity and profitability of slavery in the United States.

Now a flurry of books and conferences are building on those often unacknowledged foundations. They emphasize the dynamic nature of New World slavery, its modernity, profitability, expansiveness, and centrality to capitalism in general and to the economic development of the United States in particular.

The historians Robin Blackburn in England, Rafael Marquese in Brazil, Dale Tomich in the United States, and Michael Zeuske in Germany led the study of slavery in the Atlantic world. They have now been joined by a group of mostly younger American historians, like Walter Johnson, Seth Rockman, Caitlin C. Rosenthal, and Edward E. Baptist looking at the United States.

While their works differ, often significantly, all insist that slavery was a key part of American capitalism—especially during the 19th century, the moment when the institution became inextricable from the expansion of modern industry—and to the development of the United States as a whole.

More than half of the nation’s exports in the first six decades of the 19th century consisted of raw cotton, almost all of it grown by slaves.

For the first half of the 19th century, slavery was central to the American economy. The South was an economically dynamic part of the nation (for its white citizens); its products not only established the United States’ position in the global economy but also created markets for agricultural and industrial goods grown and manufactured in New England and the mid-Atlantic states. More than half of the nation’s exports in the first six decades of the 19th century consisted of raw cotton, almost all of it grown by slaves. Though industry in the North expanded rapidly, especially after the 1830s, enslaved Americans continued to produce a significant share of the nation’s output. In an important book, “River of Dark Dreams: Slavery and Empire in the Cotton Kingdom,” Johnson observes that steam engines were more prevalent on the Mississippi River than in the New England countryside, a telling detail that testifies to the modernity of slavery. Johnson sees slavery not just as an integral part of American capitalism, but as its very essence. To slavery, a correspondent from Savannah noted in the publication Southern Cultivator, “does this country largely—very largely—owe its greatness in commerce, manufactures, and its general prosperity.”

Much of the recent work confirms that 1868 observation, taking us outside the major slaveholding areas themselves and insisting on the national importance of slavery, all the way up to its abolition in 1865. In these accounts, slavery was just as present in the counting houses of Lower Manhattan, the spinning mills of New England, and the workshops of budding manufacturers in the Blackstone Valley in Massachusetts and Rhode Island as on the plantations in the Yazoo-Mississippi Delta. The slave economy of the Southern states had ripple effects throughout the entire economy, not just shaping but dominating it.

Without access to the resources of New York and London, the expansion of slave agriculture in the American South would have been all but impossible.

Merchants in New York City, Boston, and elsewhere, like the Browns in cotton and the Taylors in sugar, organized the trade of slave-grown agricultural commodities, accumulating vast riches in the process. Sometimes the connections to slavery were indirect, but not always: By the 1840s, James Brown was sitting in his counting house in Lower Manhattan hiring overseers for the slave plantations that his defaulting creditors had left to him. Since planters needed ever more funds to invest in land and labor, they drew on global capital markets; without access to the resources of New York and London, the expansion of slave agriculture in the American South would have been all but impossible.

The profits accumulated through slave labor had a lasting impact. Both the Browns and the Taylors eventually moved out of the commodities trade and into banking. The Browns created an institution that partially survives to this day as Brown Brothers, Harriman & Co., while Moses Taylor took charge of the precursor of Citibank. Some of the 19th century’s most important financiers—including the Barings and Rothschilds—were deeply involved in the “Southern trade,” and the profits they accumulated were eventually reinvested in other sectors of the global economy.

As a group of freedmen in Virginia observed in 1867, “our wives, our children, our husbands, have been sold over and over again to purchase the lands we now locate upon. … And then didn’t we clear the land, and raise the crops of corn, of tobacco, of rice, of sugar, of every thing. And then didn’t the large cities in the North grow up on the cotton and the sugars and the rice that we made?” Slavery, they understood, was inscribed into the very fabric of the American economy.

Southern slavery was important to American capitalism in other ways as well. As management scholars and historians have discovered in recent years, innovations in tabulating the cost and productivity of labor derived from the world of plantations. They were unusual work sites in that owners enjoyed nearly complete control over their workers and were thus able to reinvent the labor process and the accounting for it—a power that no manufacturer enjoyed in the mid-19th century.

As management scholar Bill Cooke and historian Caitlin Rosenthal have shown, slave labor allowed the enslavers to experiment in novel ways with labor control. Edward E. Baptist, who has studied in great detail the work practices on plantations and emphasized their modernity in “The Half Has Never Been Told: Slavery and the Making of Modern Capitalism,” has gone so far as to argue that as new methods of labor management entered the repertoire of plantation owners, torture became widely accepted. Slave plantations, not railroads, were in fact America’s first “big business.”

Moreover, as Seth Rockman has shown, the slave-dominated economy of the South also constituted an important market for goods produced by a wide variety of Northern manufacturers and artisans. Supplying plantations clothing and brooms, plows and fine furniture, Northern businesses dominated the large market in the South, which itself did not see significant industrialization before the end of the 19th century.

Further, as all of us learned in school, industrialization in the United States focused at first largely on cotton manufacturing: the spinning of cotton thread with newfangled machines and eventually the weaving of that thread with looms powered at first by water and then by steam. The raw material that went into the factories was grown almost exclusively by slaves. Indeed, the large factories emerging along the rivers of New England, with their increasing number of wage workers, cannot be imagined without reliable, ever-increasing supplies of ever-cheaper raw cotton. The Cabots, Lowells, and Slaters—whatever their opinions on slavery—all profited greatly from the availability of cheap, slave-grown cotton.

As profits accumulated in the cotton trade, in cotton manufacturing, in cotton growing, and in supplying Southern markets, many cultural, social, and educational institutions benefited: congregations, hospitals, universities. Craig Steven Wilder has shown in “Ebony and Ivy: Race, Slavery, and the Troubled History of America’s Universities,” how Brown and Harvard Universities, among others, drew donations from merchants involved in the slave trade, had cotton manufacturers on their boards, trained generations of Southern elites who returned home to a life of violent mastery, and played central roles in creating the ideological underpinnings of slavery. Given that the United States in the first half of the 19th century was a society permeated by slavery and its earnings, it is hardly surprising that institutions that at first glance seem far removed from the violence of plantation life came to be implicated in slavery as well.

Left: The slave economy wasn't limited to the South, historian Sven Beckert shows in his new book, "Empire of Cotton." Above, "A Cotton Plantation on the Mississippi" lithograph published by Currier & Ives, 1884. Courtesy of the Library of Congress.