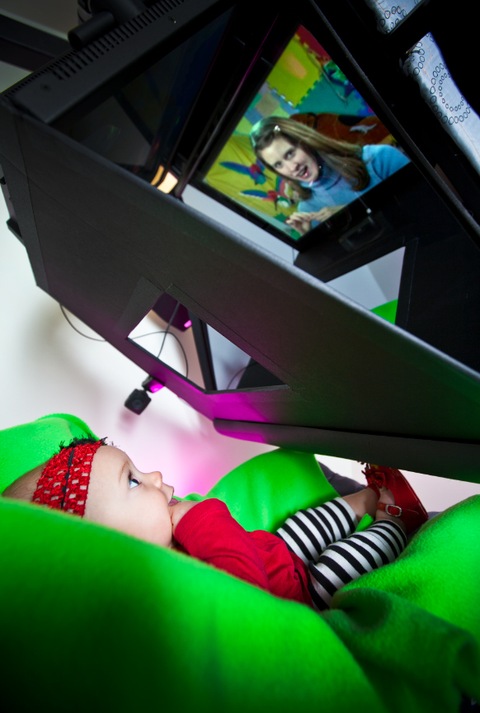 An infant watches a screen during an eye-tracking session. Photo by Kay Hinton/Emory University

An infant’s eye contact may be a clue into whether the child develops autism, a study published Wednesday in the journal Nature reveals. PBS NewsHour spoke to Warren Jones, a co-author of the study and Director of Research at the Marcus Autism Center, to ask about the implications of the findings.

NEWSHOUR: Can you explain briefly, the study you conducted and its significance?

WARREN JONES: This study is significant because it shows us for the first time that it’s possible to identify signs of autism within the first months of life. NEWSHOUR: How did you discover that?

WARREN JONES: We followed babies throughout the first three years of their lives and used eye-tracking technology to measure what babies look at when they are watching, videos of mom-like care givers interacting, such as playing peek-a-boo. We measure what babies see, and what they don’t see. From this, we learn how social development is unfolding. Infants later diagnosed with autism looked less and less at eyes over the first years of development, and their amount of eye looking was already declining within the first six months of life.

NEWSHOUR: How do these findings impact current thinking about autism?

WARREN JONES: First, these are the earliest signs of autism that we’ve ever observed. What this shows us is that although when you are just holding a baby, looking at a baby without this kind of technology, the signs may not be observable even though those changes are already actually in process. The unfolding of this is already happening within the first months of life.

Then there are two big implications. First, this study is a proof of concept that we can identify these signs very early. This means that in the future, after we see more kids and replicate the results, we hope to be able to use this technology to aid in early identification … We know that the earlier we diagnose children, the better their long term outcome will be … To think about the early months of life is a dramatic change to how we can alter the condition.

The other big implication relates to eye contact in autism. Deficits in eye looking have been a hallmark of autism from the time the condition was first described in 1943 … We knew about this in older children, but we didn’t know how these deficits started in early infancy. We expected that our technology would allow us to pick up on a difference very early in life and we would see less eye contact as soon as we started to collect data. Instead, we found in those first months of life, the levels of eye looking are actually present within the typical range, but month by month they are declining, whereas in typically developing infants they are actually increasing. At any one time point you wouldn’t really be able to notice any difference at all.

NEWSHOUR: This was a relatively small study, now what?

WARREN JONES: Our next step is already underway on another study, enrolling a much larger sample of children.

NEWSHOUR: Anything to add?

WARREN JONES: It is important to note for parents and professionals that the signs we observed are not things that could be seen with the naked eye. We don’t want to create extra anxiety for parents. If they do have concerns, the best thing to do is to talk with their pediatrician.

Responses have been edited for brevity.