An untold story of escape from the Pentagon on 9/11

Bobby Hogue woke up on his office floor covered in jet fuel. Thick black smoke consumed the room, dancing in a searing amber glow. Hogue’s head and ears pounded. His body throbbed with pain. As he pulled himself to his feet, the reality unfolding around him began to sink in. Through a crack in the floor, he could see a raging inferno on the deck below. He yelled out to his three office mates. All of them were injured, one so concussed he could barely move. Hogue stumbled to the only door in the office and pulled the handle with all of his strength. The explosion had wedged the door shut. They were trapped.

For five minutes, one of the trapped men, Cpl. Tim Garofola, strained to pry open the door, creating a crevice. As fire began to melt objects to the floor, the damaged structure of the Pentagon ached and moaned around them. After the group squeezed through the doorway, they stepped into another apocalyptic scene. They had two options: Escape through the south corridor, which had collapsed during the blast; or use the north corridor, engulfed in flames and billowing smoke.

As they contemplated which direction to run, they heard a voice from behind the black veil.

thewarhorsenews · Point of Impact: An Untold Story of Escape From the Pentagon on 9/11

Just as they looked down the hallway, the heat and structural damage caused several of the office doors to explode, driving wooden shards deep into the walls. They had no time to think about options. As Hogue helped his injured coworker to safety through the smoke toward the voice down the hallway, Garofola searched nearby rooms for survivors, saving at least two people. “Fire wasn’t the scariest part,” Hogue told The War Horse during months of interviews. “It was the threat of collapse.”

The group rushed down the halls and stairways as a growing trail of people followed. All searched for a path to safety. The security at the Pentagon, meant to keep enemies from breaching its perimeter, had trapped them within the fortified walls.

The security at the Pentagon, meant to keep enemies from breaching its perimeter, had trapped them within the fortified walls.

They pushed past security guards, who tried to keep them inside as if it were a normal day. They made it to a restricted subway entrance and exited the Pentagon into a parking lot. Hogue dug into his pants pocket, relieved to find his car keys. As the group rushed to his sedan, a major he escaped with pulled out a cell phone. Lines were jammed and the major was unable to reach his family, so Hogue tried to call his wife. When she answered, he could barely hear her, his ears still ringing from the blast. The major spoke for Hogue and then relayed phone numbers from nearby strangers in the crowd, who begged Hogue’s wife to tell their families they were alive.

As Hogue looked around, he began to “succumb to the concussion,” the fear, and “the weight of responsibility,” he said. Helping the mass of people in distress felt insurmountable. Hogue urged his group to cram into his car so they could drive to the nearby home of his office mate Peter Murphy, the senior counsel to the commandant, who had been injured during the blast. As Hogue looked back in his rearview mirror, he saw smoke fill the air and emergency lights flash in the distance.

After the group pulled into Murphy’s driveway, they rushed inside, where Hogue explained to Murphy’s wife what had happened. They watched on television as the north tower of the World Trade Center collapsed. It was 10:28 a.m.

While the dust in lower Manhattan began to settle, Hogue got back in his car and drove to his Springfield, Virginia home with Maj. Joe Baker, whose cell phone he had borrowed earlier. When he swung open his front door and walked into the foyer, his wife and daughter hugged him, both in tears. As he looked over his wife’s shoulder and peered down the hallway, Hogue saw his then-12-year-old son standing motionless with a blank look in his eyes. It was almost as if he was unable to process seeing his father caked in a toxic coating of ash, Hogue said.

“That’s when reality sank in.”

Leading up to the attack on the Pentagon, Hogue never imagined he would spend his entire professional career as a civil servant in the defense department. He had worked on top-secret weapons programs; litigated military civil rights cases; and seen American conflicts during Desert Storm, Grenada, and Panama, but he never envisioned he would be hand-selected to serve alongside six Marine commandants, the most senior officers in the Corps. As he stood in the shower of his home that afternoon 20 years ago, Hogue reflected on the significance of the attack and how the day also marked the one-year anniversary of him becoming a Senior Executive Service employee, a coveted career achievement among civil servants, as well as his first official day as the deputy counsel to the commandant. 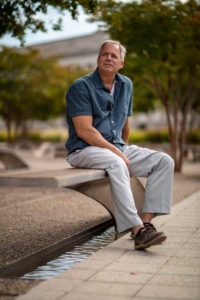 Robert Hogue reflects on the 20th anniversary of the attack while seated at the Pentagon 9/11 Memorial. Photo by Eliot Dudik, for The War Horse.

Two decades ago, Hogue couldn’t know how his career choice would affect his life, that even as volunteers pulled bodies—and an important flag—from the wreckage, he would help plan the longest war in U.S. history; that he would guide the Corps through its most radical changes since its founding; and that he would learn the ethos of the Marine Corps. But that day, for the first time, he questioned whether he still wanted the job.

“I never expected the battle to come home,” he said.

As the water ran over his head, and the remnants of his office swirled down the drain, his choice was clear: Semper Fidelis. When Hogue went to bed, he restlessly played the day over and over in his head. He begged his mind to let him fall asleep, but the vertigo and nausea were too strong. Just before midnight, roughly 15 hours after a 757 jumbo jet exploded beneath his office, Hogue’s telephone rang again, and his wife relayed a message.

“The commandant wants to see you first thing in the morning,” she yelled, her hands cupped around her mouth to amplify her voice as his ears were still ringing. “Gunny says, ‘Welcome to the Marine Corps.’”

Read the full story at The War Horse.

This story was published in partnership with The War Horse, The War Horse, an award-winning nonprofit newsroom that publishes bulletproof reporting on the human impact of military service. Subscribe to their newsletter or learn more about their impact.

Above: A military helicopter flies in front of the Pentagon September 14, 2001 in Arlington, Virginia at the impact site where a hijacked airliner crashed into the building. Photo by Stephen J. Boitano/Getty Images