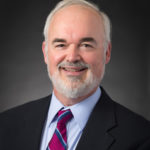 Many of the recent stories about sexual abuse claims against disgraced Hollywood mogul Harvey Weinstein, former Fox News host Bill O’Reilly and other powerful actors, journalists and executives mention settlements either they or their employers made to silence women who accused them of misconduct.

American taxpayers are helping foot the bill for keeping despicable behavior in the shadows.

These settlements often require alleged victims to sign a nondisclosure agreement – essentially a pledge of secrecy – in exchange for a cash payment. They are designed to keep the reputations of allegedly abusive high-flyers intact, an arrangement that can allow repeated wrongdoing.

As a law professor who focuses on white-collar crime, what I find striking about these contracts is how they can be treated as tax-deductible business expenses. That means American taxpayers are helping foot the bill for keeping despicable behavior in the shadows.

I don’t believe that secret payments to settle sexual abuse claims should be tax-deductible. Here’s why.

Sexual harassment becomes a crime only when there is a nonconsensual touching or sexual contact that can be prosecuted.

Victims of sexual harassment in the workplace usually can pursue personal injury claims by seeking damages from the executive or colleague responsible for it – or their employer – to compensate for emotional distress and any physical injury the abuse caused. These cases are mostly litigated at the state level, if they ever reach a courtroom.

The broader cost of these confidential agreements to society is that they leave perpetrators free to prey on new victims who are unaware that they may be walking into a trap when they meet privately with a powerful executive or someone who simply has greater seniority and influence.

Some states have tried to stop or at least curb this practice.

For example, Florida’s Sunshine in Litigation Act prohibits courts from entering an order that conceals information related to a public hazard, which is defined as something or someone “that has caused and is likely to cause injury.”

That kind of solution, however, only goes a short way toward protecting the public because it is limited to cases that go to court. For example, a former Weinstein Company employee withdrew her complaint to management without ever resorting to a legal filing by accepting a settlement in 2015. A total of eight women have collected between roughly US$80,000 and $150,000 each due to secret agreements not to disclose Weinstein’s alleged misconduct, The New York Times reported in October.

When settlements stave off the filing of a sexual harassment complaint in court, the agreements aren’t subject to mandates like Florida’s Sunshine in Litigation Act.

California State Sen. Connie Leyva plans to introduce a bill that would go even further. Her legislation would ban all secret nondisclosure agreements in financial settlements that arise from sexual harassment, assault and discrimination cases. 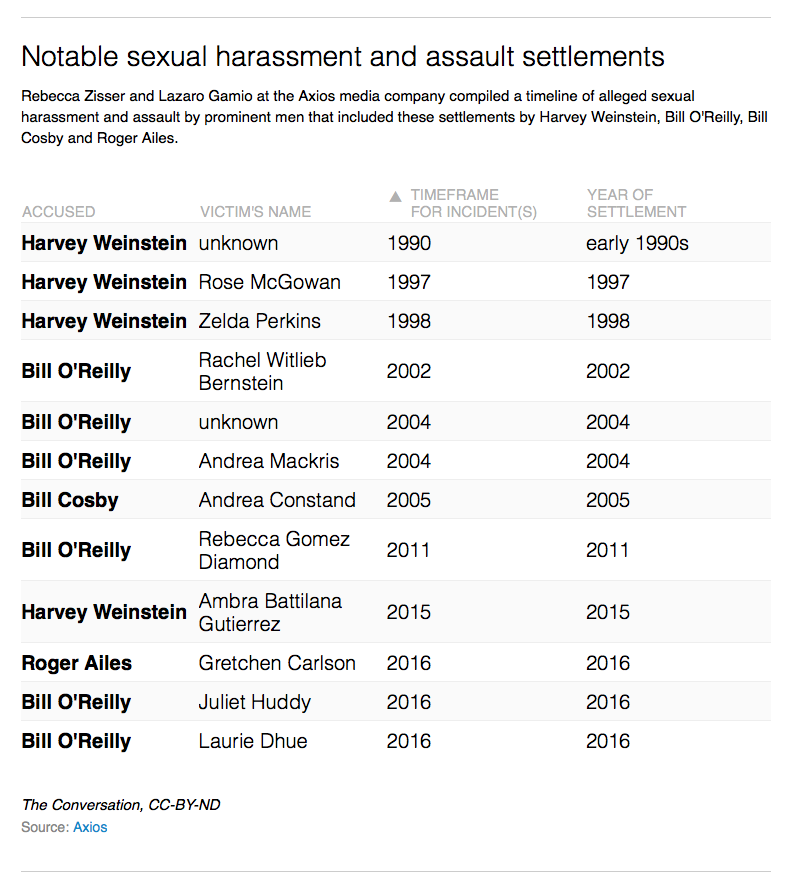 The payments associated with these settlements can be treated as a business expense. That means they are tax-deductible, as long as they are related to the conduct of the company’s ordinary operations.

Although it might seem odd to say that sexual harassment is within the realm of a company’s business, the many accusations against Weinstein involved encounters that were at least purportedly related to future movie productions.

Either an employer or the person accused of harassment can pay the money required by these settlements. In O’Reilly’s case, Fox has said it knew that he had reached a new settlement with an accuser before it renegotiated his contract earlier this year. Fox’s insistence that the company was unaware of the size of the settlement – $32 million – makes it clear that O’Reilly wrote the check.

Even the attorney’s fees for negotiating the settlement are deductible as another ordinary business expense.

Even the attorney’s fees for negotiating the settlement are deductible as another ordinary business expense.

Until about 50 years ago, payments related to violations of what the courts deemed violations of “public policy” were not tax-deductible. Congress changed that in 1969. Section 162 of the U.S. tax code now only explicitly prohibits the deduction of bribe payments, health care kickbacks, lobbying expenditures and any fines or penalties paid to the government for violating the law.

Just about everything else is deductible. But most victims of sexual harassment and abuse do not get a break. That’s because the law exempts payments only for physical injuries, not for payments related to emotional distress.

Who else gets to deduct their settlement payments for misconduct?

One good example is BP. The oil giant got to write off over $15 billion of its $20.8 billion settlement with the federal government over its massive Gulf Coast oil spill, allowing it to potentially shelter years of income from federal taxes.

One way to discourage corporate misconduct is to raise the cost of engaging in it.

Congress is now weighing whether to close many loopholes as part of a broad tax package. In my opinion, that makes this the ideal time to stop allowing deductions for secret settlements of sexual abuse claims from corporate or personal income taxes.

Ending this tax break would make this kind of confidentiality agreement more costly for perpetrators and the companies that let them off the hook. That would give corporate accountants and human resources departments a powerful incentive to root out the problem.

There are no surefire ways to end sexual harassment and assault in the workplace. But making it cost more to hide this misconduct might help make it less commonplace.

I am a Professor of Law at Wayne State University in Detroit, where I teach courses in criminal law, criminal procedure, white collar crime, professional responsibility, and corporate/securities law. Before entering law teaching in 1994, I was an attorney at the Securities & Exchange Commission in the Enforcement Division, and at the U.S. Department of Justice, in the Fraud Section of the Criminal Division. I have published books on white collar crime and public corruption, and I am a co-author of treatises on federal criminal practice and securities crimes. I write a regular column on the New York Times DealBook called "White Collar Watch."