WASHINGTON — The U.S. and British governments, citing unspecified threats, are barring passengers on some international flights from mostly Middle Eastern and North African countries from bringing laptops, tablets, electronic games and other devices on board in carry-on bags.

Passengers flying to the United States from 10 airports in eight countries will be allowed only cellphones and smartphones in the passenger cabins, senior Trump administration officials said. Larger electronic items must be checked.

The British security rules will affect flights from six countries and will bar passengers from taking “any phones, laptops or tablets larger than a normal sized mobile or smartphone,” into the cabin.

The U.S. rules took effect Tuesday, and airlines will have until 3 a.m. EDT Saturday to implement them or face being barred from flying to the United States, the officials said.

They said the decision was prompted by “evaluated intelligence” about potential threats to airplanes bound for the United States. The officials would not discuss the timing of the intelligence or if any particular terror group is thought to be planning an attack.

Trump administration officials briefed reporters on condition they not be identified publicly. That was despite President Donald Trump’s repeated insistence that anonymous sources should not be trusted.

The electronics ban affects flights from international airports to the U.S. from in Amman, Jordan; Kuwait City, Kuwait; Cairo; Istanbul; Jeddah and Riyadh, Saudi Arabia; Casablanca, Morocco; Doha, Qatar; and Dubai and Abu Dhabi in the United Arab Emirates. About 50 flights a day, all on foreign carriers, will be affected. The officials said no U.S.-based airlines have nonstop flights from those cities to the United States. 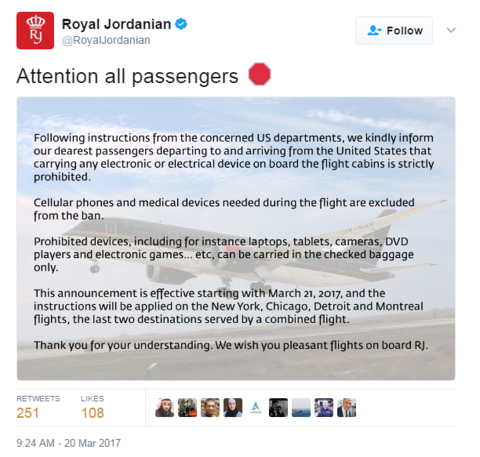 A tweet from Royal Jordanian airline on Monday morning suggested the U.S. government would ban certain electronics on flights, starting Mar. 21. The tweet has since been deleted.

With the order affecting flights from predominantly Muslim nations, the ban may invite comparisons to Trump’s orders barring travel from several Muslim-majority-nations, which have been blocked by courts. Early in his candidacy, Trump had called on barring Muslims from entering the United States.

But the comparison has its limits. The travel ban was more severe, separating families and barring students from studying in the U.S. The laptop ban is more of an inconvenience and its stated reason is to protect the very travelers who are affected by it. Still, it’s bound to annoy powerful business people and diplomats, and could affect the travel plans of wealthy tourists sought after by the U.S. travel industry.

Details of the electronics ban were first disclosed by Royal Jordanian and the official news agency of Saudi Arabia.

In its statement, Royal Jordanian said the electronics ban would affect its flights to New York, Chicago, Detroit and Montreal.

A spokesman for Royal Jordanian says the airliner has not yet started to enforce the new U.S. regulation. Basel Kilani has told The Associated Press that the airline was still awaiting formal instructions from the relevant U.S. departments, which could possibly come later on Tuesday.

However, the Mideast’s biggest airline is confirming that U.S.-bound passengers will be prevented from carrying electronic gadgets aboard aircraft.

Dubai-based Emirates said Tuesday the ban takes effect on Saturday. That guidance differs from the information provided by senior Trump administration officials, who have said the ban is in place from Tuesday

Homeland Security Secretary John Kelly phoned lawmakers over the weekend to brief them on aviation security issues that have prompted the impending electronics ban, according a congressional aide briefed on the discussion. The aide was not authorized to speak publicly about the issue and spoke on the condition of anonymity.

The administration officials who briefed reporters about the ban said foreign officials were told about the impending order starting Sunday.

A U.S. government official said such a ban has been considered for several weeks. The official spoke on the condition of anonymity to disclose the internal security discussions by the federal government.

The ban would begin just before Wednesday’s meeting of the U.S.-led coalition against the Islamic State group in Washington. A number of top Arab officials were expected to attend the State Department gathering. It was unclear whether their travel plans were related to any increased worry about security threats.

Most major airports in the United States have a computer tomography or CT scanner for checked baggage, which creates a detailed picture of a bag’s contents. The equipment can warn an operator of potentially dangerous material, and may provide better security than the X-ray machines used to screen passengers and their carry-on bags. All checked baggage must be screened for explosives.

Left: A passenger on an aircraft using a digital tablet. The U.S. government is barring passengers on Royal Jordanian Airlines flights from bringing laptops, iPads, cameras and other electronics in carry-on luggage on certain U.S.-bound flights starting Tuesday, the airline said in a tweet Monday. Photo by Getty.