Martinez’s muse was the thumping beat from a satellite set-up pumping a techno tune into the chilly desert night Thursday.

“Here’s a big open space for people to be,” he said. “One person starts something and it infects everybody with positivity. Anything can happen if you give people a place to be.” 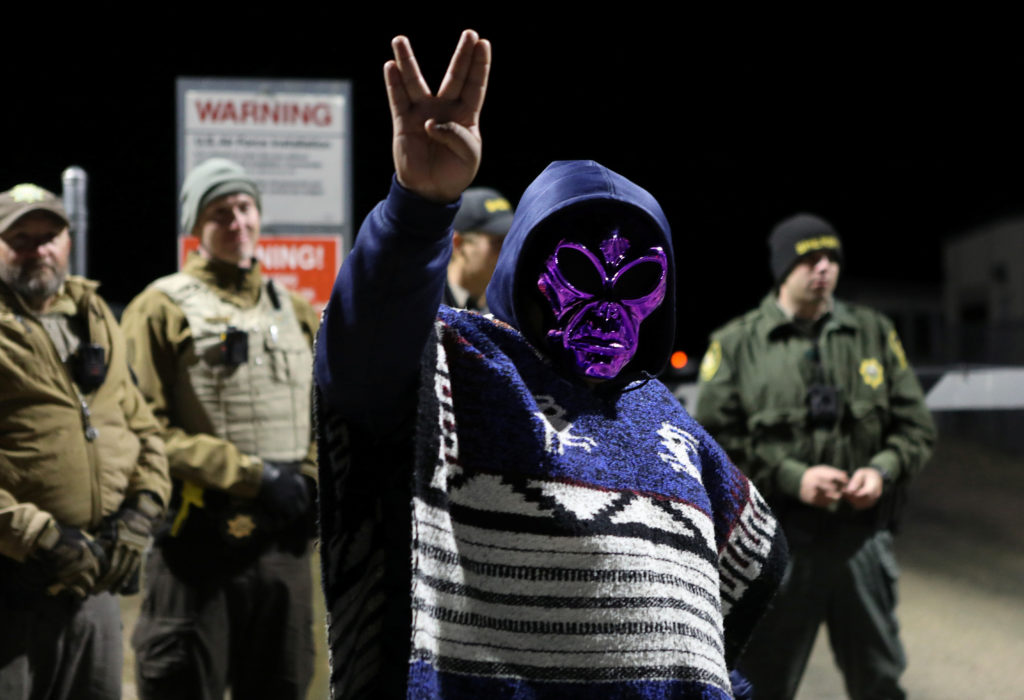 An attendee wears an alien mask at the gate of Area 51 as an influx of tourists responding to a call to ‘storm’ Area 51, a secretive U.S. military base believed by UFO enthusiasts to hold government secrets about extra-terrestrials, is expected in Rachel, Nevada, U.S. September 20, 2019. Photo by Jim Urquhart/Reuters

Lee said late Thursday that more than 150 people also made the rugged trip on washboard dirt roads to get within selfie distance of two gates to the Area 51 U.S. Air Force installation that has long fueled speculation about government studies of space aliens and UFOs.

The Air Force has issued stern warnings for people not to try to enter the Nevada Test and Training Range, where Area 51 is located.

Lee said no arrests were made.

“It’s public land,” the sheriff said. “They’re allowed to go to the gate, as long as they don’t cross the boundary.” 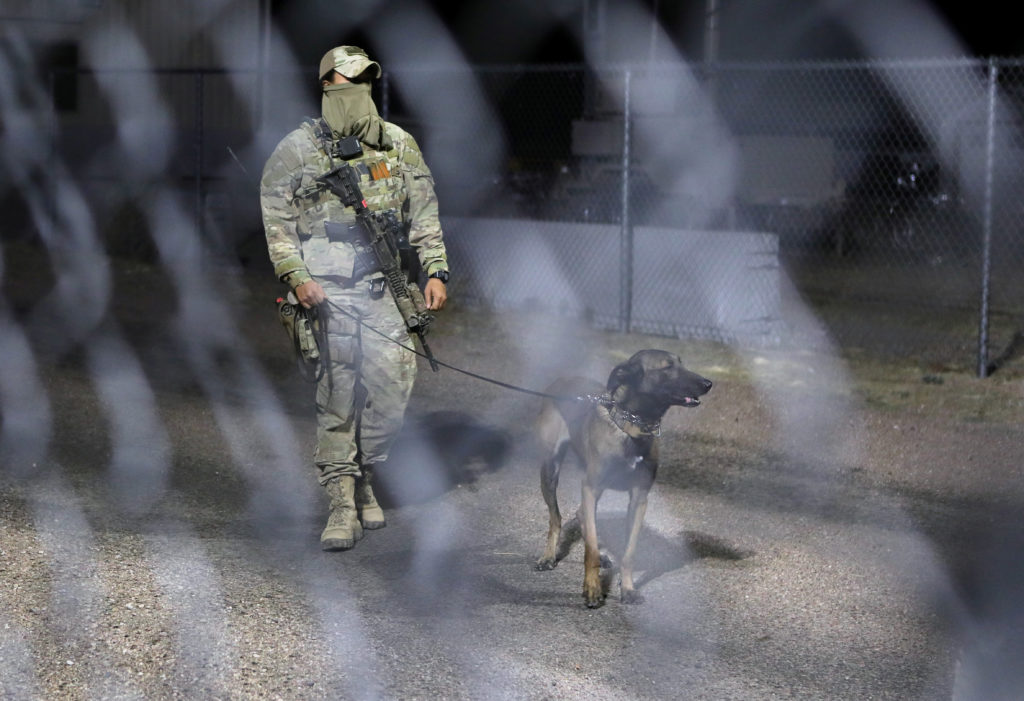 A military personnel member patrols with a dog within the gates to Area 51 as an influx of tourists responding to a call to ‘storm’ Area 51, a secretive U.S. military base believed by UFO enthusiasts to hold government secrets about extra-terrestrials, is expected in Rachel, Nevada, U.S. September 20, 2019. Photo by Jim Urquhart/Reuters

Authorities reported no serious incidents related to festivals scheduled until Sunday in Rachel and Hiko, the two towns closest to Area 51. They’re about a 45-minute drive apart on a state road dubbed the Extraterrestrial Highway, and a two-hour drive from Las Vegas.

Earlier, as Wily Savage band members helped erect the wooden frame for a stage shade in Rachel, guitarist Alon Burton said he saw a chance to perform for people who, like Martinez, were looking for a scene in which to be seen.

“It started as a joke, but it’s not a joke for us,” he said. “We know people will come out. We just don’t know how many.”

Michael Ian Borer, a University of Nevada, Las Vegas, sociologist who researches pop culture and paranormal activity, called the festivities sparked by the internet joke “a perfect blend of interest in aliens and the supernatural, government conspiracies, and the desire to know what we don’t know.”

The result, Borer said, was “hope and fear” for events that include the “Area 51 Basecamp” featuring music, speakers and movies in Hiko, and festivals in Rachel and Las Vegas competing for the name “Alienstock.”

“People desire to be part of something, to be ahead of the curve,” Borer said. “Area 51 is a place where normal, ordinary citizens can’t go. When you tell people they can’t do something, they just want to do it more.”

Still, neighbors braced for trouble after millions of people responded to the “Storm Area 51” Facebook post weeks ago.

“Those that know what to expect camping in the desert are going to have a good time,” said Joerg Arnu, a Rachel resident who can see the festival grounds from his home.

Those who show up in shorts and flip-flops will find no protection against “critters, snakes and scorpions.”

“It will get cold at night. They’re not going to find what they’re looking for, and they are going to get angry,” Arnu said.

Some cellphones didn’t work Thursday in Rachel, and officials expect what service there was to eventually be overwhelmed.

The Federal Aviation Administration closed nearby airspace, although Air Force jets could be heard in the sun-drenched skies, along with an occasional sonic boom.

The event also promises food trucks and vendors, trash and electric service, and a robust security and medical staff. 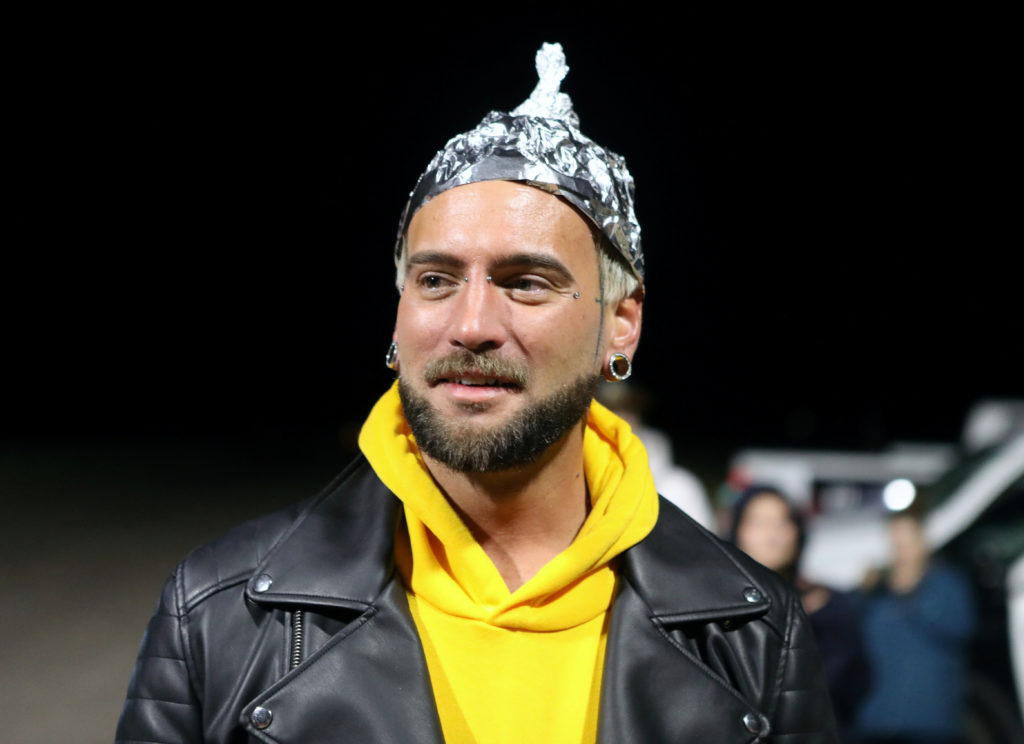 An attendee wears a tinfoil hat at the gates of Area 51 as an influx of tourists responding to a call to ‘storm’ Area 51, a secretive U.S. military base believed by UFO enthusiasts to hold government secrets about extra-terrestrials, is expected in Rachel, Nevada, U.S. September 20, 2019. Photo by Jim Urquhart/Reuters

Harris said he was prepared for as many as 15,000 people and expected they would appreciate taking selfies with a replica of the Area 51 back gate without having to travel several miles to the real thing.

She reported no arrests or incidents Thursday.

Her deputies last week arrested two Dutch tourists attracted by “Storm Area 51.” The men pleaded guilty to trespassing at a secure U.S. site nowhere near Area 51 and were sentenced to three days in jail after promising to pay nearly $2,300 each in fines.

Left: A woman carries a sign outside a gate to Area 51 as an influx of tourists responding to a call to 'storm' Area 51, a secretive U.S. military base believed by UFO enthusiasts to hold government secrets about extra-terrestrials, is expected in Rachel, Nevada, U.S. September 20, 2019. Photo by Jim Urquhart/Reuters

Why the cost of holding prisoners at Guantanamo Bay keeps rising