A group of armed activists and militiamen stormed the empty headquarters of a remote wildlife refuge in Oregon late Saturday to protest the impending imprisonment of two ranchers convicted of arson on federal land.

About 150 supporters converged on the premises of Malheur National Wildlife Refuge, roughly 30 miles south of Burns, Oregon, where they had protested earlier, the Oregonian reported. Police said no employees were inside at the time of the occupation.

Two area ranchers, Dwight L. Hammond, 73, and his son Steven Hammond, 46, were convicted in 2012 of arson for setting fire to federal land in an area they had been leasing from the government to graze their livestock.

Prosecutors said the Hammonds ignited a series of fires between 2001 and 2006 that burned nearly 140 acres on lands overseen by the U.S. Bureau of Land Management. The ranchers argued they had started the fires to protect their own nearby property from wildfires and invasive species.

Dwight Hammond was sentenced to three months in prison and Steven Hammond to one year for starting the fires.

But after the duo had served their terms, a federal appeals court ruled in February 2014 that the father and son should have spent at least five years in prison, based on a 1996 law that effectively categorized their actions as terrorism, the Oregonian reported.

A federal court ruled in October the Hammonds were released prematurely from prison and ordered them to a lengthier sentence set to begin on Monday.

The Oregonian reported that the militiamen hailed from several states and demanded the federal land be returned to local residents and that the Hammonds be spared additional prison time. 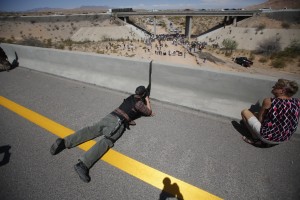 A militiamen aims his weapon in 2014 in support of Nevada rancher Cliven Bundy who had been letting his animals graze illegally on federal land for over 20 years. Photo By Jim Urquhart/Reuters

Among the occupiers were Ammon and Ryan Bundy, whose father, Cliven Bundy, made headlines in 2014 for his contention over the use of federal land near his Nevada ranch that involved a standoff with federal agents, an issue that also attracted anti-government activists.

“The facility has been the tool to do all the tyranny that has been placed upon the Hammonds,” said Ammon Bundy, to the Oregonian, in a telephone interview. “We’re planning on staying here for years.”

Law enforcement officials have so far been quiet about their plan to address the militiamen, though a statement released Sunday afternoon by Harney County Sheriff David M. Ward indicated the effort would include members of “several organizations,” who would push to end the standoff “as quickly and peaceful as possible.”

The Oregonian reported the Oregon State police and the U.S. Federal Bureau of Investigations are involved.

“These men came to Harney County claiming to be a part of militia groups supporting local ranchers when in reality these men had alternative motives to attempt to overthrow the county and federal government in hopes to spark a movement across the United States,” Ward, the sheriff, said. “We ask that people stay away from the refuge for their safety.”

Amelia Templeton, a reporter with Oregon Public Broadcasting, said Sunday in an interview with the PBS NewsHour, that she met briefly with militia members outside of the federal building, where they were gathered at a bonfire with no sign of police at the remote site surrounded by fields.

“Generally they said that they are showing support for a pair of ranchers here,” she said in a telephone interview. “They’ve also said that they essentially want to take back federal land and that that land should belong to the people. That it’s been taken from ranchers and loggers and they want to see it returned.”

Watch the full interview below.