Protesters against the North Dakota Access oil pipeline said Saturday they will not move from the site of a months-long encampment, even after the U.S. Army Corps of Engineers issued a letter announcing its plan to close the land.

The protesters, or “water protectors,” were notified that land north of the Cannonball River will be closed on Dec. 5, according to Dave Archambault II, chairman of the Standing Rock Sioux Tribe.

The Oceti Sakowin camp, which rests on the banks of the river, contains a loose collective of tribal nations and out-of-state supporters opposing the 1,172-mile pipeline. The camp is about 45 minutes south of Bismarck, the state capital.

Archambault said he was “deeply disappointed” by the Army Corps’ decision, “but our resolve to protect our water is stronger than ever.”

“It is both unfortunate and disrespectful that this announcement comes the day after this country celebrates Thanksgiving — a historic exchange of goodwill between Native Americans and the first immigrants from Europe,” Archambault wrote. “Although the news is saddening, it is not at all surprising given the last 500 years of the mistreatment of our people.”

The Army Corps did not immediately respond to requests for comment.

The Standing Rock Sioux Tribe and its supporters have said the $3.7-billion pipeline threatens the reservation’s main water supply and cultural artifacts, all claims the company behind the project, Energy Transfer Partners, has denied. 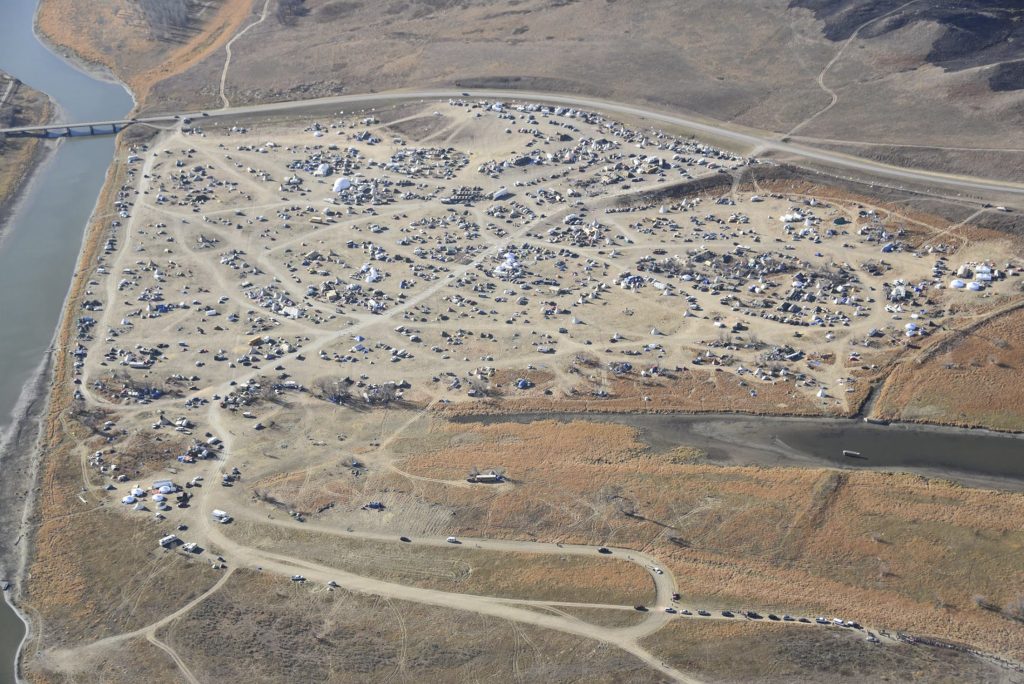 Dakota Access Pipeline protesters are seen at the Oceti Sakowin campground near the town of Cannon Ball, North Dakota in an aerial photo provided by the Morton County Sheriff’s Department. Photo handout via Reuters.

Archambault said the Army Corps closed public access to the land over “safety concerns,” adding that the agency plans to allow a “free-speech zone” south of the Cannonball River.

Dallas Goldtooth, an organizer with the Indigenous Environmental Network, posted what appeared to be the Army Corps’ statement on Facebook.

The American Civil Liberties Union criticized the Morton County Sheriff’s Department and other law enforcement’s response in the encounter, saying it was a “catastrophe with serious human rights implications.”

The sheriff’s department defended the decision to douse protesters in freezing temperatures, saying that protesters were “very aggressive.” An initial statement from the department said it was an “ongoing riot.”

Energy Transfer CEO Kelcy Warren told the NewsHour that the pipeline was built “to have minimal impact to all people concerned,” adding that “we’re building the pipeline.”

New Jersey Sen. Cory Booker on Friday called on Attorney General Loretta Lynch and the Department of Justice to investigate tactics that police are using against protesters at Standing Rock.

“I call on the United States Department of Justice (DOJ) to promptly and thoroughly investigate all credible reports of inappropriate police tactics and, if DOJ has not already done so, to send federal monitors to Standing Rock to ensure that protesters can peacefully assemble and exercise their First Amendment rights,” he wrote.

Left: The Oceti Sakowin camp is seen in the morning shrouded in mist during a protest against the Dakota Access pipeline near the Standing Rock Indian Reservation near Cannon Ball, North Dakota. Photo by Stephanie Keith/Reuters