WARNING: This video is very graphic. It shows the fatal shooting of Oregon occupier LaVoy Finicum. Video by FBI

“The negotiators continue to work around the clock to talk to those four people in an effort to get them to come out peacefully,” said FBI Special Agent in Charge Greg Bretzing.

During the press conference, officials also provided new details about the death of LaVoy Finicum, one of the armed occupiers who was shot by police Tuesday afternoon.

In an aerial video taken from a law enforcement airplane overhead, viewers see a white pickup truck driven by Finicum stopped for about four minutes.

Bretzing said FBI agents and Oregon State Troopers are giving verbal commands to the occupants to surrender. He wouldn’t comment about what was being said, but added the details may come out later.

Then the truck takes off, moving fast. And police pursue.

As the pickup approaches a police roadblock, Finicum veers his truck to the left, off the road and into the snow. He nearly hit an FBI agent in the process, Bretzing said.

There has been an ongoing, fierce debate about the circumstances surrounding his death.

The video shows Finicum getting out of the pickup with his hands in the air. He shuts the truck door before walking through the snow moving toward an officer.

Bretzing said at least twice that Finicum reached “his right hand toward a pocket on the left inside portion of his jacket.”

At that point, the video shows an Oregon State Police trooper emerge from the treeline, walk towards Finicum, and at that point officers shoot him. The Arizona rancher immediately falls to the ground, but the video also shows him still moving, waving his arm. 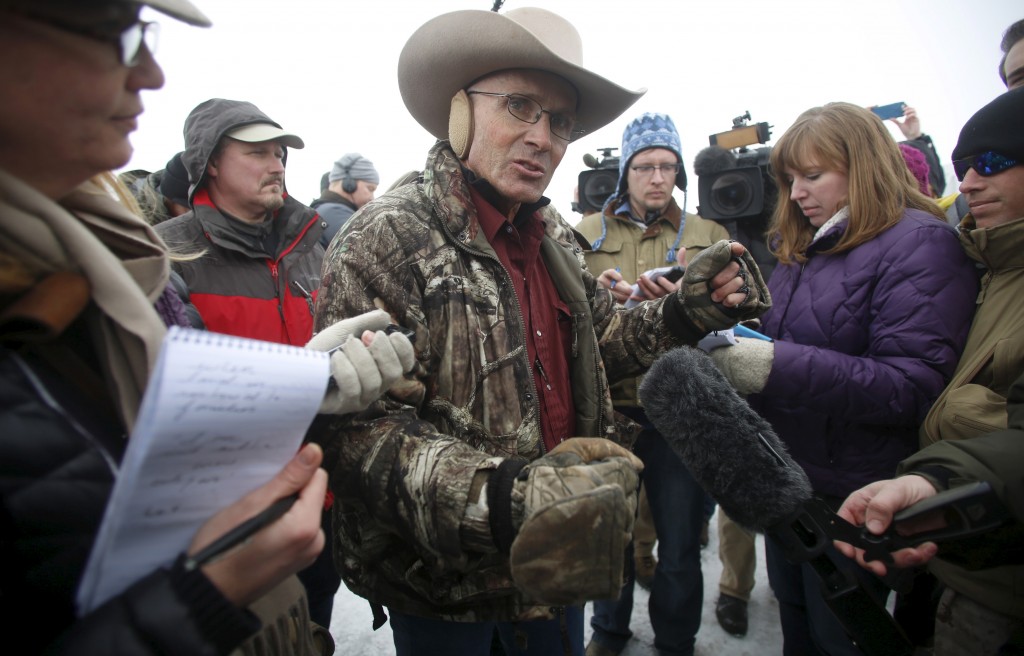 Arizona cattle rancher LaVoy Finicum talks to the media at the Malheur National Wildlife Refuge near Burns, Oregon, on Jan. 5. Finicum, who often served as a spokesman for the armed occupiers, was killed Tuesday in an altercation with federal authorities. Photo by Jim Urquhart/Reuters

Bretzing said Finicum had a loaded 9 mm semi-automatic handgun in the pocket.

About 30 seconds after the shooting, the video shows police deploying flash bangs and later, OC capsules, which Bretzing described as something similar to pepper spray.

“As soon as the agents and troopers were confident that they had addressed any further threats, they provided medical assistance to Finicum,” Bretzing said. It happened about 10 minutes after the shooting, he said.

In a statement read by his lawyers Thursday in Portland, Ammon Bundy said he was “anxiously” waiting to review the video.

“We never wanted bloodshed,” Bundy said through his lawyers. “I mourn LaVoy’s death.”

Bretzing said he knew the incident and ongoing occupation at the refuge was hard on the community.

“I want to acknowledge the stress and disruption that the occupation of the refuge has caused to the people of Harney County,” he said. “We are doing everything we can to bring this to a resolution safely and quickly.”

READ MORE: What do the presidential candidates think about the militia takeover in Oregon?