At least 24 people have been killed in flooding and storms across the South and Midwest over the last week, as swelling rivers continue to threaten parts of several states.

Rescuers were still searching for four people missing in Missouri and Illinois and one man in Oklahoma on Saturday, even as waters begin to recede in St. Louis, where some of the worst flooding took place after more than 10 inches of rain fell over a three-day period along the Mississippi River.

While a state of emergency was lifted from the region on Saturday, residents and emergency crews are hunkering down against a potential deluge in southern Illinois and Missouri. Officials are also continuing to monitor levees in Louisiana and crews are stacking sandbags in Tennessee against the possibility of new rounds of flooding.

“All that water’s coming south and we have to be ready for it,” Louisiana Lieutenant Governor-Elect Billy Nungesser told reporters. “It’s a serious concern. It’s early in the season. We usually don’t see this until much later.”

Several states between Ohio River and eastern Oklahoma have been contending with torrents of water that are unusual during the winter season, the National Weather Service said.

The spate of rain is also causing the Mississippi River to hit levels not seen for more than two decades, when the Great Flood of 1993 caused widespread devastation. 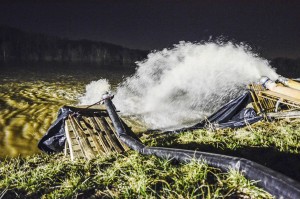 Water is pumped over the Valley Park levee on the Meramec River in Valley Park, Missouri, in this National Guard picture taken Dec. 31, 2015. Photo By Patrick P. Evenson Via Reuters

Winter floods have decimated communities along the Mississippi River over the last several weeks as the waterways breached their banks causing at least 11 levees to fail. Many of the deaths in Illinois, Missouri, Oklahoma and Arkansas, were due to people driving into flooded areas during heavy rains, according to Reuters.

Major flooding is expected to continue along the Mississippi, Arkansas and Ohio rivers in Missouri, Illinois and Kentucky, according to the National Weather Service. Flood warnings were also in effect on Friday for parts of Texas, Oklahoma, the Carolinas, Alabama and Kentucky.

Illinois Gov. Bruce Rauner on Friday declared 12 counties in the state as disaster areas and ordered members of the National Guard to assist in evacuations and flood controls.

“We are committed to help local responders in these and other impacted counties ensure the safety of people affected by this unusual December flooding,” he said.

Left: A motorboat travels on a Missouri highway after more than a week of widespread flooding throughout the South and Midwest. At least 24 people were killed and several more are missing. Photo U.S. Coast Guard Via Getty Images