At LGBT landmark Stonewall, a community in mourning

On Sunday, hours after at least 50 people were killed in a shooting in a gay club in Orlando — the LGBT community and its allies gathered to pay tribute at The Stonewall Inn, the historic site of the 1969 riots that sparked the gay rights movement.

By midday, a small crowd had formed in front of the bar. A few people placed flowers on the sidewalk, while others sat across the street to talk or take photos. Inside, every seat in the dimly-lit bar was filled. 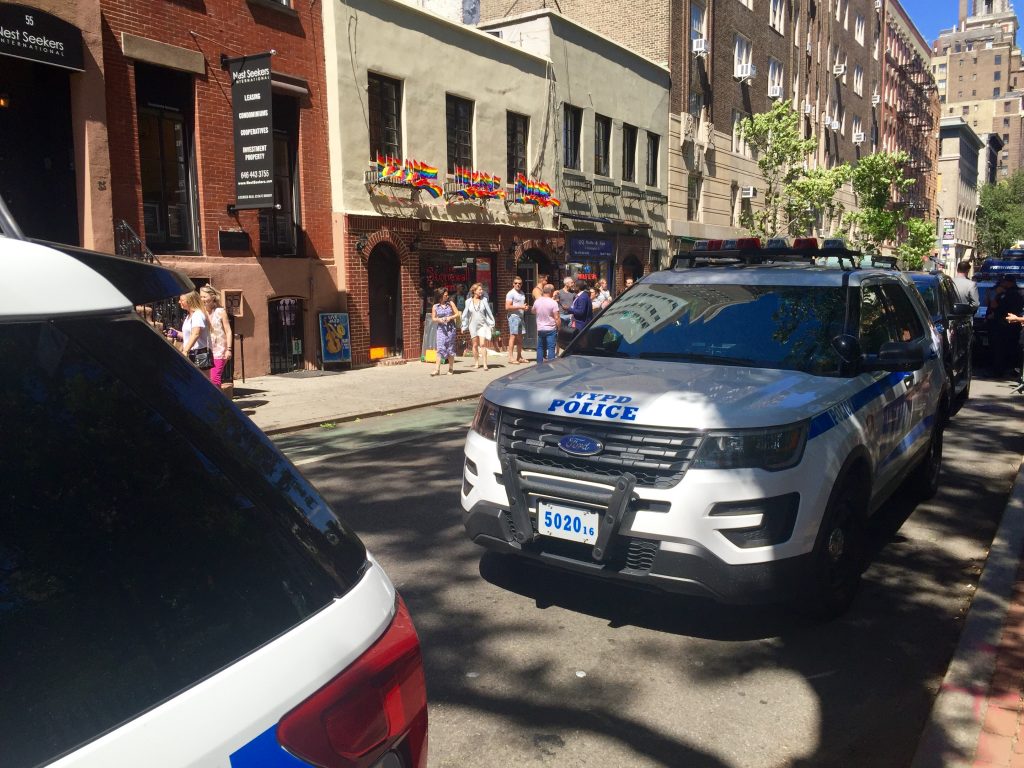 John B., 70, said he has been coming to Stonewall since he moved to New York 35 years ago. He stopped visiting in recent years, but this morning, when he awoke to the news from Florida, he headed to the bar.

“I go for a walk to the pier every Sunday, but I made a pit stop to come here,” he said. “To check in on the community, you know?”

The Stonewall Inn has been the symbolic heart of the American gay community for decades, ever since protesters led by transgender women of color clashed with cops who raided the bar.

This month, it was announced that the bar, already a National Historic Landmark, is poised to become the first LGBT national monument. 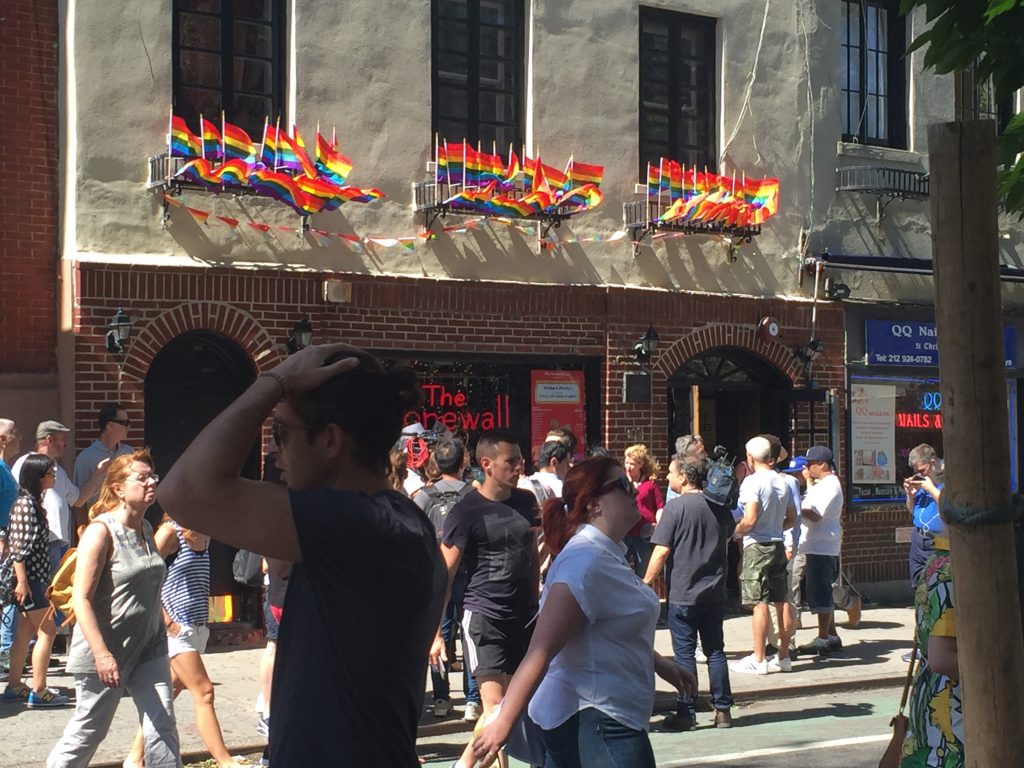 Dwayne Howard, 54, said he stood in front of Stonewall because “it’s the place to come.”

“I came to make my presence known, to be here — that’s all you can do,” the Brooklyn native and Stonewall regular said. Howard said he came to the bar after the Supreme Court ruling last summer that legalized same-sex marriage nationwide. “And now I’m here, after this tragedy.”

Kayla McGovern, 19, is a student at the nearby Fashion Institute of Technology. She has never been inside Stonewall, but stood outside the bar on Sunday after the massacre.

She said staying away “really wasn’t an option. My first thought was: I have to go to Stonewall now.”

A vigil is planned in front of Stonewall for tomorrow evening. 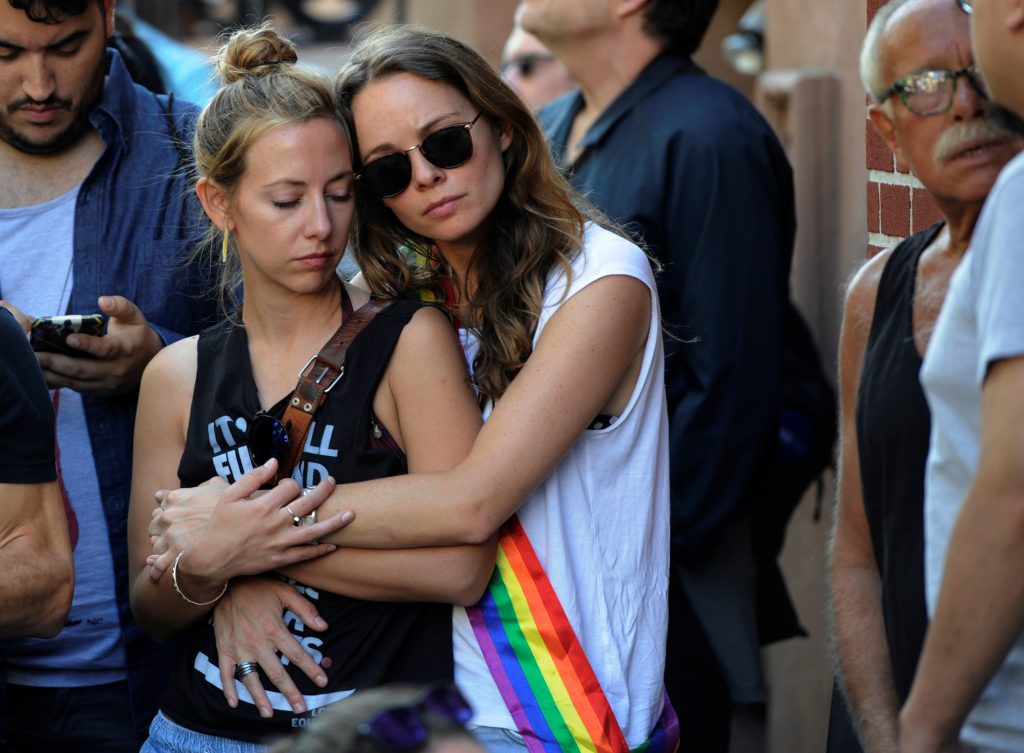 Two women hold each other at a vigil outside The Stonewall Inn on Christopher Street, considered by some as the center of New York State’s gay rights movement, following the shooting massacre at Orlando’s Pulse nightclub, in the Manhattan borough of New York, U.S., June 12, 2016. Photo By Mark Kauzlarich/Reuters

Elsewhere in the city across from Washington Square Park about 150 people met around the steps of the Judson Memorial Church for a vigil Sunday night.

For an hour, an interfaith assembly spoke of acceptance and forgiveness as religious leaders and members of the Muslim, Christian and Jewish faiths, and others, met in memory of the victims. 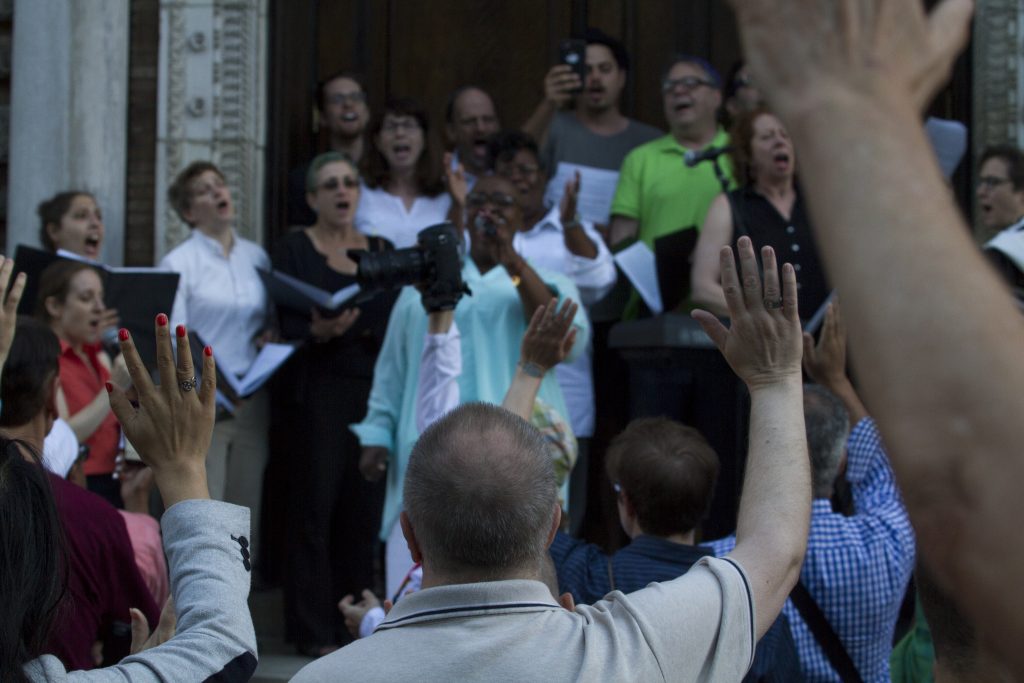 Those attending a New York City vigil for the Orlando shooting victims raise their hands in solidarity outside the Judson Memorial Church near Washington Square Park. Photo By Daniel Moritz-Rabson/PBS NewsHour

Flynn Tan, a 21-year-old from Florida, described the shock of waking up to the news of a mass shooting.

“I couldn’t believe it was something that actually happened,” she said. “It was the first thing that I woke up to. It was terrifying and disgusting and just thinking about how many friends that I know in the Orlando area was terrifying, too.”

She viewed her attendance of the vigil as a moral obligation, saying “I figured since I was in this area, it wouldn’t be right for me not to come.” 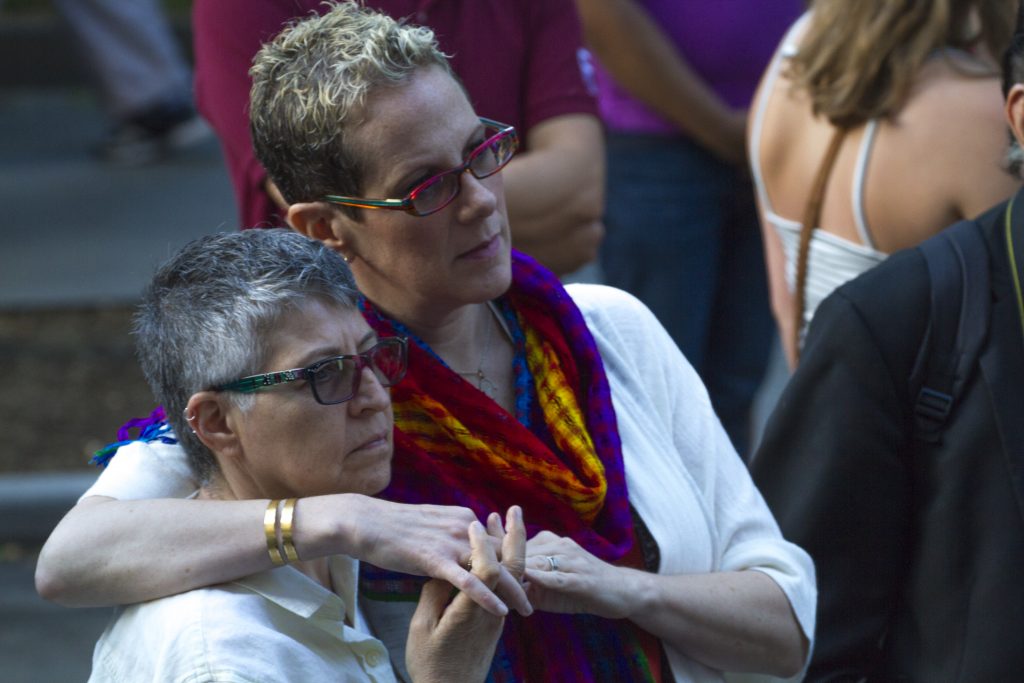 A couple interlocks fingers while listening to speeches at a multi-religious vigil in New York City. Photo By Daniel Moritz-Rabson/PBS NewsHour

Cornelius Graves, 25, noted the importance of the presence of individuals representing a range of faiths.

“I think the most poignant thing for me is it shows people coming together,” Graves said. “It means something that people of multiple faiths come together.” 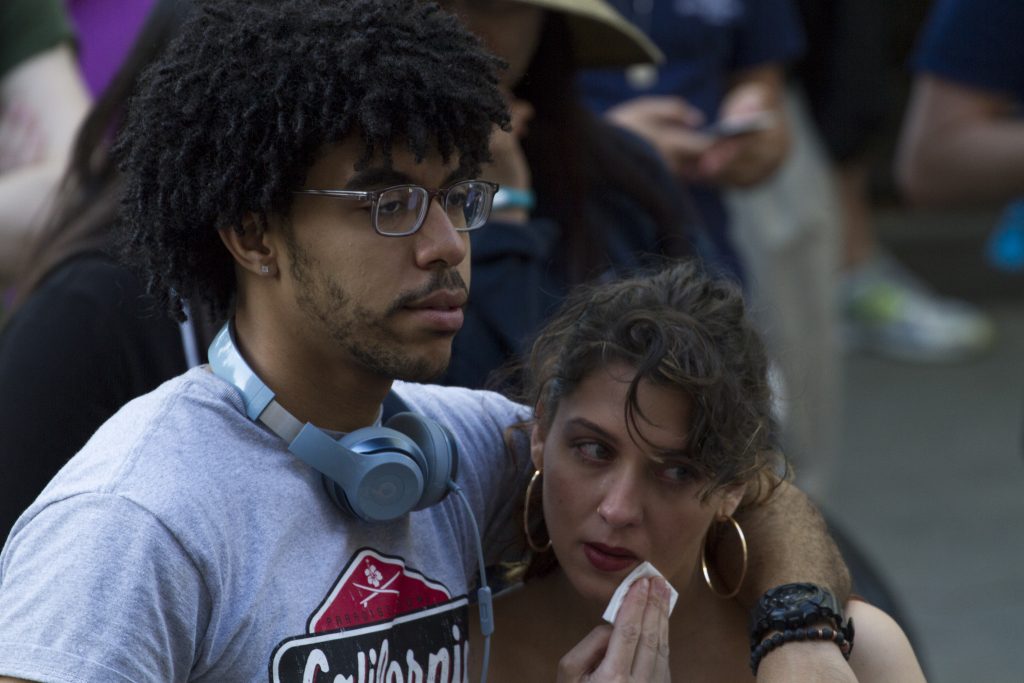 A woman dries her tears during a New York City vigil for the victims of the Orlando shooting. Photo By Daniel Moritz-Rabson/PBS NewsHour

The Mayor’s Clergy Advisory Council held the vigil, while New York City Hall was lit up in rainbow colors for LGBT pride at sunset.

Left: Passerby placed flowers in front of The Stonewall Inn on Sunday, June 12, 2016, hours after a gunman killed 50. Photo by Omar Etman/PBS NewsHour