Architect Laura Fitch describes cohousing communities as “privacy within your home and community at your doorstep.”

Cooperative living arrangements have existed across a number of cultures for centuries. But the concept took a new form in Denmark in the early 1970s with the establishment of Sættedammen, a cohousing community in which residents retain a private living space while sharing common facilities like a kitchen, laundry and play area. The people who live there are responsible for cleaning and maintaining shared spaces and plan community activities such as shared dinners.

Since then, the concept has spread to the U.S. with the creation of dozens of cohousing communities around the country. Fitch first learned about them while studying architecture in Denmark about a decade after Sættedammen was built. Having lived in a cohousing community for more than 20 years, now she designs them for other groups as principal and co-founder of Kraus-Fitch Architects.

We spoke with her about her personal experience with cohousing, the design considerations that inform her process and how to create a cohousing community.

How you would describe cohousing to someone who’s never heard of it before?

It’s a concept of community. Everyone wants community in their life, but they tend to want the privacy that we’re used to having within their home. [Cohousing] is very different than any commune or anything from the past, in that it really values independence, but at the same time, cooperation and community. Generally people come together, they sort of self-form around the friends who start the idea and publicized the idea, but typically they are, the future residents are involved in the design process.

In cohousing you have extensive common facilities, and you control them yourself, you cooperatively manage them. It’s not like the condo association manages them. The design process and the management process are things that actually mix the community together so that you have to get to know each other in order to make these decisions. Once you get to know each other you really value each other. That’s what community is all about.

Is that why you think some people are drawn to this type of housing?

Most people have experienced communities in their lives, whether it’s through their dorms when they were in college, or through cooperative households when they were in college, or maybe if they went to summer camp. I think people have had a taste of that, and then once they’re off living on their own and realize how isolated they are, they yearn for that. And they forget that it’s even possible, and then they learn about cohousing and they think ‘Oh wow, this feels familiar, this is great.’ So I think people forget that that’s a possibility, but then when they remember, they wonder why they don’t have it. 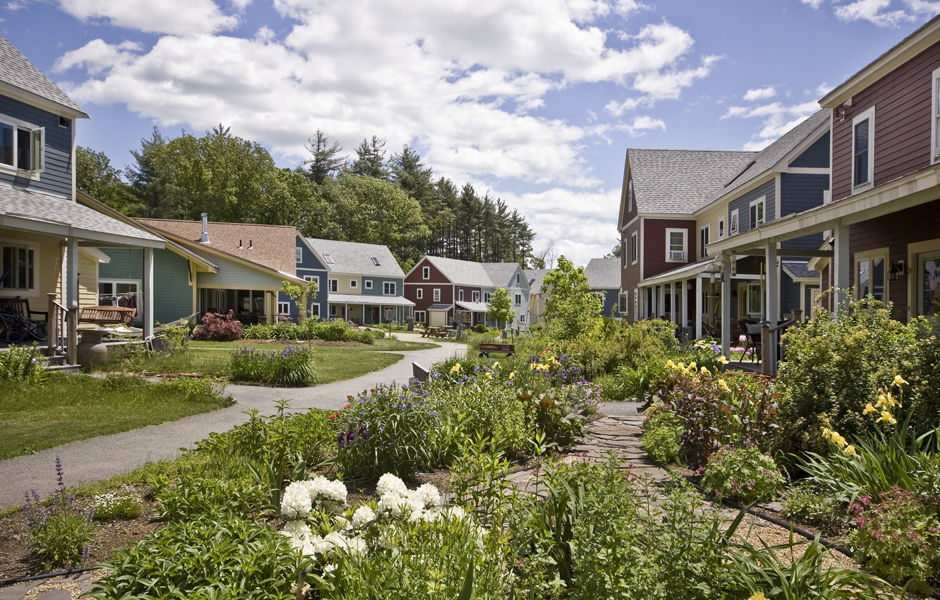 When did you first become interested in this type of housing?

I studied in Denmark in 1980, and that was at the beginning of the cohousing movement there. Since I studied architecture the class actually went to a number of cohousing communities to study them, and it looked very familiar and comfortable to me, because I had some good community experience in my past.

Then I returned and finished architectural school and sort of forgot about it, [but] then a book about cohousing was published in the U.S., and I learned about a group that was forming in my area, and it [was] like, ‘Oh, I know what that is,’ So I joined. We’ve been living in this community now for 23 years.

What particular considerations do you have in mind when you’re designing a community?

In an urban situation most [houses] would be attached, and in suburban situations they’d be more spread apart, but I think the most important thing is the space between the houses, or the corridor between the units, or the corridor between the units and the common house. It’s a space where people travel through. When you’re traveling between your car and the common house, or between your car and your unit, and you pass your neighbors, that’s the opportunity for interaction. So the design of the space along the pedestrian way is really important. It has to be a comfortable micro climate. It has to be a place where you can stand and chat, or sit and chat, or even move away from each other if you don’t feel like talking. 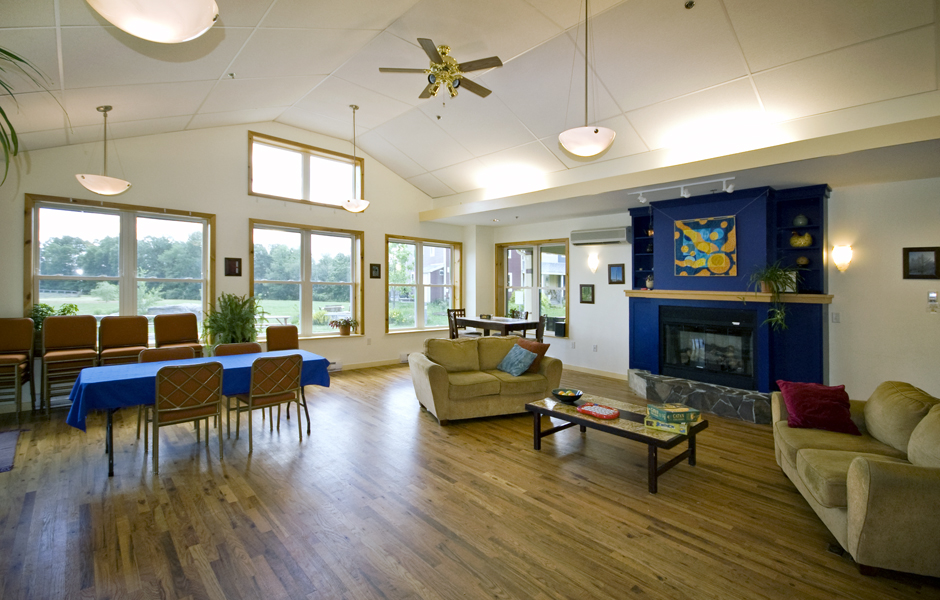 How do you begin the process of designing a community?

Usually a group will contact a cohousing architect like myself fairly early on when maybe they have control of a site, but they don’t necessarily own it yet. And maybe they have half a dozen core members, people who are willing to go through the process, but they’re just starting out.

If we’re looking at site design we would have a site programming workshop. Usually about 10 people is a good number for that first workshop. We get information about the site, whether it’s rural or urban, and we get a little bit of information about the group, about what their vision is. And then we put together some homework, an online survey, ask a lot of questions about maybe if they want their cars close to the house, or whether they don’t want to see the cars, whether they want accessible units or more like townhouses. It would be different with an urban situation — whether they want their houses attached to the common house, whether they want elevators, we ask a lot of questions.

And when we get that information back we can then generate an agenda for the [workshop]. We do enough surveying so that we can say, ‘Okay, they already have consensus about the number of units, but they haven’t made up their mind about the parking. They already know they want the common house in the center, but they haven’t made a decision about whether they want flats or townhouses.’ So we can then go in and confirm where there already is consensus, and help them make decisions where there is yet to be consensus. 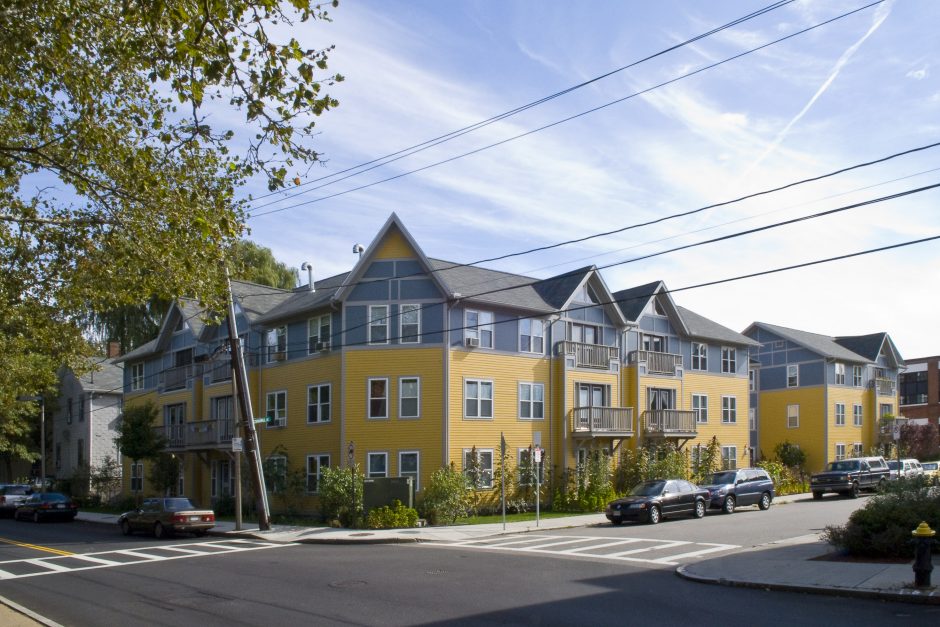 The exterior of a cohousing community in Jamaica Plain, Massachusetts. Photo courtesy of Laura Fitch

What are some common questions people usually have?

Particularly in an urban community, they will say we want, you know, less than one car per household. In a suburban community they’d say we want two cars per household, and some visitor spaces. People have to make some tough decisions about parking based on the expense of building a parking garage, based on how close transportation is, based on their ecological values. So that’s hard. It’s one thing to do that with one household, it’s another thing to have 10 households make those decisions cooperatively. That’s where I think an experienced cohousing architect can help them, can facilitate really tough decisions like that.

The [workshop] itself is usually two and a half days long. We come in on a Friday night, give a slideshow about common house designs, and then on Saturday work with them helping them make decisions about parking and things, and then on Sunday we would actually do hands-on design together. So we actually help the group design their community using manipulative blocks, you know, whether it’s little pieces of wood, or little pieces of paper, depending on what we’re designing, to represent units, or spaces. Through this manipulation they can understand designs. 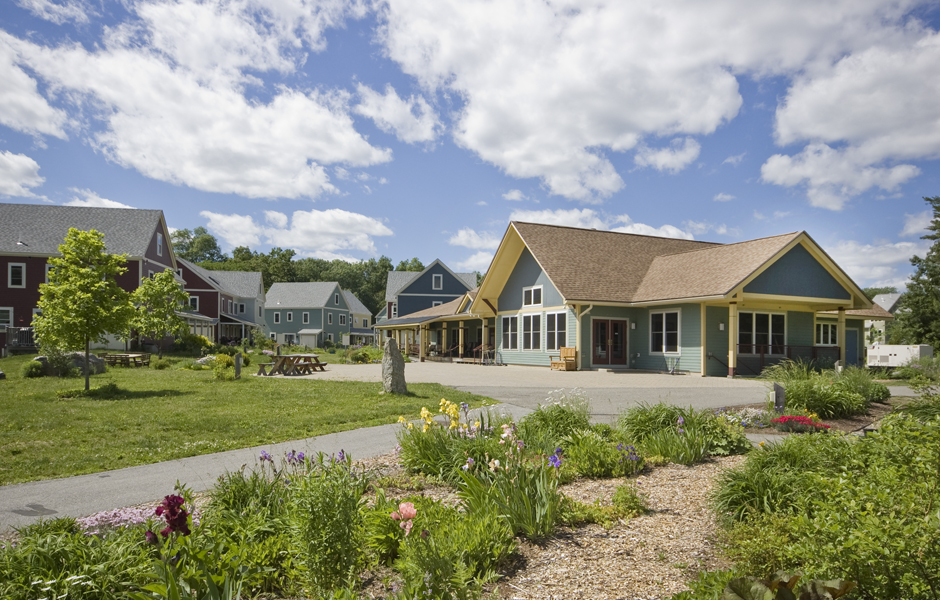 The exterior of the common house at Mosaic Commons in Berlin, Massachusetts. Photo courtesy of Laura Fitch

What are some misconceptions that you encounter around cohousing?

This interview has been edited and condensed.