Neighbors rally to clean up wreckage from Baltimore riots

Protests in Baltimore over the death of 25-year-old Freddie Gray, who died while in police custody, turned destructive Monday afternoon following Gray’s funeral. Rioting began in West Baltimore and continued over the course of the night. According to the Baltimore Sun, 159 fires were set, buildings were damaged and stores were looted. Fifteen police officers were injured, more than 200 people were arrested and two people were shot. 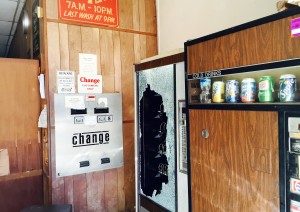 Scene from a looted laundromat near the Bolton Hill neighborhood of Baltimore on Tuesday morning. Photo by James Blue/NewsHour

James Blue, the NewsHour’s senior content and special projects producer, lives in a 19th-century home in Baltimore’s historic Bolton Hill, which sits four or five blocks from the heart of last night’s riots.

All night, he heard noise from the sirens, choppers and demonstrations downtown. And this morning, a block from his house, he captured photos of shattered glass, boarded up windows and a cash register ripped apart during last night’s looting.

“We all think we lived in a civilized place, but this is not civilized behavior,” he said. “Most striking to me, as you can see from the pictures, are all of these candy wrappers, these little incidental things, these KitKats and M&M’s. To think that people are so desperate they need to loot those things, I find that really depressing.” 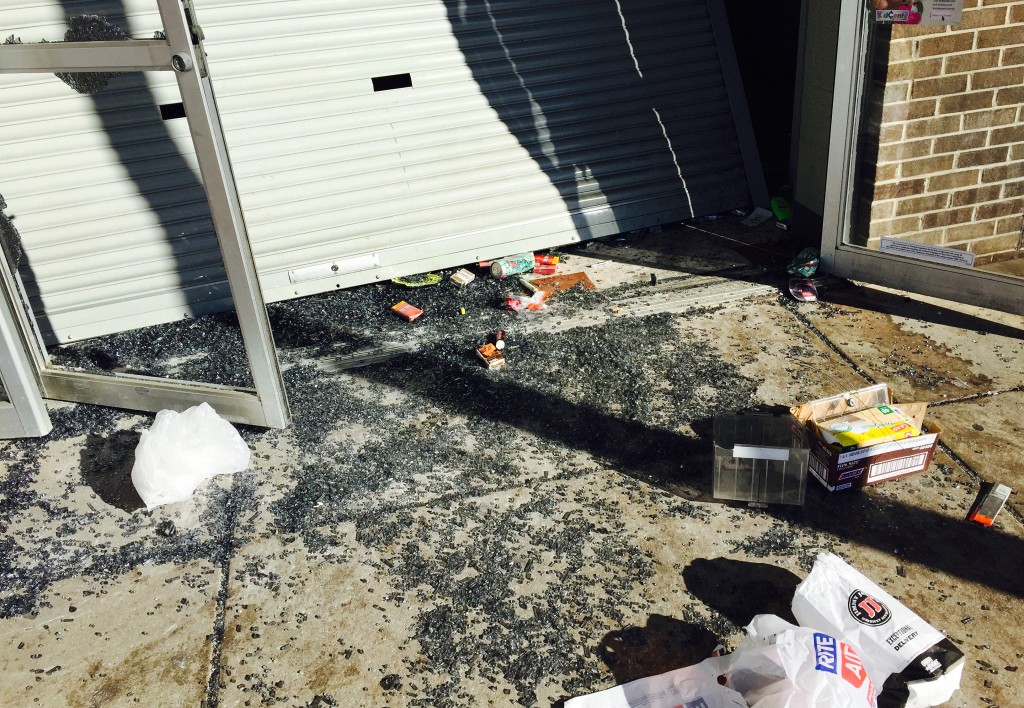 A Rite-Aid pharmacy near the Bolton Hill neighborhood of Baltimore was looted during Monday night’s riots. Photo by James Blue/NewsHour

Photos from a looted Rite-Aid pharmacy, hardware store and Save-A-Lot market show a vending machine busted open and boxes of candy, cookies and Altoids and strewn across the ground. 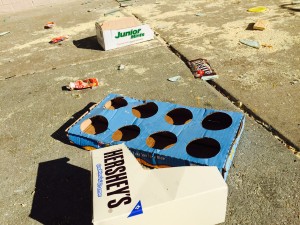 But in the midst of calamity and clashes between residents and police, clean-up efforts are underway. A Facebook event was created Monday night where already more than 2,000 people have committed themselves to taking to the streets in an effort to restore calm to the city. And on Twitter, organizers are using #CleanUpBaltimore and #BaltimoreCleanUp to connect with those willing to volunteer, a stark juxtaposition to those photos of destruction.

Arriving at North Avenue and Pennsylvania to drop off supplies for the cleanup efforts. #CleanUpBaltimore pic.twitter.com/yXEajlsJUT

Taken by my daughter who's up near Penn/North Ave. helping with the cleanup. Good on ya! #CleanUpBaltimore pic.twitter.com/0ULW6TM7S7

I'm headed to help clean up my city. Who's coming with me? #FreddieGray #BaltimoreRiots #baltimorecleanup pic.twitter.com/kSxXsED30Z

Looking for a way to help the Baltimore community? Southern Baptist Church’s senior housing development burned down in Monday night’s riots. You can donate here to help rebuild it.