Why a bartender cleared snow from Boston Marathon’s finish line

After winter storm Juno hit New England on Tuesday, Bostonians got out their skis and shovels to tackle the mess.

One particular image circulated on Twitter, of a man hard at work clearing snow from the Boston Marathon finish line.

The man who took the photo was Philip Hillman II, a regional manager for a California-based vineyard, who was staying at the Charlesmark Hotel in Boston’s Back Bay neighborhood.

He posted the image on Twitter, and it quickly went viral with the hashtag #WhoShoveledTheFinishLine. Even the Boston Police Department noticed it.

As the pictures circulated, Ryan Swann, manager of the Back Bay Social Club recognized the shoveler as Christopher Laudani, a bartender who had started working at the restaurant about six months ago.

Back Bay Social was open during the snowstorm and Laudani shoveled the area outside the restaurant, including the finish line, according to the Washington Post. 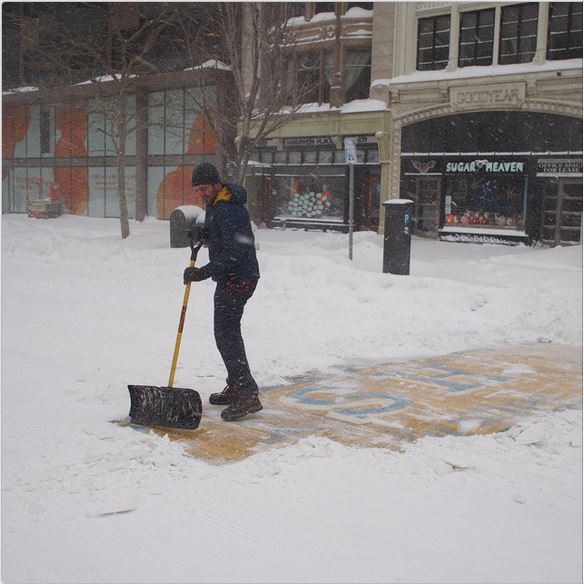 “I’m no hero,” Laudani said in Boston magazine. “I’m just a nut who loves the marathon.”

But as Hillman pointed out in a telephone interview, “I fully understand he doesn’t want to be a hero. But what he did is a symbolic act because of what that plot of land means.”

Laudani told ESPN that to him, and now to a “ton of people,” the finish line “isn’t just a strip of paint in the road. It means so much more to us as a community of Boston and of runners.”

As Boston rides out the sixth largest snowstorm in its history (a couple more inches are expected on Friday), the city is also following the trial of Dzhokhar Tsarnaev, the 21-year-old accused of the 2013 Boston Marathon bombings that killed three spectators and injured 264 others. The trial began Jan. 5, 2015 but opening statements were postponed by a lengthy jury selection.

A spokeswoman for the U.S. District Court for the District of Massachusetts said it’s not possible yet to “specifically target a new start date.”