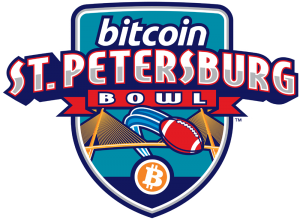 “Our goal is to continue to move bitcoin into the mainstream and sponsoring the St.
Petersburg Bowl offers us that opportunity,” said Tony Gallippi, Executive Chairman in a press release.

The terms of the deal were not disclosed but the previous sponsor, Beef O’Brady’s Sports Restaurant, paid over $400,000 a year since 2010.

This is not the first time the currency made its way into sports. The Sacramento Kings announced in January they would accept bitcoin for tickets and gear and Nascar’s Josh Wise was also sponsored by Dogecoin at the Alabama Talladega Superspeedway back in May. The deal cost $55,000 mostly fundraised from bitcoin enthusiasts.

Other retailers including Overstock.com, the travel site Expedia and satellite tv provider Dish Network have also announced accepting the currency in the past three weeks.

The first Bitcoin St. Petersburg Bowl will begin December 26, 2014 and will run until 2016. Bitcoin purchases for tickets and merchandise will be available later this year through Ticketmaster.