The income gap between black and white households has grown since 2000 and only worsened since the recession.

Yet, a tiny number of places exist where black household income is greater than that of whites. Of the 364 large U.S. counties whose populations are at least 5 percent black, there are seven, according to a Stateline analysis of U.S. Census Bureau American Community Survey data for 2010-14.

Among them: Stafford County, Virginia, an exurban bedroom community of Washington, D.C., and home to military installations, where many black families find contract work or commute to government jobs in the nation’s capital.

Of the 364 large U.S. counties whose populations are at least 5 percent black, there are seven, according to a Stateline analysis of U.S. Census Bureau American Community Survey data for 2010-14.

And in Kendall County, Illinois, a Chicago suburb, black households made $96,146 compared to the $89,236 of whites. In Chicago’s Cook County the $34,935 black median household income was less than half that of whites.

Blacks’ higher income compared to whites in these exurban counties is an anomaly in a nation where income disparity has grown. Pay for blacks, relative to whites, has been shrinking since 2000, according to a study earlier this year by the left-leaning Economic Policy Institute (EPI). Black men make 22 percent less than similarly qualified whites, and black women make 11.7 percent less than white women, the study found. 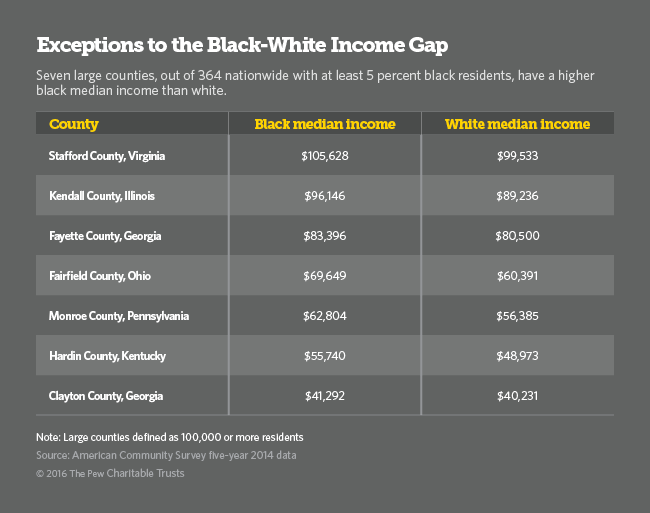 Similarities but No Lessons
Besides being exurban areas, there are other similarities between some of the counties where black household income is greater than for whites. And the similarities don’t suggest a pathway to narrowing the income gap between blacks and whites across the nation.

In those with the highest black income — Kendall County, Illinois; Stafford County, Virginia; and Fayette County, Georgia — college education rates are high for both blacks and whites. Marriage rates also are high, which results in more two-income families that can afford some of the expensive homes there.

College education creates job opportunities, but doesn’t fully explain or solve the black-white income gap, according to the EPI study. Pay for new black male college graduates, for example, is 18 percent below that for white male grads.

The greatest similarities may be their proximity to core urban areas and high-paying corporate or government jobs, as well as their supply of affordable, albeit expensive, homes and good schools.

Besides higher earning power, white households have 13 times the net worth of black households — a gap that has also grown since the recession, according to a Pew Research Center study this year.

Valerie Wilson of EPI said affluent black families may have had to move farther from cities to find the good housing and schools they seek because the black middle class, with less net worth, cannot afford rising housing prices in the cities or private schools.

Andrez Beltran, the economic development coordinator for Kendall County, Illinois, suggests that is the case there.

It’s hard to draw any lesson for reducing income inequality by looking at affluent Atlanta suburbs like Fayette County and the city of Atlanta, said Jim Skinner, senior planner at the Atlanta Regional Commission, which studies demographic trends.

“We can’t say that one geographic area is doing something right compared to any other,” he said.

Corporate, Government Jobs
Fayette County is reflective of the few counties where there is income parity. It is a draw for black managers at large corporations and government agencies based in Atlanta.

“African-Americans here generally commute into Atlanta for those corporate jobs at companies like Delta Air Lines, Coca-Cola and UPS. These companies place a high value on diversity,” said Charles Rousseau, a Fayette County commissioner and retired government employee in Atlanta.

A reputation for good schools and quiet neighborhoods of homes on 2-acre lots has made Fayette County a magnet for affluent Atlanta workers of all races. But current home prices ranging up to $560,000 also make the area relatively exclusive.

“You have to be of greater means to move to Fayette County because of the housing market there,” Skinner said. “That’s not an answer to the societal problem of economic inequality — rather it helps explain why it exists in the first place.”

Commuting to good-paying jobs about 50 miles away in Washington, D.C., combined with government jobs nearby, also helps explain why the population of Stafford County, Virginia, is still growing and the black-white income disparity doesn’t exist. Marine Corps Base Quantico, where the FBI Academy also is located, is partly inside the county.

“I work in D.C., and to me that’s just too busy. Here it’s a little quieter and slower and much safer. It’s a nice town to live in,” said Trimetria Singleton, president of Stafford County’s NAACP and a U.S. Justice Department employee in Washington.

Frank White, a retired Air Force officer and lifelong Stafford County resident, said many children of farmers like him joined the armed forces and came back home to retire, often building wealth by selling family land for development or doing contract work for the nearby military installations.

“Where the federal government is a major employer, you tend to see [racial] differences in income are not as large.”

“You have a lot of [black] people leaving the military brass and then they go into contracting for the military bases in Northern Virginia,” said George Derek Musgrove, a University of Maryland associate professor specializing in African-American history.

“Where the federal government is a major employer, you tend to see [racial] differences in income are not as large,” Wilson said.