A police officer in a San Diego suburb shot and killed an unarmed black man Tuesday, after the 30-year-old drew an object and took a “shooting stance,” El Cajon, California, authorities said.

The El Cajon Police Department said in a statement late Tuesday that officers responded to 911 calls of a man “not acting like himself” outside a strip mall, adding that the man was “walking in traffic, not only endangering himself, but motorists.”

Police said the man repeatedly ignored demands from the first officer on the scene to remove his hands from his pockets. The man hadn’t complied with the instructions by the time a second officer arrived at the scene with a Taser.

“At one point the male rapidly drew an object from his front pants pocket, placed both hands together on it, and extended it rapidly towards the officer taking what appeared to be a shooting stance, putting the object in the officer’s face,” El Cajon Police Chief Jeff Davis told reporters at a news conference Tuesday night.

In response, Davis said, one officer discharged a Taser to subdue the man, while another officer simultaneously fired his firearm.

Davis said investigators are reviewing video recovered from the scene. One witness has come forward with their video footage of the incident. Police also have not identified the object the man was holding, but said it was not a weapon.

One bystander at the scene captured parts of the shooting aftermath as officers put up police tape. A distraught woman in the bystander’s Facebook Live video identified herself as the man’s sister, saying that she called the police for help.

Another shootin of a unarmed black man

“I just called for help, and you came and killed him,” the woman said as she cried. “I called these people three times to help him.”

When a police officer approached the woman to get info about her brother’s medical history, she responds, “Is he alive? You guys killed my brother.”

One witness told NBC 7’s Ashley Matthews that the man had his hands out to the side. Police disputed such recounts of the incident, releasing a still from a bystander’s cell phone video that appeared to show the man pointing the unidentified object at an officer. 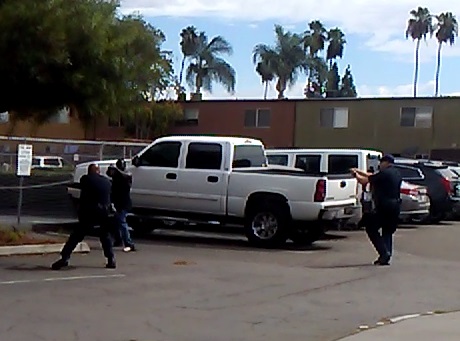 Police in El Cajon, California, released this still from a bystander’s cell phone footage shortly after the fatal shooting of an unarmed black man Tuesday. It shows the man holding up an unidentified object toward an officer. Police said it was not a weapon. Image provided by El Cajon Police Department

The officers involved in the shooting have been put on administrative leave for three days, CNN reported. Their names have yet to be released.

Police have not yet released the name of the man shot, but a family friend identified him as Alfred Olango to New York Daily News, adding that he was mentally challenged.