SELMA, Ala.– The Bloody Sunday 50th anniversary commemoration continued Sunday with gatherings and other events in Selma before a group retraces the steps that helped secure equal voting rights 50 years ago.

As dawn broke Sunday, a crowd gathered for the Martin Luther and Coretta Scott King Unity Breakfast at Wallace Community College. Other expected events Sunday include film screenings and a pre-march rally at the foot of the Edmund Pettus Bridge.

Police beat and tear-gassed marchers at the foot of the bridge in Selma on March 7, 1965, in an ugly spasm of violence that shocked the nation. The attack on demonstrators preceded the Selma-to-Montgomery march, which occurred two weeks later. Both helped build momentum for congressional approval of the Voting Rights Act later that year. 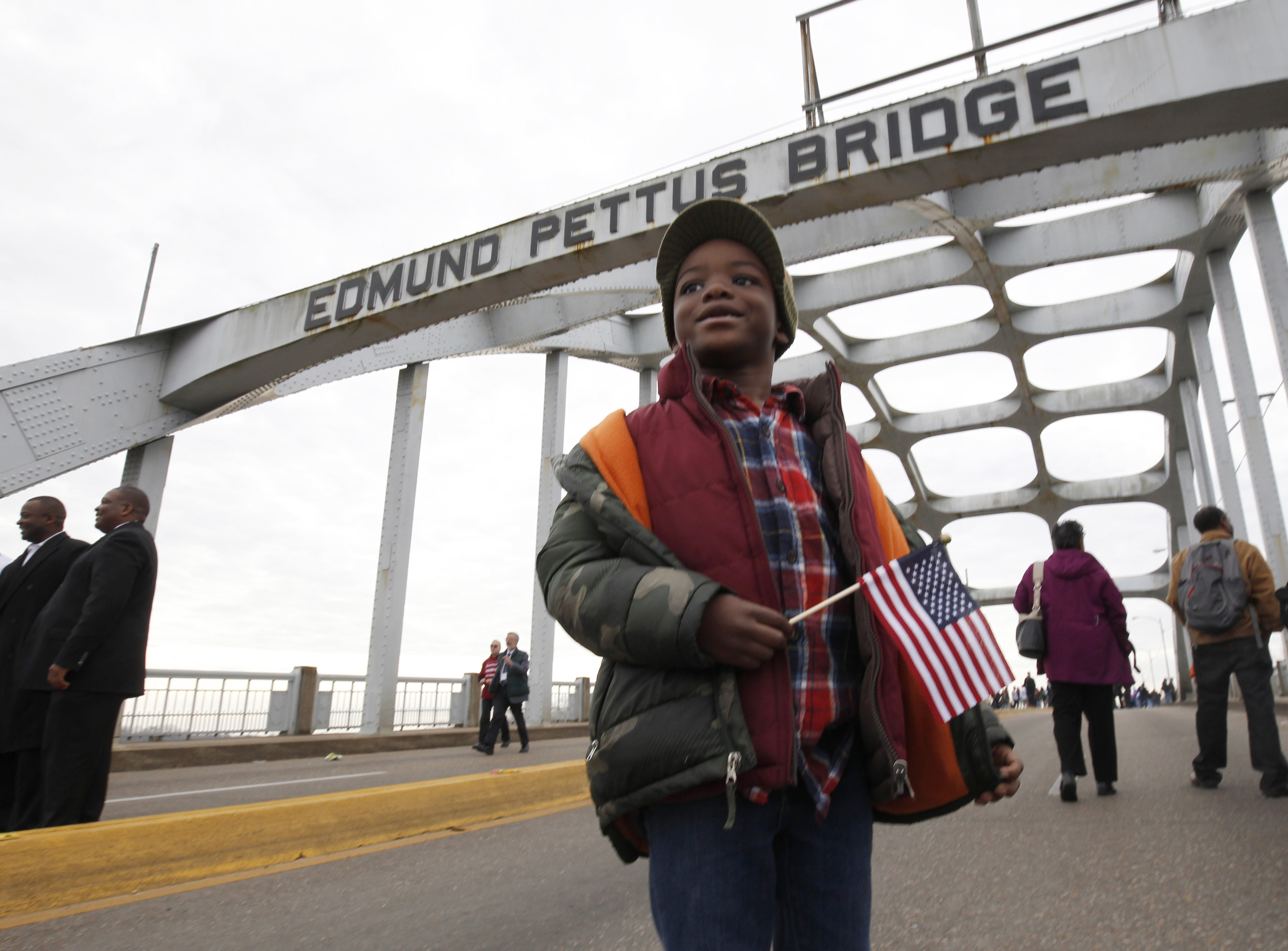 Kendarius Vickers, 5, stands on the Edmund Pettus Bridge as he waits for his family before the beginning of the 50th anniversary of the Selma to Montgomery civil rights march in Selma, Alabama March 8, 2015. Credit: REUTERS/Tami Chappell

A march from Selma to Montgomery in remembrance of the journey the demonstrators took is set to begin Monday morning and culminate with a rally at the Alabama state Capitol on Friday afternoon.

Thousands gathered Saturday in the town of roughly 20,000 to hear speeches from leaders including President Barack Obama and Georgia Rep. John Lewis – an Alabama native who was among the demonstrators that was attacked by law enforcement on a march for equal voting rights.

Both gave rousing speeches on the work left to be done to achieve equality and Obama also touched on improvements in American race relations. The president mentioned recent high profile clashes between citizens and law enforcement on the circumstances leading to fatal police shootings and law enforcement tactics toward minorities. 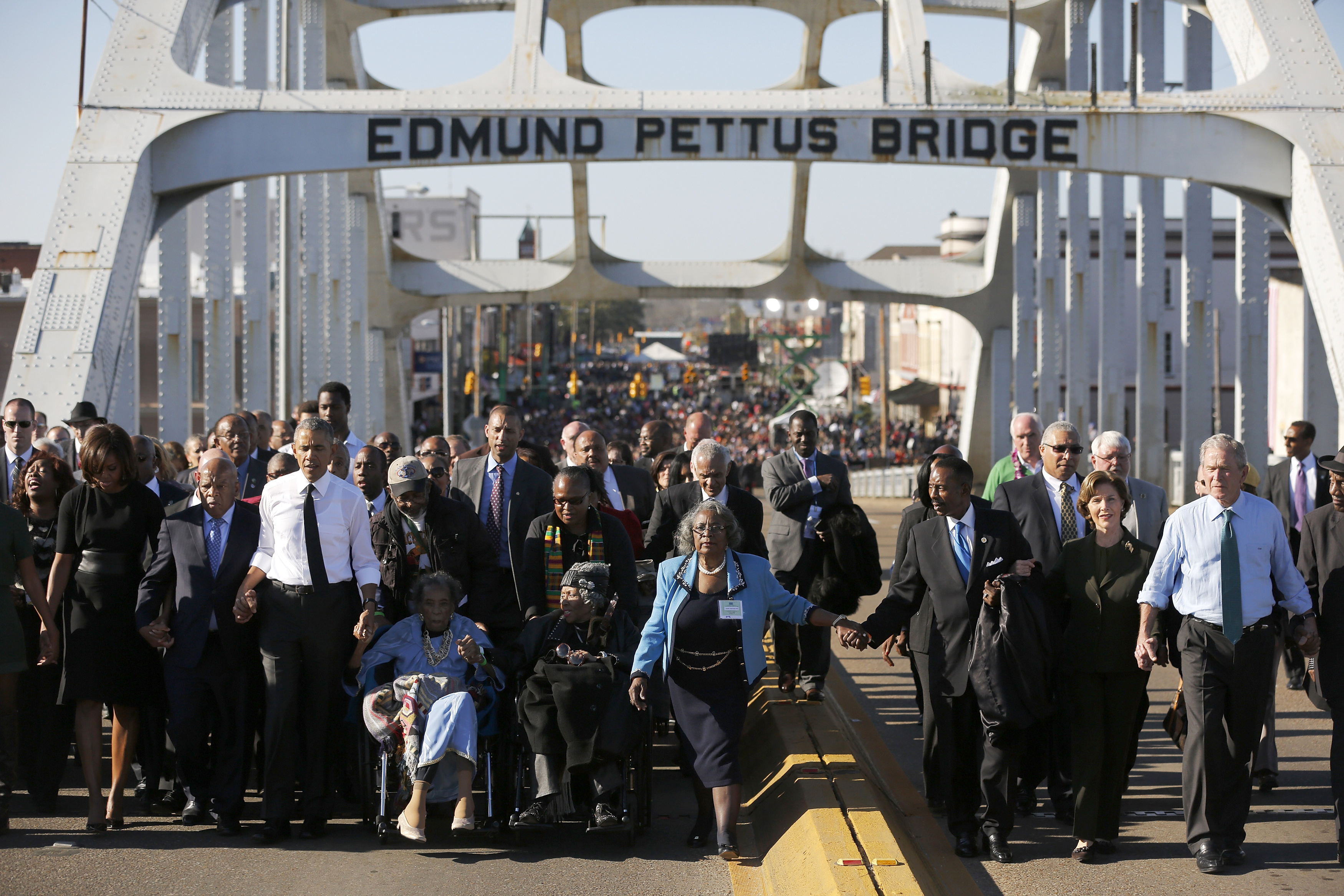 “We just need to open our eyes, and ears, and hearts, to know that this nation’s racial history still casts its long shadow upon us,” Obama said. “We know the march is not yet over, the race is not yet won, and that reaching that blessed destination where we are judged by the content of our character requires admitting as much.”

The president also addressed notions that the prejudice that characterized the civil rights era exists in more insidious forms today and little or nothing has changed since then.

“Ask the female CEO who once might have been assigned to the secretarial pool if nothing’s changed. Ask your gay friend if it’s easier to be out and proud in America now than it was 30 years ago. To deny this progress – our progress – would be to rob us of our own agency, our responsibility to do what we can to make America better,” he said.

Bishop Dennis Proctor of the Alabama-Florida Episcopal District said his group brought five buses to the anniversary commemoration. But he told members not to come to Selma if they couldn’t commit to fighting to restore protections in the Voting Rights Act that were recently eliminated.

The U.S Supreme Court in 2013 struck down section 4 of the Voting Rights Act which required states with a history of minority voter suppression to get permission from the Justice Department before changing voting laws.

“I think within every human being there’s a desire to be validated,” Proctor said before Sunday’s unity breakfast. “For African-Americans, especially in this state, validation came at the ballot box.”

Proctor said it was bittersweet to commemorate the 1965 march and legislation when what many people consider the critical component of the Voting Rights Act is no longer in place. Fifty years after fighting for equal voting rights, black people and other minorities still face serious opposition when it comes to legislation to protection from discrimination, he said.

“It seems like the clock is being turned back 50 years. After all of the strides that have been made, all of the blood that has been shed,” said state Sen. Vivian Davis Figures, a Democrat from Mobile.

This report was written by Kim Chandler and Phillip Lucas of the Associated Press.

Left: President Barack Obama participates in a march across the Edmund Pettus Bridge in Selma, Alabama, March 7, 2015. Crowds gathered Sunday march 8, 2015 for other events to commemorate the 50th anniversary of Bloody Sunday, which spawned a landmark voting law. Photo by Jonathon Ernst/Reuters