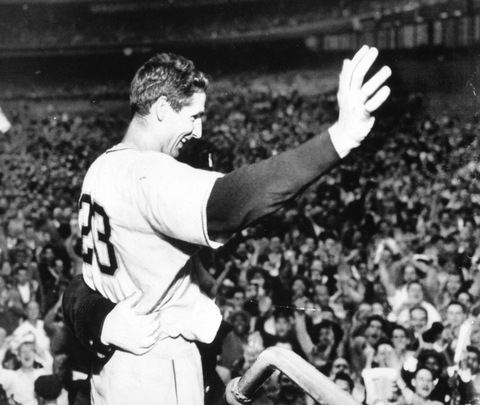 For generations of baseball fans, Bobby Thomson’s dramatic 9th-inning home run off pitcher Ralph Branca in the deciding game of the 1951 National League playoffs remains one of the sport’s most iconic moments. With the announcement that Thomson died Monday at age of 86, we take a look back at Thomson and his role in baseball history.

Thomson hit the game-winning three-run shot for the New York Giants over dreaded rivals, the Brooklyn Dodgers. It capped a remarkable comeback by the Giants who won 37 of their final 44 games and made up a 13 1/2-game deficit to the Dodgers in the standings, forcing a playoff. As the years went on, rumors grew that the Giants had “stolen signs” that day and that season, giving them an unfair advantage.

Joshua Prager investigated that question in depth when he was a reporter for the Wall Street Journal, culminating in a major article and a book called “The Echoing Green: The Untold Story of Bobby Thomson, Ralph Branca and the Shot Heard Round the World.” We spoke by phone with Prager Tuesday about that game and Thomson, whom Prager said he considered a friend after spending hundreds of hours with him.

Take us back to the moment Bobby Thomson hit the home run. How huge a moment was that in baseball?

JOSHUA PRAGER | It was sort of the perfect storm. It had every ingredient necessary to create a great moment on the field and off. First of all, it combined the greatest rivalry in sports then, the Dodgers and the Giants. It was what was then considered the greatest sport — baseball. It was in the center of the sports world which was New York at the time. It culminated the greatest comeback that had been seen in baseball; the Giants had been all these games behind the team they tied on the last day of the season. And then it was scripted like a movie where in the bottom of the 9th, Bobby Thomson hits a home run and they come back to win it.

Most important, it was the first nationally televised sporting event that was live. It was the most famous baseball call of all time, Russ Hodges saying “The Giants win the pennant! The Giants win the pennant!” It had a magic name: “The Shot Heard `Round the World.” It was like a muse for some folks, everyone from Don DeLillo who used it in “Underworld” to Francis Coppola in “The Godfather” to Woody Allen remembering it. Everyone uses it to communicate a great moment. It was a life marker for everyone who remembered that day. It was a tragedy for Dodger fans but it was remembered as vividly as great tragedies. A whole generation of people remember where they when it happened.

Fill in the picture a bit about the kind of player Bobby Thomson was.

JOSHUA PRAGER | He had incredible gifts, he had blinding speed, he was one of the fastest men in all of baseball if not the fastest. And he also had great power. He would have made it to 300 home runs which was an enormous milestone at the time had he not gotten injured. What he didn’t have was the makeup of a stud athlete. He was way too meek and humble and self-deprecating and kind. It’s easier to be Pete Rose and succeed than to be Bobby Thomson and succeed. When he hit the home run, he felt very bad for Ralph Branca in the weeks and months after the game. He knew how hard life became for Ralph. Ralph was hounded by writers and fans for years to come. It is not easy to be reminded of your worst moment for the majority of days of your life. Bobby Thomson told me he did not want to succeed when he faced Ralph Branca in the months and years following this. And the record bears this out.

JOSHUA PRAGER | He was generous and funny. He was simple but smart. And he was a family man. He adored his family. He did not like the spotlight. He became a paper bag salesman for many years. He did not want to cash in on his name. He was a working stiff, as he put it. He lived in Watchung, N.J., for decades.

Your reporting found that the Giants were stealing signs at the time. How did they do that? How did that work?

JOSHUA PRAGER | Before every pitch, a catcher wiggles his fingers to tell the pitcher what kind of pitch to throw. Generally, the catcher will tell him to throw a fastball or a curve or a change-up. In theory, it helps the batter to know what is coming, though there is some debate about that. Now when the Giants were in the Polo Grounds, they had a clubhouse out in center field and manager Leo Durocher had an office there. The Giants cut a hole in the wire mesh of the window of the clubhouse and they put a telescope on the tripod behind that hole. They peered through at the catcher’s finger signals. Then, very quickly, they figured out a way to get that information to their batter. They did that through a two-step system. They pressed a button that rang a buzzer in bullpen in right field. The pitcher (in the bullpen for the Giants) relayed the signal to the batter.

The Giants started doing it July 20, 1951, through Oct. 3 of that year. They told me they did not do it in the World Series because they were worried they would be spotted during the Series because the clubhouse was so filled with reporters.

What did your reporting find about whether the giants were stealing signs during the playoff game and when Bobby Thompson was at the plate?

JOSHUA PRAGER | Thomson eventually acknowledged to me that they were stealing signs and he received them. Even on that day and in earlier innings. What he did not acknowledge was that he received signs for that last at-bat where he hit the home run. When I interviewed him about whether it happened during that at-bat, he said, “I’d like to say more ‘no’ than yes. I don’t like to think of something taking away from that home run.” He also said there was an injury at third base when he came to the plate, which was true, and he did not look out at right field. It has led to a great debate. Only Bobby Thomson and the baseball gods know for sure what happened.

This was rumored for 50 years, something nebulous that the Giants were stealing signs. So I went after every detail. I looked at the day they started using it, the telescope they used, I found the name of the late electrician that enabled them to set up a buzzer system.* By doing that, people had to confront this for the first time.

How did it reverberate for these two men for the rest of their careers?

JOSHUA PRAGER | It wasn’t just for the rest of their careers. It was for the rest of their lives. For Thomson, he was the man who hit the most famous home run in baseball history. For Branca, he became the man who surrendered the most important home run. Thomson felt too much had been made of it. He was proud of it. He was proud of that moment. But what I reported colored the one great accomplishment he had. That said, even if you know what pitch is coming, you still have to hit it. And he did.