OMAHA, Neb. — A blizzard that paralyzed parts of Colorado and Wyoming barreled into the Midwest on Thursday, bringing whiteout conditions to western Nebraska and dumping heavy rain that prompted evacuations in communities farther east.

Emergency crews responded after a vehicle was swept off a road in Norfolk, Nebraska, and rising water along the Elkhorn River prompted evacuations in the city of 24,000 people. The missing individual had not been found by midday Thursday.

Evacuations also occurred in several other eastern Nebraska communities and at least one Iowa town. Cara Jamison and her neighbors had to leave their homes in Fremont, Nebraska, after water and ice chunks from a flooding Platte River blocked their street. She and her husband moved photo albums to the second floor of their home.

“Photos are the important things,” she said. “Furniture can be replaced.”

South Dakota Gov. Kristi Noem closed all state offices Thursday as the blizzard conditions moved in, and later in the day ordered the opening of the state’s Emergency Operations Center to handle the response to the blizzard and flooding. The state was preparing an emergency declaration, Noem said. The Red Cross opened shelters in Sioux Falls and Yankton. 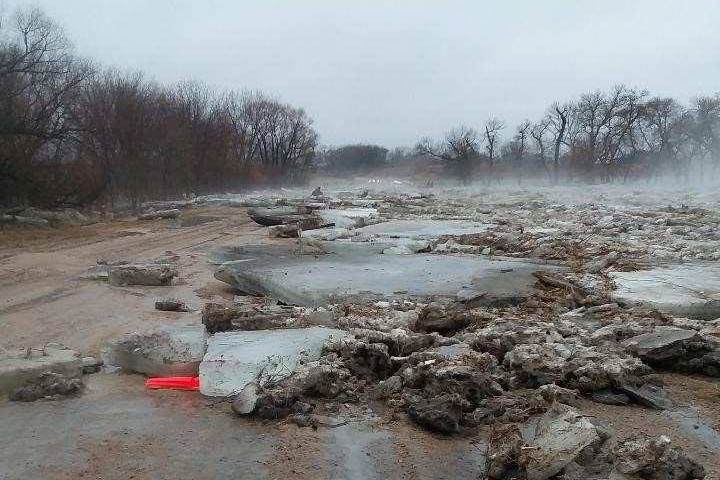 Ice blocks brought by flood waters lie on the road in Howard County, Nebraska, on March 13, 2019 in this picture obtained from social media on March 14, 2019. Photo by Brig. Gen. Wendy K. Johnson/via Reuters

Heavy rain caused flooding in eastern parts of South Dakota and Nebraska, as well as in Iowa, where all or part of nine state parks were closed due to rising flood waters. Iowa Gov. Kim Reynolds signed an emergency disaster proclamation Thursday and activated the state emergency operations center.

Several cities in the region have been hit by rain this week, with records set Wednesday in Sioux Falls, South Dakota, and Sioux City, Iowa.

“We’ve got a lot of water, and it’s got to find a way to get out of here,” said Tracy West, mayor of Lennox, South Dakota.

The system was moving out of the central Plains on Thursday, but National Weather Service meteorologist Peter Rogers said flooding is likely to persist into the weekend in parts of South Dakota, Minnesota and Iowa, with deeply frozen ground preventing rain and snowmelt from soaking into the soil.

The massive late-winter storm hit Colorado on Wednesday, causing widespread power outages, forcing the cancellation of hundreds of flights and wreaking havoc on roadways. A wind gust clocked in at 97 mph (156 kph) in Colorado Springs. 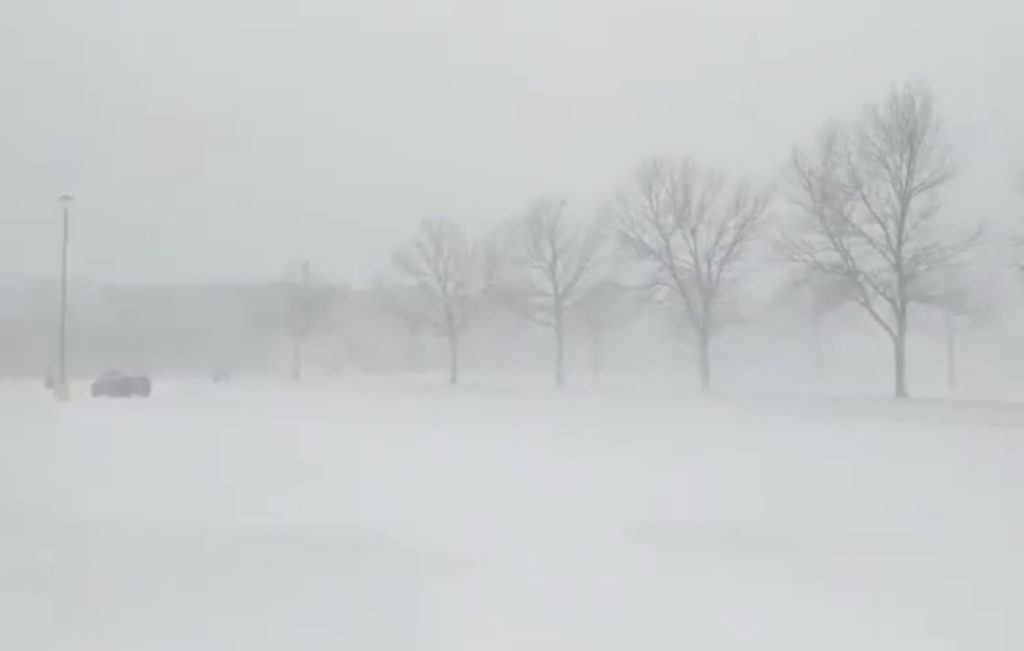 A general view of the blizzard in Greeley, Colorado on March 13, 2019 in this picture obtained from social media. Photo from @PHOTOWILLG/Twitter/via Reuters

Xcel Energy said it had restored power to some 360,000 customers in Colorado but that thousands remained without electricity Thursday. Some may have no power into the weekend.

In the Texas Panhandle, a utility worker was killed while working to restore power amid strong winds pushed in by the storm. And in New Mexico, 36 miners at a nuclear waste repository were trapped underground in an elevator for about three hours because of a power outage caused by the extreme weather. Outages also were reported from North Dakota to Nebraska.

The storm also contributed to the death of Daniel Groves, a Colorado State Patrol officer who was hit and killed by a car as he helped another driver who had slid off Interstate 76 near Denver.

About 50 National Guard soldiers and airmen used specialized vehicles with tank-like treads to rescue 75 people stranded in their cars during the storm. The total number of people rescued statewide is likely higher, as local law enforcement ran separate rescue efforts.

The window-rattling storm brought blizzards, floods and a tornado across more than 25 states Wednesday.

The Red Cross reported Thursday that 620 people had stayed in shelters overnight in Colorado and in Wyoming, where the state Transportation Department reported snow drifts on Interstate 80 that were as high as 10 feet (3 meters).

Jackie Ratcliff stayed in a hotel and on Thursday was waiting in Wellington, Colorado, for Interstate 25 to reopen so she could return to her home in Cheyenne, Wyoming. She had tried to make the trip Wednesday but the interstate was shut down due to a pileup — one she thinks she narrowly avoided.

“I’m feeling pretty lucky,” she said, despite her dog at home needing to be fed.

The window-rattling storm brought blizzards, floods and a tornado across more than 25 states Wednesday, stretching from the northern Rocky Mountains to Texas and beyond.

Five people were hurt and 150 dairy cows had to be euthanized when a tornado hit the small town of Dexter, New Mexico. A tornado also touched down Thursday in western Kentucky , damaging utility lines and trees. There were no immediate reports of injuries.

The culprit was a sudden and severe drop in ground-level air pressure in Colorado, the most pronounced dive since 1950 and something “that will go down in the history books,” said Greg Carbin, chief of forecast operations for the National Oceanic and Atmospheric Administration’s Weather Prediction Center.

It was caused by a combination of the jet stream and normal conditions in the wind shadow of the Rockies. Air rushed into the low-pressure area and then rose into the atmosphere, causing severe weather.

Meteorologists call the rapid change in pressure a “bomb cyclone” or “bombogenesis.”

Left: A policeman talks to a driver as snow clogs the roads in Lone Tree, Colorado, U.S. in this March 13, 2019 handout photo. City of Lone Tree, Colo./Handout via REUTERS