‘But what about our boys?’ The other gender equity crisis

Phrases boys hear their whole lives. They’re echoed in the opening lines of “The Mask You Live In,” a new documentary from filmmaker Jennifer Siebel Newsom that examines the mixed messages we send our boys on what it means to be a man. With so much attention given to the idea of feminism and how women are portrayed in the media — the subject of her first documentary, “Miss Representation” — Newsom decided to turn her focus on the idea of masculinity.

“As I traveled around the world with our first film, ‘Miss Representation,’ I heard the same refrain over and over again, ‘But what about our boys? Isn’t there a boys crisis going on? And, how can we help our boys be part of the (gender equity) solution instead of the problem?’” Newsom told the NewsHour. “Having just given birth to a son, I was beginning to understand the challenges unique to our boys and men and knew I needed to dig deeper into unraveling the damaging masculinity narrative that is fed to our boys and men.”

Newsom isn’t the only one who has expressed concern about this, but still there has been relatively little attention paid to boys’ well-being, and particularly to their academic performance. It’s not only their ability to sit still and pay attention for long periods of time, she said, though that is a factor. Newsom thinks the problem is deeper and there needs to be more attention on all factors contributing to the gender gap. 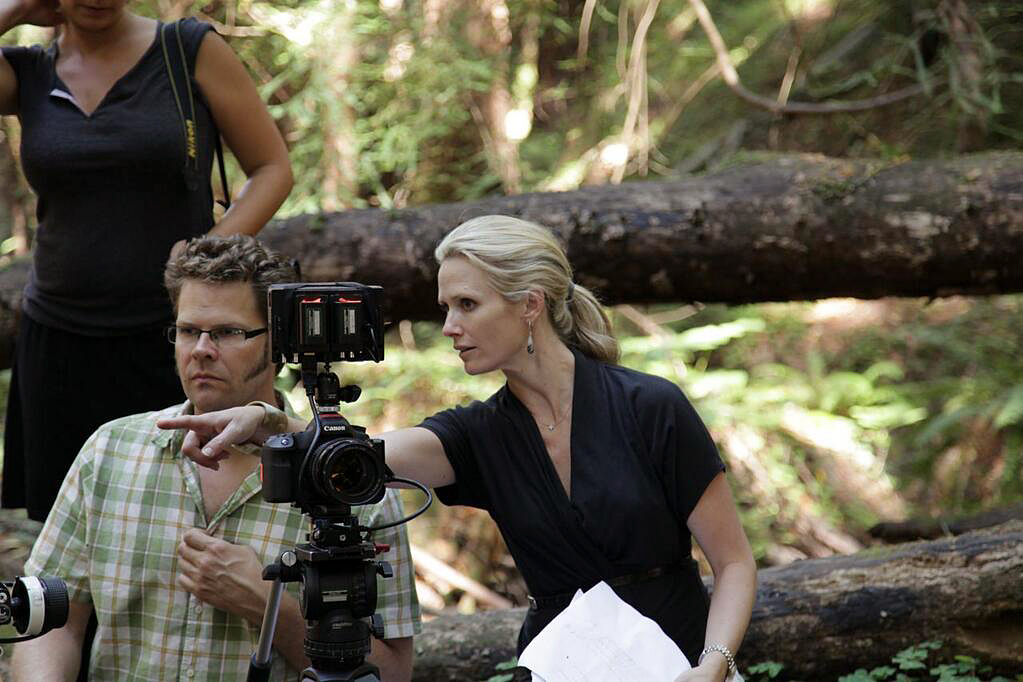 “The Mask You Live In” director Jennifer Siebel Newsom shoots a scene in California. Photo courtesy of @MaskYouLiveIn

“Certainly having less physical outlets during the school day and so few male teachers doesn’t help young men aspire and excel in the school environment. … The problem lies in the larger culture in which we reside and raise our children, purporting that a man’s value lies in his power, dominance and control at the expense of his empathy, care and collaboration. There is still a huge cultural stigma around boys’ and mens’ emotions and personal struggles.”

A lot of this stigma comes from the imagery we surround boys with on what it means to be a man: pictures of strong, often aggressive athletes and music videos with men flaunting money and scantily clad women.

But home life has an impact as well, she said.

“Outside of the classroom, one in three boys go to bed at night without a father in the house. Healthy male role models in many boys’ immediate lives are few and far between.”

“The Mask You Live In” tries to address this cultural stigma and possibly even turn it around. Newsom said what surprised her the most while making the film is how much friendships — that emotional connection — meant to boys and how much joy they get out of being with their friends. That is followed by the loss and sadness they felt when they disconnected from those deep friendships to become “real men.”

The film features an after school group for young men, the Ever Forward Club, that discusses all of these issues. The founder, Ashanti Branch, said he was blown away when he realized how much these “tough” guys needed to talk about their emotions, their anger and their desire to be a good man. Branch tries to help these boys learn how to cope with situations without anger or aggression.

“I tell them all — you have a hammer in your toolbox, but what if you need to build something? You can’t build something with just a hammer and sometimes you don’t even need a hammer. When your teacher tells you to sit up or pay attention, you don’t need a hammer in that situation. So how can we create the tools that you do need so that not every situation ends up with you yelling and being kicked out of class?” Branch said.

It’s not just up to men though. Newsom sites the role feminism has played in challenging these unhealthy gender norms where men are taught to be dominant and aggressive.

“Since men have been at the helms of creating this unhealthy culture, it’s really critical that men be a part of the solution,” she said. “Parity in particular is not possible without the buy-in and healthy engagement of all men.”

“The Mask You Live In” will be released later this year.