Jurors were unable to reach a verdict on Ryan Bundy’s theft of government property charge.

The jury returned its verdict after some six weeks of testimony followed by less than six hours deliberations, and the last minute replacement of a juror after an allegation surfaced that he was biased.

The charges stem from the 41-day armed occupation of the Malheur National Wildlife Refuge near Burns in eastern Oregon’s high desert. The armed protest began Jan. 2 and ended when the final four occupiers surrendered to the FBI on Feb. 11.

Prosecutors initially charged Ammon Bundy, his brother Ryan Bundy, and 24 others with conspiracy to prevent Bureau of Land Management and U.S. Fish and Wildlife employees from doing their jobs at the wildlife refuge in Harney County. Some defendants named in the indictment faced weapons charges for carrying firearms in a federal facility, as well as theft of government property.

Only seven defendants went to trial in September. Others have pleaded guilty or are scheduled to go to trial in February 2017.

Through the government’s case, prosecutors attempted to show the jury evidence about when the alleged conspiracy began, as well as how the occupation unfolded and ultimately ended.

The government relied heavily on testimony from law enforcement, including Harney County Sheriff David Ward, as well as dozens of FBI agents who responded to the occupation or processed evidence at the Malheur refuge after the occupation ended.

“At the end of the day, there is an element of common sense that demonstrates the guilt of these defendants,” Assistant U.S. Attorney Ethan Knight said during his closing arguments during the trial. “These defendants took over a wildlife refuge and it wasn’t theirs.”

Conversely, the defense sought to make its case about a political protest – one about protesting the federal government’s ownership and management of public lands.

“The people have to insist that the government is not our master; they are our servants,” Ryan Bundy said during his closing statement to the jury.

Bundy added the occupation had “nothing to do with impeding and preventing the employees of the Malheur National Wildlife Refuge.” 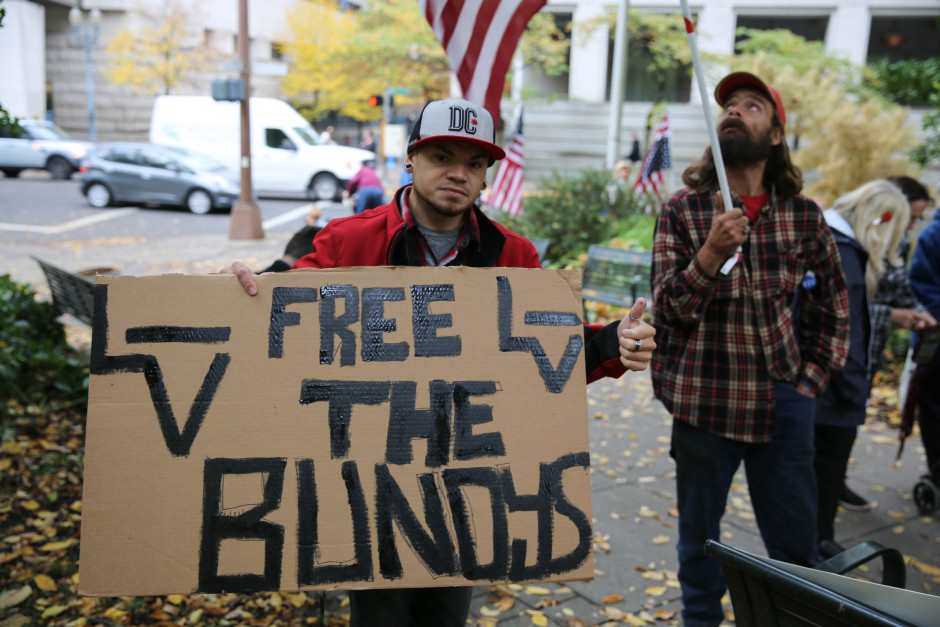 Puyallup, Washington, resident Brian Edgin said, “it’s a sad day in America when our own government doesn’t support the Constitution of America.” Photo by Conrad Wilson/OPB

The occupation in rural eastern Oregon fueled a long running debate about the role of the federal government when it comes of managing public lands, especially for ranching and other natural resource-based professions.

While federal prosecutors worked to keep their case focused on conspiracy, the trial quickly came to symbolize the growing divide between urban and rural America.

“How did any of these people benefit from protesting the death of rural America?” Attorney Matt Schindler, hybrid counsel for defendant Ken Medenbach, said during his closing statements to the jury.

Five of the seven defendants took the stand in their own defense during the trial. Occupation leader Ammon Bundy’s testimony stretched over the course of three days and included stories about growing up on a ranch and his family role in the 2014 armed standoff in Bunkerville, Nevada.

With the first Oregon trial concluded, the Bundy brothers and several other defendants who participated in the Malheur occupation will now travel to Nevada, where they face charges for their roles in the Bunkerville standoff.

Conrad Wilson is a reporter and producer for Oregon Public Broadcasting, covering Southwest Washington based in Vancouver.