The measure is part of a wide-ranging plan to reduce the threat of wildfires, which have killed dozens of people and destroyed thousands of homes in recent years.

Consumer advocates and large energy users blasted legislation they say is a bailout for PG&E, which expects to pay billions of dollars due to fires started by the company’s equipment in Northern California last year. The company would be allowed to charge their customers even if the fires are linked to mismanagement by the company.

California courts have ruled that utilities are entirely liable for damage caused by power lines, even if they’ve followed all safety regulations. Lawmakers considered changing that standard but backed off amid a barrage of lobbying by wildfire victims and insurance companies. 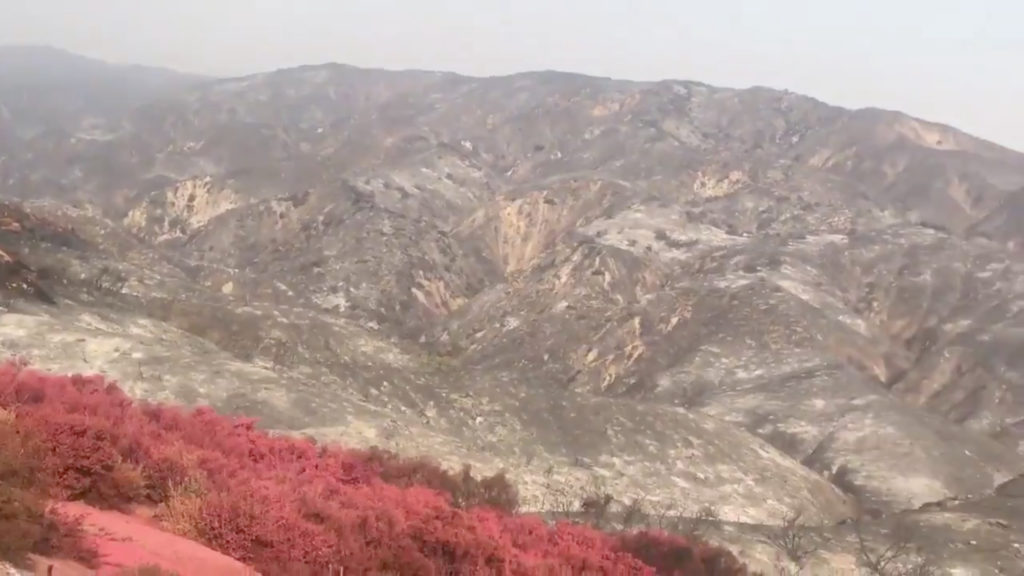 A general view of the aftermath from the Holy fire, in McVicker Canyon, California, on Aug. 11, 2018 in this still image from social media obtained on August 12, 2018. Photo by Carla Harper/Reuters

Fire investigators have blamed PG&E equipment for 12 of last year’s wildfires in Northern California’s wine country, including two that killed 15 people combined. In eight, investigators said they found evidence of violations of state law and forwarded the findings to county prosecutors. Authorities have not determined fault for the Tubbs Fire, the most destructive in state history, which destroyed thousands of homes in Santa Rosa.

PG&E is facing dozens of lawsuits from insurers, which have spent billions settling insurance claims from homeowners.

Lawmakers worry the costs to PG&E could be so severe that it would struggle to borrow money or would file for bankruptcy, which they fear would lead to even higher spikes in utility bills.

“This is about protecting ratepayers, not helping utilities,” said Sen. Bill Dodd, a Napa Democrat who helped craft the legislation. “The fact of the matter is ratepayers would be hurt in a utility bankruptcy.”

Regulators generally don’t let utilities bill their customers for lawsuits linked to imprudent management of electrical equipment, but the legislation would create a special process for the 2017 fires. It seeks to take as much as possible from PG&E’s investors without harming ratepayers. For the rest, the Public Utilities Commission would have the option to let PG&E collect from customers through a line-item on utility bills for the next two decades.

Consumer advocates and large energy users blasted legislation they say is a bailout for PG&E, which expects to pay billions of dollars due to fires started by the company’s equipment in Northern California last year.

The cost to ratepayers is unknown because it’s not clear which fires will ultimately be linked to PG&E and what its final settlement will look like. Dodd said the average residential ratepayer would pay an estimated $5.20 extra for every $1 billion dollars that PG&E must finance.

It includes protections for utility workers from job loss or pay and benefit cuts in the event of a utility bankruptcy or change in ownership. That’s a major victory for the politically connected International Brotherhood of Electrical Workers union.

The bill also would require investor-owned utilities — including PG&E, Southern California Edison and San Diego Gas & Electric — to harden their equipment so it’s less likely to cause fires. It would make it easier, in some circumstances, to do prescribed burns, clear dead trees and brush, log trees and build fire breaks. It includes $200 million a year for those purposes.

It also extends the life of biomass plants, which use trees to generate energy.

Left: A general view of the aftermath from the Holy fire, in McVicker Canyon, California, on Aug. 11, 2018 in this still image from social media obtained on August 12, 2018. Photo by Carla Harper/Reuters