IDYLLWILD, Calif. — Fire stoked by hot and windy weather raged through a forest in far northern California on Thursday. In mountain communities east of Los Angeles, calmer conditions aided firefighters on the lines of a suspected arson wildfire that forced thousands of people to flee.

California Gov. Jerry Brown on Thursday issued emergency proclamations in both Riverside County in the south and Shasta County in the north. The declarations authorize the state to rally resources to local government.

In the north, new evacuations were ordered for communities in the wilderness recreation region near Whiskeytown Lake as that wildfire tripled in size to more than 31 square miles (80 square kilometers). It had already forced residents out of French Gulch, a hamlet dating to the Gold Rush.

French Gulch resident Raquel Hines said she had two hours to evacuate and that others in the former mining town had as little as 30 minutes to leave.

The community has faced two wildfires in the last two weeks, Hines said.

“It’s terrifying. You know you’re frightened a little bit because you don’t know if you’re going to come back to your house and the town is going to be different,” she told KRCR-TV.

Cal Fire Unit Chief Mike Hebrard told the Record Searchlight newspaper that the blaze made a huge push overnight and that engine crews were in the community of Old Shasta trying to save structures.

Hundreds of miles to the south, winds were absent over the fire in Southern California’s San Jacinto Mountains. But temperatures were rapidly rising, and forecasters said highs could hit 100 degrees (38 Celsius). They also warned of possible afternoon wind gusts that could create dangerous fire conditions.

Elsewhere in the state, a huge forest fire continued to grow outside Yosemite National Park. A total of 100 homes were still considered under threat in the San Francisco Bay community of Clayton, although firefighters had stopped the progress of a small fire there after one house burned.

The blaze in the San Jacinto Mountains erupted Wednesday and quickly turned into a wall of flame that torched timber and tinder-dry brush. In a matter of hours, it grew to 7.5 square miles (19 square kilometers).

About 3,200 people in the town of Idyllwild and nearby communities were ordered to evacuate. An estimated 600 homes were threatened.

The fire was the largest of at least five that police believe were purposely set Wednesday by a man whose car was reportedly spotted at the starting point of the blaze in Riverside County, officials said.

Brandon N. McGlover, 32, of Temecula was booked on suspicion of five counts of arson, state fire officials said. It wasn’t clear whether he had an attorney.

William Blodgett of Idyllwild said he couldn’t get home because of the fire and had to wait along with others at a gas station in nearby Mountain Center — until the fire hopped a highway and began to move in his direction.

“We were all peeling out of there as fast as we could,” he told KNBC-TV. “It was apocalyptic.”

Horses and other animals were taken to shelters, as were several hundred children who were evacuated from summer camps. About 200 were at a local high school serving as a shelter, KCAL-TV reported.

The fire in the San Bernardino National Forest sent up a cloud 50,000 feet high that was so enormous it created its own weather in the form of lightning, the National Weather Service reported.

Throughout the day, helicopters and planes dumped water and fire retardant that turned swathes of land and homes pink. Fire engines also were stationed to protect homes. 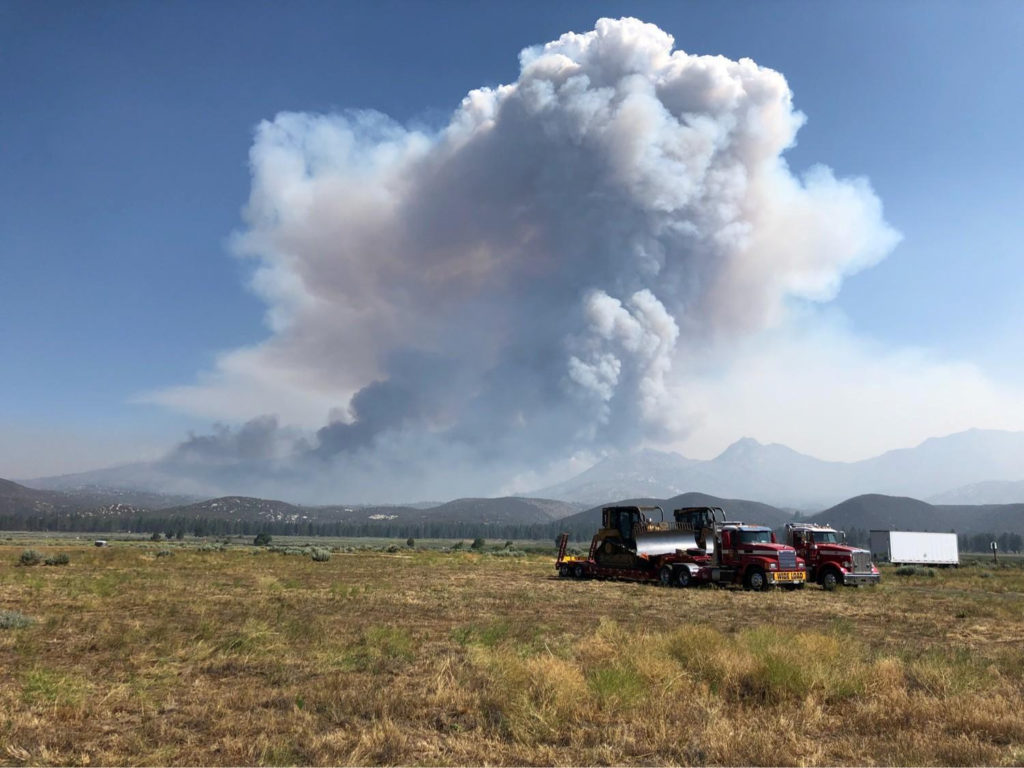 Smoke from the Cranston Fire is shown from east of Lake Hemet in Riverside County, California, U.S., July 26, 2018. USFS/Handout via REUTERS

Yosemite Valley, the scenic heart of the national park, was closed at noon Wednesday during the height of tourist season as smoke cast a pall on the region from a fire in the Sierra Nevada. The closure was heartbreaking for travelers, many of whom mapped out their trips months in advance to hike and climb amid the spectacular views of cascading waterfalls and sheer rock faces.

“We had one guest who planned a weeklong trip,” said Tom Lambert, who owns a vacation rental property near Yosemite Valley. “It was a father-daughter trip, for her high school graduation … Now it’s done. It’s sad.”

Another guest had to delay plans to climb Half Dome.

Officials emphasized that Yosemite wasn’t in imminent danger from the fire, which grew to more than 67 square miles (173 square kilometers) in the adjacent Sierra National Forest. Authorities decided on the shutdown to allow crews to perform protective measures such as burning away brush along roadways without having to deal with traffic in the park that welcomes 4 million visitors annually.

Yosemite Valley will be closed until at least Sunday, along with a winding, mountainous, 20-mile (32-kilometer) stretch of California’s State Route 41 that leads into the area, Gediman said.

At least 1,000 campground and hotel bookings were canceled — to say nothing of the impact on day visitors, park workers and small businesses along the highway, Gediman said.

Over nearly two weeks, flames have churned through 60 square miles (155 square kilometers) of timber in steep terrain of the Sierra Nevada just west of the park. The fire was just 25 percent contained.

More than 3,300 firefighters are working the fire, aided by 16 helicopters. One firefighter was killed July 14, and six others have been injured.

Left: The Sierra Hotshots, from the Sierra National Forest, are responding on the front lines of the Ferguson Fire in Yosemite in this US Forest Service photo from California, released on social media on July 22, 2018. Courtesy USDA/US Forest Service, Sierrra Hotshots/Handout via REUTERS