The case for having just one kid

For the first five years of my daughter’s life, I was frequently told that I should consider having more children. I was still in my early 30s, after all, and had no fertility issues holding me back.

“Don’t you at least want to try for another?” people would ask, genuinely thrown.

But my personal favorite, a direct quote delivered by a family friend, without a hint of facetiousness, was this: “You make beautiful children. It’s your duty to make more.”

For me, the decision to raise an only child was almost instinctive, the way I knew I wanted to spend the rest of my life with my husband. I was never on the fence about having more kids; one just seemed like enough. Then, when we brought our daughter home from the hospital, I was more convinced than ever. Our family was complete.

With every year that passes — it’s been nine so far — I become more and more relieved that I didn’t marry a man who desired a bigger family. We always said, early on, that we’d be open to adopting a child down the line, but today is “down the line,” and the only-kid thing is better than ever. Do we arrange more playdates than the average family? Undoubtedly. But when we nestle down at night for books in our pajamas, it’s just the three of us. And three truly is a magic number. 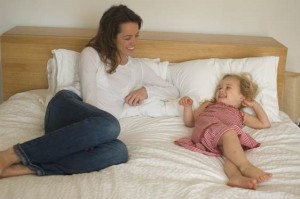 Wendy Thomas Russell and her daughter Maxine in April 2009. Photo by Suzanne Mapes

Of all my married friends and family members, most have at least two children — or aimed for that many at one time or another. And, even though U.S. families are shrinking, the Central Intelligence Agency puts the average number of children per family at 2.01.

So I understand the questions, and even the comments, and they don’t much bother me. Whether to have children, and how many, comes with a laundry list of pros and cons on both sides. (Laundry being an operative word.) But, to add some much-needed balance to our “more-than-one” culture, I wanted to share a list of my own.

Top 10 reasons to have only one child

1. It’s eco-friendly. You’re replacing two trash-accumulating, water-wasting, gas-burning individuals with one, which means your impact on the environment is drastically reduced. You get to be a mother without destroying Mother Earth.

2. Your whole family fits into one row of an airplane. And if you’re a person who gets stressed traveling with small children, this little gem is pure gold.

3. You can invite your childless friends over for dinner without scaring them off. Well, maybe you can’t. But you believe you can, and that’s the important thing.

4. You save money – and who doesn’t want to save money? All the money you don’t spend on medical bills, child care, diapers and birthday parties — to say nothing of the Disney store — can do a lot to relieve those worn-out pocketbooks. Plus, with all the cash you save, you can expose your kids to things they normally wouldn’t get to see or experience as children.

5. You avoid being cliché. The expectation is that you will have two children because that’s what people do. Let us embrace these small rebellions.

6. You don’t feel compelled to buy a minivan. No, there’s nothing wrong with buying a minivan. I’m just saying.

7. No one will quibble over your will. You know it’s true: Great families have been toppled over little more than crappy coin collections.

8. You have time and energy to pursue your own interests, socialize with friends, and devote to your marriage. If you want your child to have a happy, fulfilled life, you have to model that. And if all you do all day is try to keep your head above water, because society (or your co-parent) pressured you to expand your family even when your gut told you not to, you’re not modeling that.

9. You can hold hands with every single member of your family at once. And, come on, that’s just cute.

10. You get to focus on quality — not quantity. Having one means you can give your child undivided attention when she’s having a hard time and needs you to be there, really be there, for her. It means she will grow up knowing that she was all that was needed or wanted. “It wasn’t about having kids,” you can tell her. “It was about having you.” 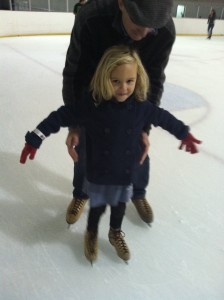 Maxine and her father Charles Russell in 2011. Photo by Wendy Thomas Russell

Listen, I’m not saying the only-child scenario is a perfect one. I’m the first to acknowledge that there are some disadvantages to capping our family tree so soon.

Once, at a hotel in San Diego, Maxine, then four, found a friend and began skipping along the concrete rim of a courtyard fountain. The rim was plenty wide and not much more than two feet off the ground, but my husband was hovering. Every 30 seconds or so, he reminded Maxine to “slow down” or “be careful.”

And it’s true: If we lose our daughter, we lose everything. It’s like we’ve put all our money into one stock without knowing whether it’s a high- or low-risk investment. Parents who have two or more children are diversified; the experts would surely agree that’s a smart way to live, right?

Smart, maybe. But it’s not foolproof.

There isn’t, and would never have been, a replacement for my Maxine. A second child could not lessen the grief of losing her. Perhaps the distraction of a second child would help me get up in the morning during those early months — but I don’t believe in bringing children into the world to act as a distraction in the case of some theoretical tragedy.

Having a child is a risk of the heart. Every day we parents get to experience the unrelenting joy of watching our children drink from the fountain of life while crossing our fingers that they don’t fall off the edge. We all do. Whether we have one child or five.

But what about when we die? That’s not a theoretical tragedy; that’s just a fact of life. I admit that in those early years, I sometimes experienced moments tinged with guilt when I thought that Maxine would never have a sibling of her own to lean on for support. My older sister, Jennifer, is — and has always been — my most trusted friend and confidante. I cannot imagine my life without her, just as I cannot imagine a world without her. And yet, I am depriving Maxine of a sibling all her own. Harder still is the fact that she was such a nurturing person — a sensitive, kind and thoughtful kid, already a great friend to so many other children. She has always been very close to her cousins, too — five girls and a boy — and her interactions with them leave me convinced she would have made a phenomenal sister. The kind I had. The kind who helped shape the person I am today.

At some point during Maxine’s toddlerhood, I began to brace myself for the day when she’d ask me why she was an only child. Would she feel deprived? Would she blame me for leaving her alone in the world? Would she plead or cry?

Then something remarkable happened.

She was around five years old at the time and was in her room dressing a baby doll, when I heard her yell, “Mommy!”

She was absorbed in getting the clothes on her little doll, so I doubt she noticed me stiffen. Here it is, I thought, the Sister Talk. What would I say exactly? How much did she want to know? How should I play this?

But before I could answer, she spoke again.

Then she looked up at me with her clear, sweet eyes and waited for me to figure out this conundrum of hers. If only, I thought.

And then it occurred to me: Being a sister or brother isn’t just a condition of biology, but a condition of friendship. It’s a frame of mind. It’s a desire and willingness to protect, empathize and support. You don’t need to share a room with someone to be a sister, or to share a mother, or to share a bloodline. You simply must share yourself, and allow others to share themselves with you.

“Yes,” I told Maxine. “Of course, you can be a sister without having a brother or sister. Of course you can.”