How champion marathoner Rita Jeptoo fuels the fire in her feet

Rita Jeptoo, a 33-year-old Kenyan runner won the Boston Marathon for the third time on Monday. The icing on the cake? She set a new course record for women, crossing the tape in 2 hours, 18 minutes and 57 seconds.

Going into the race, Jeptoo said she had heard that this year’s race was going to be different from 2013, when she had taken first place; the runner favored to win was instead Shalane Flanagan.

“Coming here, I had heard about her and knew that she was favorite to win, and I thought it was purely one of those mind games people play. But then when the race started it became a reality,” Jeptoo said.

Flanagan started the race with an aggressive push; Jeptoo knew then it was not going to be easy.

“People also were already chanting, ‘USA! USA!’ I felt so much pressure. On top of that, for some reason my body was not responding. I tried to push at the beginning, and I thought at first I would beat [Mare] Dibaba of Ethiopia, but Shalane — that was a real surprise for me.”

Jeptoo says at this point in the race, she had to remember her training in Kenya and the words of her coach, Claudio Berardelli.

“It is one thing to be told how to train and what to do in the pitch, how to pace yourself, how to get the final kick, but it’s another to be told that you are a winner and to be believed in,” says Jeptoo, who was recruited by Berardelli in 2001.

Jeptoo was born in 1981 in Karona Village in Moiben, in Uasin Gishu County of Kenya, the first-born in a peasant farming family. In 1996, at 15 years old, she ran her first race barefoot and won representing her school in the 1,500, 3,000 and 800 meter races. Her career breakthrough came at the 2004 Stockholm Marathon, where she won gold and set a personal best.

“I think to be a champion, you have to be strong both mentally and physically, and use whatever it is that is happening around you as the fuel to fire your ambition.”

It wasn’t until the late moments of the 2014 marathon that things started falling in place: Around mile 22, she ran faster, seeing her opportunity.

“I looked up and knew that I had already won the race in my head, and now looked back and I saw the small gap that had opened up. It was time to make my country proud now. I was not going to give up.” 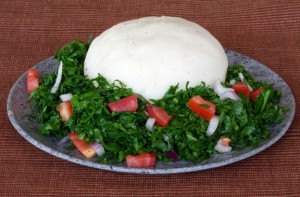 Ugali is a staple starch eaten in Kenya. It’s made from cornmeal and water and enjoyed typically with sukuma wiki, or collard greens. Photo by Flickr user Paresh Jai

Jeptoo went on not just to win the marathon, but to set a new course record. She says it takes a few basic things to win any race: exercise and training, of course. She trained in Kenya since January in mostly high altitude areas to help her acclimate. Her diet consists of the traditional Kenyan foods she loves: ugali (cornmeal mash), sukuma wiki (collard greens with onions) and meat.

But it also takes discipline, she says: “This is for anything you want to do in life, not just running.”

Rita lives in Kenya full time. When asked what’s next, she said she is going back home to think about it as she spends time with family and seek to invest the money in a worthy cause.

Willis Raburu is an anchor and reporter with Citizen TV in Kenya. He is a 2014 fellow with the International Center for Journalists.

Left: Rita Jeptoo of Kenya kisses her trophy during her victory ceremony after winning first place and setting a course record in the women's race of the 118th Boston Marathon. Photo by John Tlumacki/The Boston Globe via Getty Images