As California suffers through an historic drought, with penalties for wasting water going into effect this week, something unusual is going on: the state and the farmers seem to be agreeing on how to manage groundwater. Or how not to manage it.

It may be political, it may be practical, but it is somewhat of a first in a state that has fought over water since the days of the Gold Rush. This year the snowpack (that usually provides water well into the summer) is small, and the amount of water in the state’s rivers is down about a third. That means less water for farmers who depend on the state’s vast network of canals, dams and reservoirs to keep their crops growing. So many of them have turned to groundwater, the water under the surface of the land, that is pumped to the surface from the aquifers that exist below the ground. 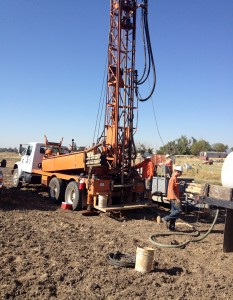 The odd thing is that while surface water is regulated and allocated and channeled and paid for, groundwater in California is hardly regulated at all. Other states have stringent rules. But in California, a farmer can drill a well (as a lot of them are doing right now) and pump to his heart’s content. Of course that depletes the aquifer, or takes water away from a neighbor, and in fact throughout the state groundwater levels are sinking. Wells must be drilled deeper and deeper, and some producing wells are coming up dry. The water that usually recharges the aquifer is absent this year, and that creates fear among scientists that there won’t be enough groundwater to meet the demand.

So you would think a solution is for the state to regulate groundwater — make some rules that would allow for equitable distribution of that water or have penalties for taking too much water or wasting it. Hardly anybody argues with that concept. But the big question is who should make the rules and enforce them. The state legislature is trying to come up with regulations. But there is widespread skepticism about regulating groundwater from Sacramento.

Farmers react viscerally to the concept of regulating their well water. They claim that it’s theirs, and they don’t’ want anyone telling them what crops they can grow and how much water they can use. They are pressuring the state to go easy; if regulations are to be made, better they should come from small irrigation districts that know the farmers and their needs.

And oddly enough state government seems to be listening. Without saying so, the administration of Gov. Jerry Brown is soft pedaling the idea of regulating groundwater. Felicia Marcus, the chair of the State Water Resources Control Board, says “the issue with groundwater is an interesting one. It has to do with a community resource that should be managed at a community level.” She admits there is an “ongoing dialogue … calling for some state action to help encourage locals to actually manage this resource in a fair and equitable way.” That’s a pretty diplomatic statement for a state that has built dams and canals you can see from outer space, and is planning on building more to move water from the north to the south, invoking all sorts of fights between urban and agricultural water users and environmentalists.

Of course Marcus and the state have some science on their side. “I don’t think there needs to be one way of doing it,” she says. “Because every community is different, every groundwater basin is different.”

Bottom line: the administration doesn’t want to antagonize the farmers by imposing statewide rules that agriculture will fight with all they’ve got. And with Jerry Brown hoping to get a large water transfer program, including huge tunnels, built, it’s not a good time to antagonize the agricultural community.

So farmers and municipalities continue to pump, while they debate how to “manage” (that’s the term they use, rather than regulate) a valuable but endangered resource.

A full report will air soon on PBS NewsHour.