From the age of 18, when she enrolled as the first black woman at the University of Georgia, Hunter-Gault has devoted herself to covering stories involving civil rights and inequality.

After working at a local television station in Washington and as a reporter at The New York Times, Hunter-Gault joined the NewsHour as a correspondent in 1978, then known as The MacNeil/Lehrer Report. She covered national and international stories at the NewsHour, winning two Emmys and a Peabody Award in the process. 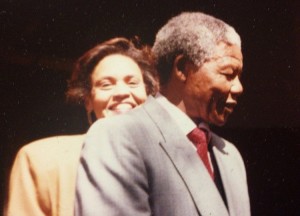 In this 1990 file photo, Hunter-Gault is seen with Mandela shortly after he was released from prison.

Hunter-Gault left the NewsHour in 1997 to become NPR’s chief correspondent in Africa. Hunter-Gault continued reporting from Africa for two decades for both NPR and CNN, for whom she was bureau chief in Johannesburg. She has also written several books about her life and about the changing economic and social landscape of Africa. Today she continues to live in South Africa, where she and her husband produce wine under the label Passages.

When Nelson Mandela was released from prison in 1990, Hunter-Gault was one of the first journalists to interview the famous anti-apartheid activist. Over the years leading up to his death, she conducted more interviews with him than almost any other reporter. You can watch her remembrance of the legendary statesman, which aired on the NewsHour in 2013 here.

Hunter-Gault’s award will be presented Feb. 4, 2015, at the 71st Annual Congressional Dinner in Washington, D.C.

Left: Charlayne Hunter-Gault in her office at the MacNeil/Lehrer Report on Sept. 6, 1983. Hunter-Gault is the recipient of the Washington Press Club Foundation’s 2015 Lifetime Achievement Award. Photo by Yvonne Hemsey/Getty Images