The dismissed juror — known as juror No. 11 — is a former Bureau of Land Management employee who allegedly told other jurors “I am very biased” during his statements in deliberations. Another juror, identified as juror No. 4, had questioned juror No. 11’s impartiality in a note to the judge Tuesday. Although Brown initially said the juror in question could still serve, she changed her decision Wednesday morning after the prosecution and all seven defense teams reached an agreement on the matter.

Juror No. 18, a paralegal from central Oregon, will take the dismissed juror’s place.

After making her decision, Brown called the 12 jurors into the courtroom, telling them the only way to deal with the question of bias was to dismiss the juror. She told the jury they need to completely restart the deliberative process.

“You’re going to have to set aside the conclusions you have and start over, just like when the case was handed to you,” Brown told the jurors.

“I’m racked with self-doubt (that this juror may have been on the defense’s side), but when it comes down to it, you have to be confident in your case, in your cause and in the presentation that you’ve been able to make and in justice,” Mumford said. Earlier in the day, Mumford asked Brown to dismiss the juror or declare a mistrial. 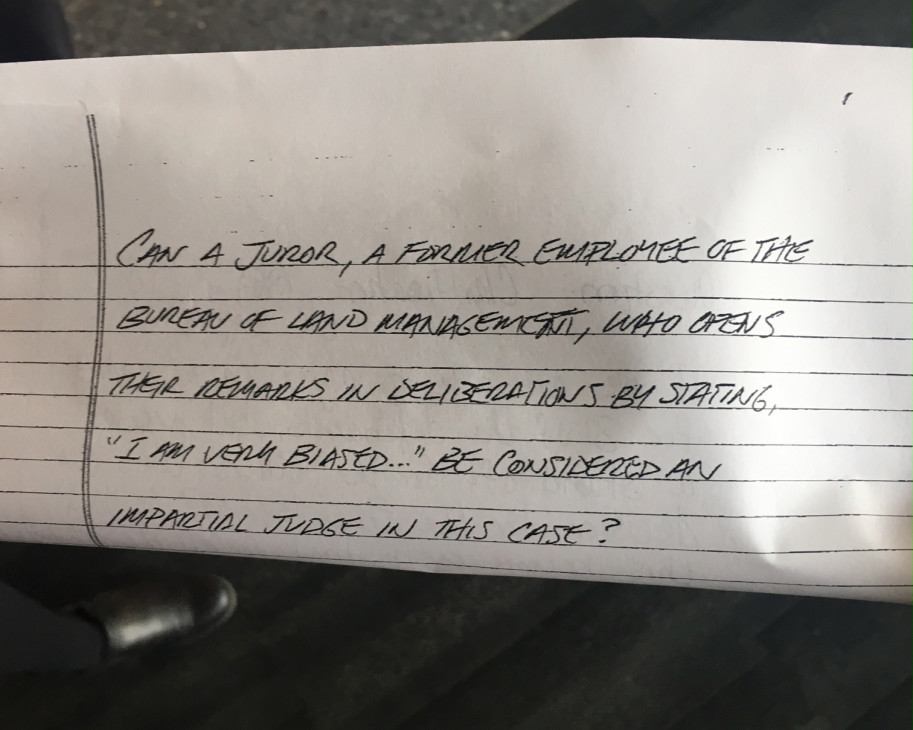 In a note to U.S. District Judge Anna Brown, the jury raised questions about the impartiality of one of its members in the Oregon standoff case. Brown has sent a note back to the jury asking them for clarification. Photo by Amelia Templeton/OPB

Dismissing a deliberating juror for cause — rather than unforeseen personal matters — is unusual. Many of the attorneys involved in the case said they had never experienced a similar situation before, despite combined decades of experience.

“This is only the second time I’ve ever seen it. Highly unusual,” Mumford said.

Kevin Sali, a Portland-based criminal defense attorney who is not involved in the case, said Tuesday’s note about juror No. 11’s alleged bias seemed “like a bombshell.”

Sali said it puts into conflict two core principles of a jury trial: One, he said, is defendants are entitled to an unbiased jury. That’s what voir dire — or jury selection process — is designed to do.

“The other core principle is that courts and the law are very, very reluctant to start inquiring into what jurors are saying behind closed doors in the jury room,” Sali said. “It’s sort of considered a sacred space.”

Left: Ammon Bundy is the leader of the occupation that took over the Malheur National Wildlife Refuge building on Saturday. Photo by Amanda Peacher/OPB