Are Hurricanes Linked to Climate Change? 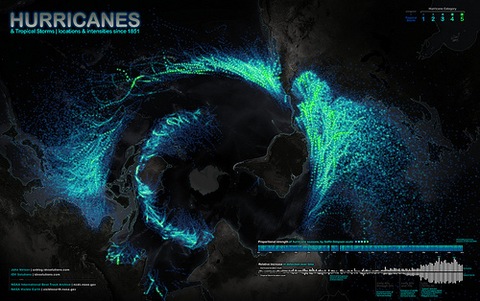 The image above uses NASA and NOAA data to show the location and intensity of every hurricane and tropical storm recorded since 1851. The dark blue patterns indicate tropical storms; bright green represents category five hurricanes. Note the South Pole is in the center, the Atlantic Ocean is to the right and the Pacific Ocean to the left.

Kerry Emanuel, professor of atmospheric science at the Massachusetts Institute of Technology, studies the connection between tropical storms and climate change. As the climate warms, hurricanes will intensify and damage from the storms will increase, according to a recent study in the journal Nature. We spoke with Emanuel at the Aspen Environment Forum.

Hurricanes form when thunderstorms cluster over warm waters, and they’re fueled by the warm seawater. When the sea surface temperatures are high enough, large quantities of ocean water evaporate and form storm clouds and rain, releasing heat. The heat energy, combined with the Earth’s rotation creates spiraling wind patterns, or cyclones. These cyclones grow as they pick up more moisture from the ocean. A hurricane is a system with sustained winds that reach 74 miles per hour.

As increasing greenhouse gases in the atmosphere warm the planet, sea surface temperatures rise, increasing ocean surface evaporation and creating more opportunities for hurricanes, Emanuel said. More moisture in the air also means that these hurricanes will carry with them more rainfall. And overall, rainfall is more damaging than high force winds, he said.

Emanuel expects the number of powerful storms and hurricanes to grow worldwide. In the Atlantic Ocean where scientists have been able to carefully study and record tropical storms since the 1940s, he thinks climate change is already evident. But he points out that the majority of hurricanes form in the Pacific and Indian oceans and, as the climate changes, some places may actually see a drop in hurricane activity while others will see a rise.