Speaking in Rome on Thursday, Secretary of State Hillary Clinton gave her perspective on what was happening in the White House Situation Room when the now-iconic photo was taken during the risky Sunday raid on Osama bin Laden’s compound.

Clinton said those were “38 of the most intense minutes” and that she has “no idea” what was happening at the second that White House photographer Pete Souza captured her covering her mouth. Actually, that might have just been stifling a seasonal allergic cough, she said. 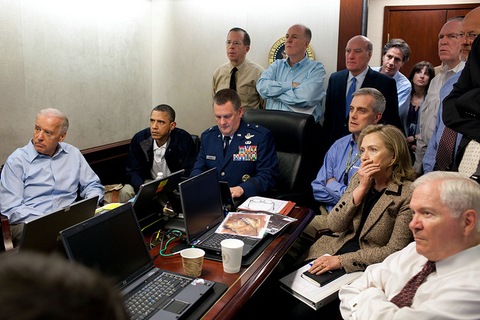 The photo, which The Washington Post describes as Souza’s “magnum opus,” has been viewed on Flickr nearly 2 million times, as of Thursday morning — not counting the number of times it has appeared in TV newscasts and newspapers.

The power of seeing President Obama’s intense gaze and his top staffers huddled in a cramped room “almost seems taken in a parallel world, one removed from our cubicles and trips to the dry cleaners,” Alexis Madrigal wrote in The Atlantic.

But, perhaps to soften the blow of this week’s events renewing memories of 9/11, comedians have been riffing on the image. David Letterman predicted “people 1,000 years from now will be taking a look at this picture” — before devoting one of his Top 10 lists to it. Of course, as is bound to happen with any ubiquitous photo, Photoshoppers quickly seized on its allure as a meme, adding the grumpy royal wedding flower girl, Keanu Reeves, a cat and a dinosaur, among others, to the image.