These college majors will get you a well-paying job

As high school seniors wait in anticipation for thick envelopes in the mailbox this spring, their thoughts may drift to what they’ll study when they enroll in their chosen schools. There’s renewed evidence this month that that’s not a decision to make lightly. Regardless of where your degree is from, what it’s in will affect your ability to get a job and how much you make.

There was a time, not so long ago, when the benefit of going to college at all, regardless of major, was in doubt. The college wage premium — how much more college grads earn than high school grads — flattened out in the early 2000s, after rising quickly during the 1970s and early ‘80s. What was the point of going to college if your job and earnings prospects weren’t much better when you graduated than before? But today, the outlook is improving, said Anthony Carnevale, director of the Georgetown Center on Education and the Workforce and lead author of CEW’s recent report, “Hard Times to Better Times.”

That’s not to say college grads are suddenly earning a lot more. Wages are stagnant, and in fact, of all educational groups, workers with bachelor’s and advanced degrees saw the largest decline in real wages between 2013 and 2014, according to the left-leaning Economic Policy Institute. But the college wage premium endures, as it has for years, said Carnevale, in part because high school grads have also seen a drop in earnings.

For any young adult trying to decide his or her path, Carnevale offers two pieces of advice: One, he said, “Get all the education you can get.”

Earning a graduate degree is still the strongest protection against the effects of a recession. Although the earnings of experienced graduate degree holders have declined, those workers still do much better than young and experienced workers with only a high school diploma.

Carnevale’s second piece of advice: “What you take determines what you make.” As you can see in the graphic below, how much better you do depends on the field of study. If all you cared about was money, Carnevale said, the best major is petroleum engineering. Workers who recently earned an engineering B.A. have a wage premium (compared to median earnings of all workers with a high school diploma, which is $32,000) of 78 percent. 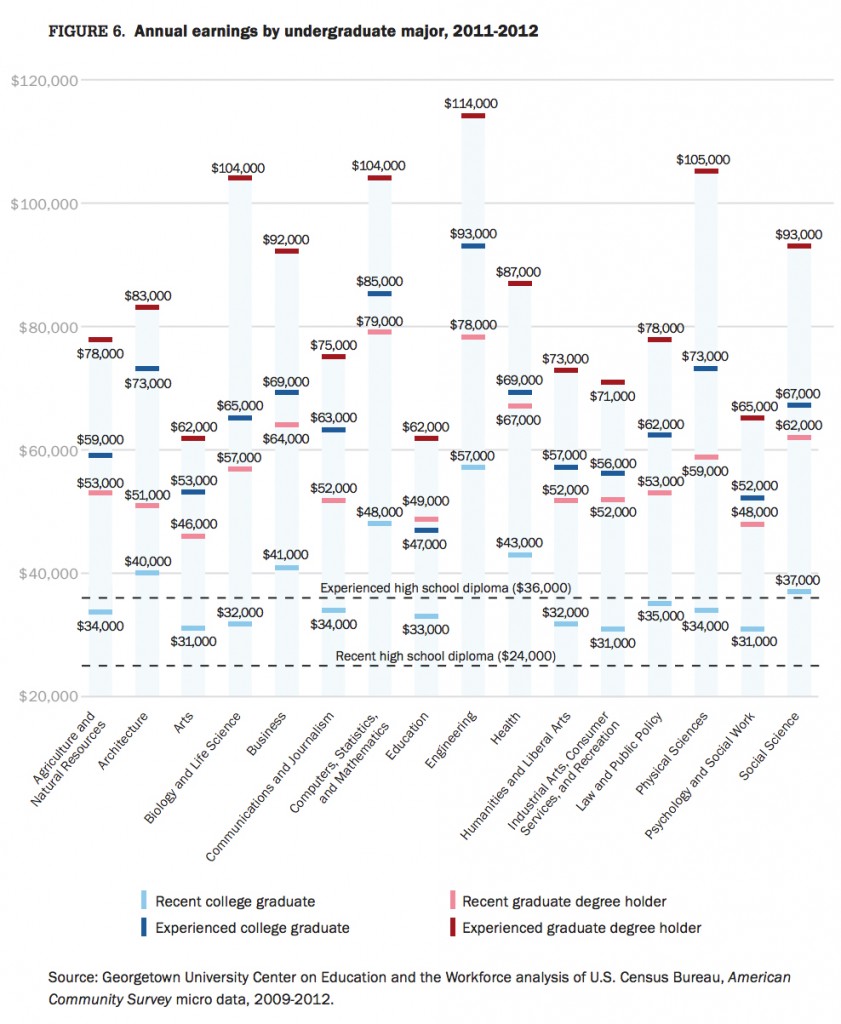 The premium for recent college grads who majored in the arts or psychology is far less. Those are fields, along with education, Carnevale said, where you’ve got to earn a master’s degree to earn more than experienced high school grads. The same can be said for the humanities.

Overall though, in today’s “knowledge economy,” college grads, event recent ones, have the advantage, especially when it comes to employment prospects. Recent college grads now have lower unemployment rates than experienced high school grads. That wasn’t the case 40 years ago, said Carnevale. In the 1970s, a unionized industrial worker would have had a much easier time finding a job than a humanities major. (By the way, employment in this study, based on American Community Survey data, refers to full-time employment.) 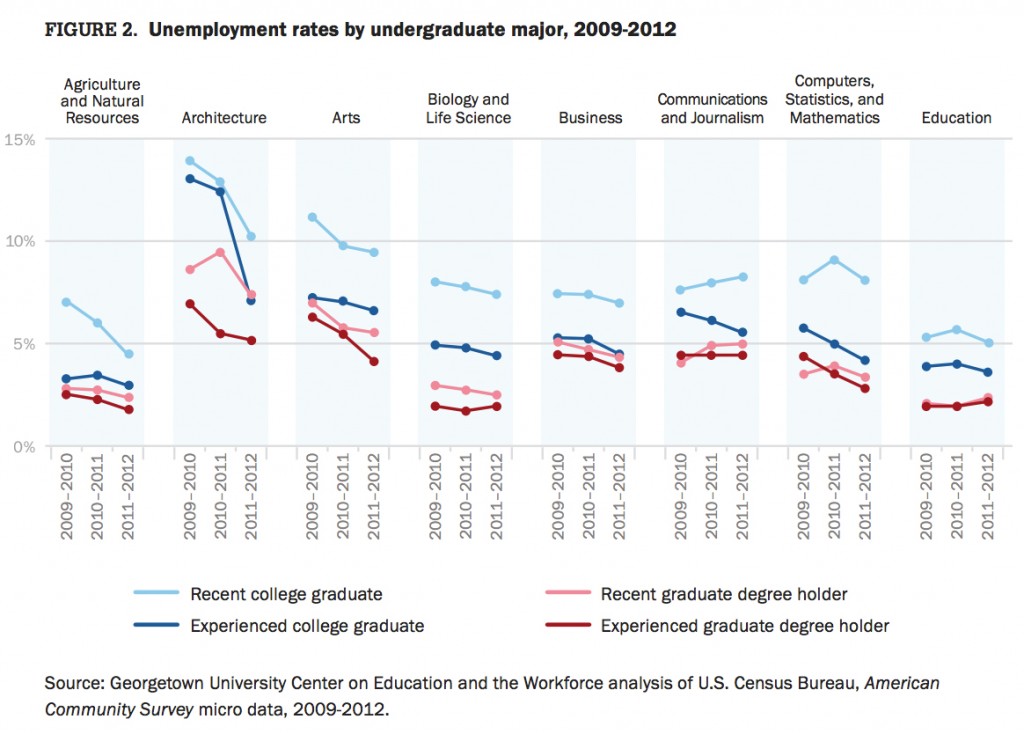 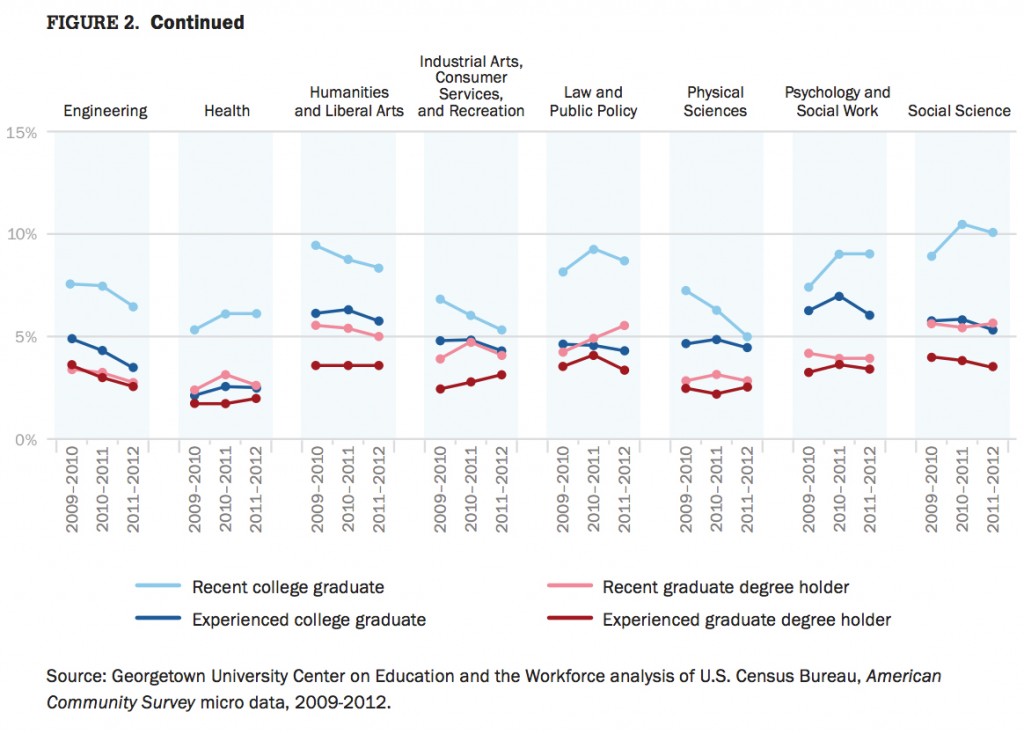 Two undergrad majors — architecture and social sciences — are leaving their graduates in a worse place than experienced high school grads in terms of finding a job.The misfortunes of both, Carenvale said, follow somewhat cyclical stories of recession and recovery.

The collapse of credit markets, and subsequently the building and construction sectors, hit architecture majors hard. The underperformance of social science majors was more surprising to Carnevale. But those majors are highly concentrated in government and nonprofits, which he said have suffered from public funds drying up during the recovery.

So how does your major stack up and was it a worthwhile choice? 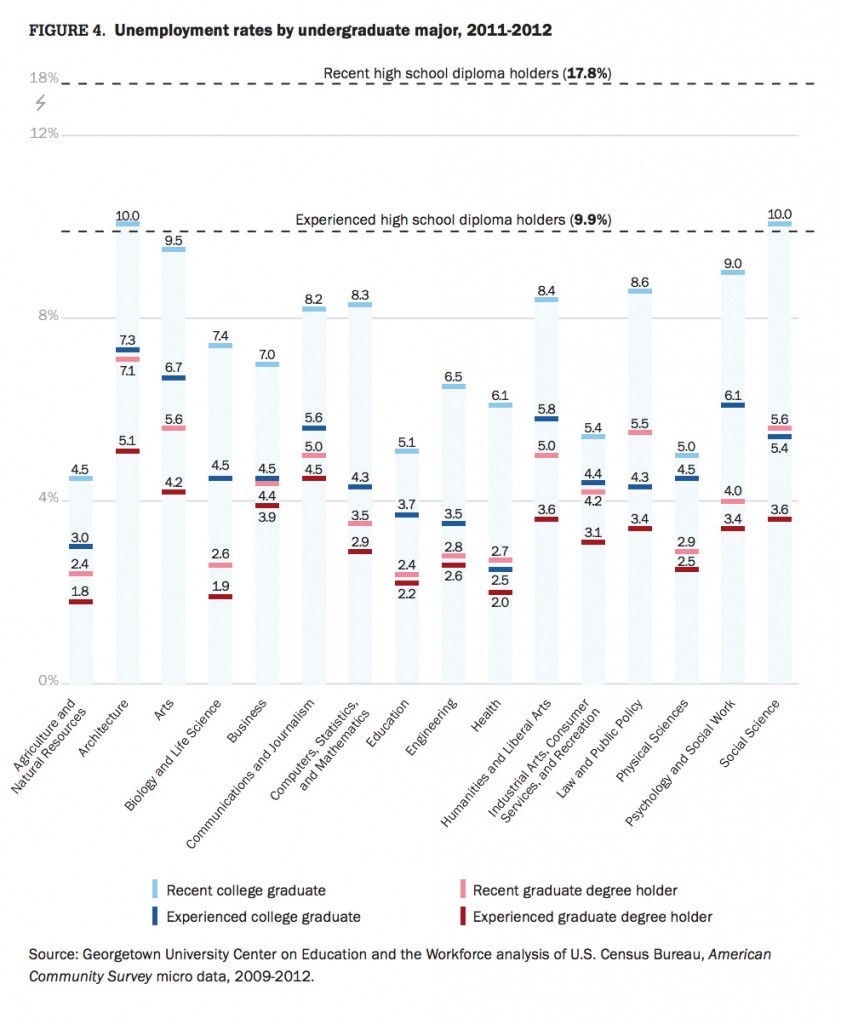 Many a college student has heard that learning coding is a faster ticket to greener pastures than, say, studying Kafka. But at 8.3 percent, the unemployment rate for recent computer science majors is surprisingly high — higher than journalism majors and almost as high as — heaven forbid — liberal arts majors!

Computer science, Carnevale said, has become the major du jour. Because it’s so in vogue, though, its tent has been expanded to include some roles, like customer service, that rely on computers but don’t require the hard technical skills we associate with the major, like programming. It’s those peripheral jobs within the industry that are a drag on the major’s employment figures.

Carnevale’s biggest take-away isn’t about which major is best, although he does think schools should be forced to make transparent the earnings of different majors. It’s that slowly improving conditions for college grads say a lot about the nature of our economic woes: “It’s cyclical, stupid,” said Carnevale. “Here we are, right on schedule.”

He projects that we’re heading for a full employment recovery for recent college graduates by 2017. In his opinion, that would be an unemployment rate somewhere below 4 percent, as opposed to the current 7.5 percent for recent grads ages 22 to 26 (it’s currently 2.8 percent for all college graduates). The college wage premium will strengthen, too, as the labor market tightens, Carnevale said. But again, that will depend on one’s major. The premium is likely to rise for STEM majors. For liberal arts majors? Don’t get your hopes up.

Left: On the whole, economic conditions are looking up for college graduates. But a lot depends on what you study and the level of degree you obtain. Photo by Digital Vision via Getty Images.