UPDATED 9:59 p.m. EST | The Associated Press reports that two people and a police officer with the University of Colorado in Colorado Springs were killed after a gunman entered a Planned Parenthood clinic in Colorado Springs, Colorado, Friday afternoon.

The Denver Post reports that University of Colorado, Colorado Springs confirmed that officer Garrett Swasey was killed in the line of duty. He was 44.

UPDATED 8:35 p.m. EST | The Colorado Fraternal Order of Police reported on Twitter than one of the officers involved in the shooting incident has died.

The suspect’s name has not been released. A motive is not known.

Buckley said it is still unknown how many people are inside the building; the officers are actively clearing the building now.

Buckley said the streets around the scene will remain closed while police clear the area.

You can follow the CSPD public information office for more details, @CSPDPIO.

UPDATED 6:14 p.m. EST | Colorado Springs Police spokeswoman Lt. Catherine Buckley said the situation at Planned Parenthood is still not stable and that officers are in contact with the suspect, who has fired upon the officer inside the Planned Parenthood building. Police are evacuating people from the building to a nearby Veterans Administration clinic.

Buckley said that the situation will likely take several hours, because once the shooter is apprehended, officers must stabilize the scene for several “items” she said the shooter brought with him. “He brought items to the building with him. We have to make sure they are not some type of device,” she said. She did not elaborate on what those items were, but federal agencies like the FBI and ATF are on the scene, along with the El Paso County Sheriff’s Department, Colorado Springs PD, Colorado Springs University police.

Buckley also said there was a possibility of a fifth officer injured. It is not clear how many people are still in the building, or how many are injured. Police are in contact with Planned Parenthood personnel to confirm the location of everyone in the building.

There will be another press conference at 7 p.m. EST.

UPDATED 4:54 p.m. EST | Colorado Springs Police Department have been rescuing people from the clinic and a nearby strip mall, Reuters reports. Police have not released the name of the suspect.

UPDATED 4:36 p.m. EST | Colorado Springs Police spokeswoman Lt. Catherine Buckley said a Bearcat has been used to retrieve an injured officer. She also confirmed that there were multiple shots fired, and that police are encountering gunshot fire inside the Planned Parenthood building.

The Associated Press has reported that four officers were injured, and civilians have also been injured in the shooting.

UPDATED 4:19 p.m. EST | According to the Associated Press, at least three police officers were injured in a shooting Friday near the Colorado Springs branch of Planned Parenthood. Colorado Springs Police spokeswoman Lt. Catherine Buckley says the situation is still active. CSPD reporting that they are still encountering gunfire.

Commander Kirk Wilson of Colorado Springs Police Department told a local television station, that two of the injured officers had been evacuated, but that they were still trying to reach the third. He did not offer details on how critical the officers’ injuries were.

It is no known how many civilian injuries there are.

The AP had reported earlier that the shooter had been contained, but is now reporting that the police are unsure about the location of the shooter.

The CSPB tweeted around noon, local time, Friday that it was responding an active shooter situation. Colorado Springs Police spokeswoman Lt. Catherine Buckley said they received the call from the Planned Parenthood office at 11:38 a.m.

CSPD PIO responding to call if active shooter in Centennial Bl. The area is NOT secure. Media do not stage in area!

The area near Centennial Boulevard and Fillmore Street in the Colorado city are on lockdown, the Colorado Springs Gazette reports, with ambulances and police vehicles stationed nearby. 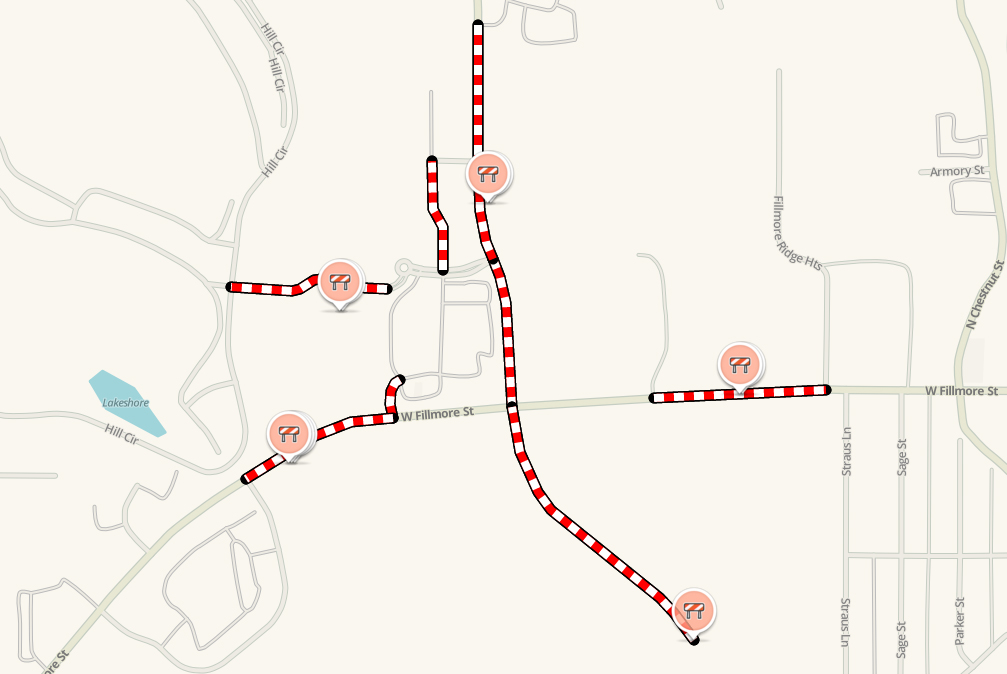 The Gazette is also reporting that one patient was wounded at an adjacent building.

The Gazette also spoke to a woman who was nearby at a haircut salon who said she heard roughly 10-20 gunshots in the span of less than five minutes.

We will update this story.

Left: A suspect is taken into custody outside a Planned Parenthood center in Colorado Springs, Colorado. Police arrested a gunman who stormed the clinic on Friday and opened fire in a burst of violence that left at least 11 people injured, including five officers, authorities said. Photo by Isaiah J./Reuters