For the past week in Colorado’s Jefferson County, more than a thousand students have walked out of their classes at several schools, protesting proposed changes to curriculum in U.S. History classes.

Evergreen Senior Eric Temple took part in the protests, which he says was organized via Facebook and other social media. “When I saw the fact they were considering reviewing the AP U.S. History curriculum and what was taught, it just hit me,” Temple says. “That was the best class I took. I wouldn’t allow anybody to alter that class.”

Temple and three other students met with District Superintendent Dan McMinimee and staff members. Temple says the meeting went well, with the superintendent pledging to be more transparent about what is before the school board. McMinimee said he respects students’ rights to express their opinions. “I do, however, prefer that our students stay in class,” he said in a statement. He also reiterated that no decisions have been made regarding curriculum changes.

The protests are aimed at new JeffCo School Board member Julie Williams’ proposal, which states, in part: “Materials should promote citizenship, patriotism, essentials and benefits of the free enterprise system, respect for authority and respect for individual rights. Materials should not encourage or condone civil disorder, social strife or disregard of the law. Instructional materials should present positive aspects of the United States and its heritage.” 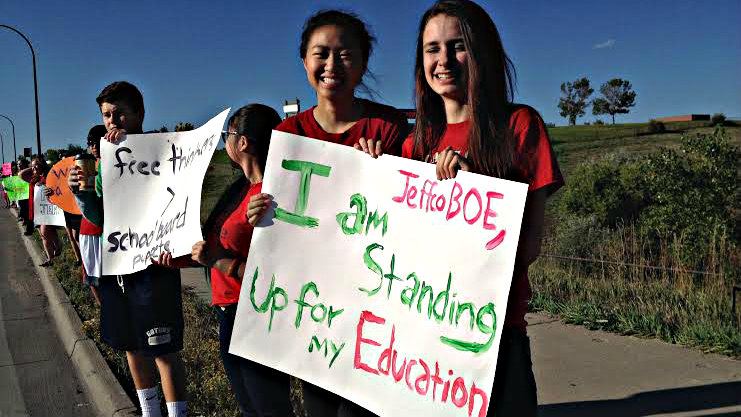 Williams could not be reached for comment, but she said in a statement that new curriculum for the Advanced Placement U.S. history course is revisionist and portrays the nation’s history in a negative context. “I was truly surprised by the reaction of so many people regarding the AP U.S. History curriculum,” Williams said. “I must not have explained myself clearly. I thought everyone, or at least everyone involved in education, understood the huge debate and controversy surrounding the new [curriculum] … Balance and respect for traditional scholarship is NOT censorship.”

The American Civil Liberties Union of Colorado has offered its support to the students. “It’s ironic that an attempt to downplay examples of social change being accomplished through civil disobedience has spurred a community-wide crash course in just how important it is to be able to speak out and question authority in a just and democratic society,” ACLU of Colorado Executive Director Nathan Woodliff-Stanley said in a statement.

The protests began one week ago when dozens of teachers at Standley Lake High School in Westminster, a Denver suburb, and Conifer High in Conifer, some 40 miles southwest, called in sick Friday, prompting both schools to close for the day. Teachers are riled by two issues: one is an ongoing disagreement over pay and the intentions of the new conservative board members. The other is a board proposal to set up a curriculum committee to review what materials teachers use in the classroom.

Williams has said she’s not trying to eliminate the facts of U.S. history, but shares the concerns conservatives nationally have outlined — that AP History casts some parts of our nation’s past in a negative light, such as the bombing of Hiroshima and slavery. 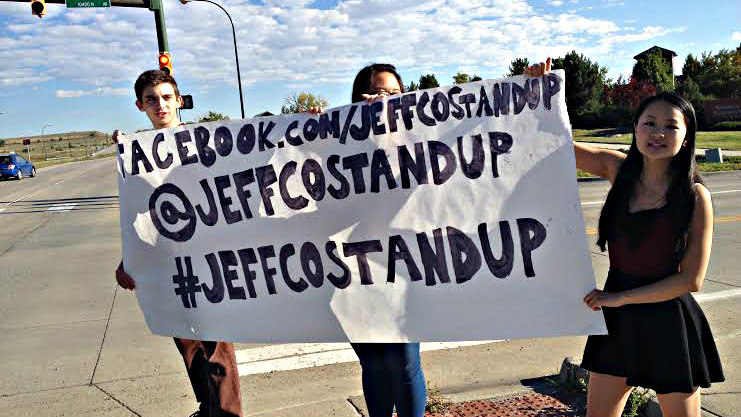 But students at Standley say school should be about learning to be free thinkers, how to express themselves and critically analyze what’s before them. “It’s not OK to censor my education,” said senior Meg Henderson.

Students also chanted “my school, my voice.” Senior Jocelyn Wallen was particularly irked by the resolution’s reference to the fact that materials should not encourage civil disorder.”If there’s no civil disobedience, no matter how big or small, nothing ever changes,” she says. “And if nothing ever changes, then nothing can ever get better.”

Nationwide, some conservative groups have complained the new AP History curriculum has an anti-American bias. Standley Lake High teacher Benjamin Thompson disagrees. He believes the content is the same, but says the standards are more rigorous and require much more critical thinking. How students are tested on the course has changed, which has affected how students are taught.

Take Franklin Roosevelt’s New Deal, for example. Under the old method, Thompson says he’d have to teach all the different programs — voluminous amounts of material. In the new way of teaching history, a teacher would focus more deeply on just four programs in the New Deal.

“It allows teachers to slow down and it’s not as driven by this giant test that we’re preparing them for,” Thompson says. In this new way of teaching history, there’s more time to look at different interpretations of events. And that may be what is making some conservatives uncomfortable.

So, what exactly is Williams proposing, and where did it come from? Here are some key points about this ongoing issue:

What’s in the proposal?
Williams’ proposal, discussed at a board meeting last week, would set up a committee to review curriculum, initially for Advanced Placement U.S. History classes and elementary health. The controversial piece of the proposal appears in Williams’ first draft:

However, a subsequent draft from fellow school board member John Newkirk removed the most controversial sections of the proposal. That draft was not formally introduced, but Newkirk says Williams accepted those changes. CPR News has not been able to confirm that with Williams. The resolution was tabled at the end of last week’s meeting.

Why is there so much talk now about AP History?
The controversy stems from the recent overhaul of the AP test. Students who take AP classes can earn college credit. The exam is administered by the New Jersey-based College Board. For years, the College Board has been working to de-emphasize rote memorization of facts in AP history and instead develop historical thinking and critical analysis skills. One historian calls it “teaching historical thinking instead of historical trivia.” The idea is to teach students how to read sources, how to use the skills of a historian, and how to create their own historical arguments. Many Colorado history teachers are already teaching in this style.

Conservative opponents say certain figures in American history are left out in the new framework and argue what is taught is too negative. They also say there is too much content about women, slavery, and Native Americans.

Proponents argue that while every founding father may not be named, it’s impossible for a teacher to discuss the Revolutionary War without naming Thomas Jefferson or George Washington. They argue the new framework is a broadening of American history.

The framework does not contradict the Colorado Academic Standards for social studies, adopted in 2009.

What do opponents say about this proposed change to teaching AP history?
Students see the proposed resolution as censorship. They say school should be about learning to be free thinkers, and how to critically analyze the material in front of them. They note many historic figures practiced civil disobedience and acts of rebellions. Teachers are upset there’s an assumption they’re leading kids astray.
The resolution’s sponsor Williams said at last week’s board meeting that her intentions are being misinterpreted. She says she’s not trying to eliminate the facts of U.S. history but shares the concerns conservatives nationally have outlined – that A.P. History casts some parts of history in a negative light, such as the bombing of Hiroshima and places too much emphasis on slavery and women’s rights. Williams has said the district should be molding good citizens, not “rebels.”

How has Jefferson County’s school board changed?
Last November, three new board members were elected – Williams, Ken Witt, and John Newkirk. The three formed a new conservative majority on the five-member board, which immediately triggered anxiety among teachers and parents about the new direction the board might take. During the election campaign, the three new members talked about supporting school choice and opposing a ballot measure that would raise money for schools.

Since the election, the board has been at odds with the Jefferson County Education Association, the teacher’s union over a new pay scale that places a great focus on performance, more money for charter schools, and expanding funding for kindergarten students. Board members have stated they want to ensure community voices are “heard, valued, and respected.” But parents and teachers say they feel shut out.

What happens next?
The school board could take up the issue again at its meeting on Oct 2, but a district spokesperson said “at this point there is no plan to have this discussion on October 2.” The agenda will be set on Friday.

A version of this story originally appeared on Colorado Public Radio’s website.