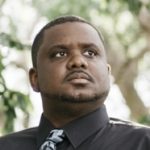 Column: Why does America have an appetite for the death of black men?

On Aug. 9, 2014, Darren Wilson killed Michael Brown. A young black boy was killed, made into a corpse for the threat he was perceived to be but never actually was. He was imagined to be a raging beast, and in America, the fear a black boy is imagined to be is in fact what he is. That terror led many in white America to blame Michael Brown for his own death. He was depicted as a criminal, a violent young teen — a super-predator.

In media accounts following Brown’s death, the justifications for Wilson’s use of lethal force ranged from Brown attacking Wilson (which resulted in a “broken eye-socket”) to a campaign aimed at painting Brown as a robbery suspect posthumously. Michael Brown was not the first and will certainly not be the last black male unjustly killed or murdered in the light of day in America. For all its promises of equality, democracy, and the rule of law, America has an appetite for the death of black men. The question, however, is why?

Historically, black males have been imagined as savage and animalistic in the minds of Europeans and American settlers. Despite the verifiable cruelty of American chattel slavery, it was a common belief that only the shackles surrounding the neck, wrists and feet of African men prevented them from slaughtering the white man, raping the white woman, and destroying the whole of white civilization.

The freedom of black men has always been imagined as a pretext to the inevitable unraveling of Western civilization.

The freedom of black men has always been imagined as a pretext to the inevitable unraveling of Western civilization. In 1839, for instance, the rebellion of the Mende against the slave holders upon the Amistad (a Spanish slave vessel) was depicted throughout American media as an uprising of black male cannibals with sharpened, pointy teeth, who not only killed but devoured their captors.

These seemingly unbelievable caricatures of black men in the 19th century, however, are not so far removed from how we perceive black males today. These ideas have profound effects on how the larger white society interacts with black men and boys. They are thought of as looming dangers in America and this anxiety and uneasiness about their presence—their physical being—makes it more likely that black men and boys will be the targets of lethal violence.

Phillip Atiba Goff, a black psychologist, has shown that white males often associate the black male face with that of the ape. The Negro-ape distinction has long been a racist delineation used to dehumanize blacks as lesser beings.

Black males are perceived as larger than and more threatening than other male groups. A study led by John Paul Wilson, a social psychologist at Montclair State University, found that “young black men are more physically threatening than young white men, believing that they must therefore be controlled using more aggressive measures.” As deplorable as this may seem, it is not inconsistent with previous studies that regard black males as more muscular, physically threatening, and dangerous — more formidable — than white or Asian men.

A cursory exploration of the numbers of black men killed by police in America over the last several years bears out this finding. Earlier this year, for instance, a Mother Jones analysis showed that among those aged 18 to 44, black men were about three times as likely as white men to be killed by police in 2015. This disproportionate violence directed towards black males offers an unsettling confirmation of the idea that black males, despite who they may actually be, are defined by the anxieties they produce in the minds of white America, no matter how illusory these fantasies may be.

READ MORE: Column: August is the month of our discontent

Michael Brown was a victim. Regardless of what one may believe he did do wrong, be it not complying with a police officer, or having an altercation at a gas station, or even in the worst case scenario sold weed, none of these infractions legitimize Brown’s death.

Black males are among the most dehumanized groups in America. No amount of violence towards black males triggers the larger society’s sympathy or outrage on their behalf. In fact the exact opposite is the case. As I argue in my book, “The Man-Not: Race, Class, Genre, and the Dilemmas of black Manhood,” “the American public, secure in its racist-sexual tropes of black male criminality and danger, consents to the police as executioners-murderers of black males, because this public is now convinced that the death of black men and boys is necessary for their protection and the security of society.”

Michael Brown was a young man made into a corpse. He will serve as a reminder to black men of the precariousness of life, of how near death lurks among them in America. He will remind black America of the cost of blackness within an American democracy that struggles, even in the 21st century, to recognize their humanity.

[Michael Brown] will remind black America of the cost of blackness within an American democracy that struggles, even in the 21st century, to recognize their humanity.

But most of all, Mr. Brown — along with Trayvon Martin, Tamir Rice and Emmett Till — will remind America that for all its supposed civility, its alleged exceptionalism, there is a barbarism that turns black bodies into rotting flesh and reminds black people that this is a white republic.

Admitting this paradoxical position of black males is often met with ridicule and censorship in academic settings, and death threats and intimidation outside of it. Examining the death and dying of black men and boys in the United States serves as a stark reminder that segregation, lynchings, and police executions still exact a deadly cost for venturing beyond the place white America has set for black men. Resisting this violence, or even the act of speaking against it, marks black men as militant and radical.

In May, Rod Dreher, a blogger at the American Conservative, resurfaced comments I made in 2012 concerning the movie Django. He was offended by my speech patterns and tone, as well as my insistence that black Americans had a right to self-defense and have valiantly exercised said right against white racism, police brutality, and vigilantism. In particular, Dreher was obsessed with one line in which I claimed that “in order to be equal, in order to be liberated, some white people might have to die” — something he took out of context.

His accusation ignited a slew of death threats, ranging from pictures of dead monkeys being sent to my email account to threats by white women who said I should be lynched because as a black man I was born a rapist. This is America. It makes no distinction between a black man with a Ph.D or a black man without it.

In this sense, we are all Michael Brown.

Editor’s note: Watch the PBS NewsHour livestream of the 2017 Hutchins Forum, “Race and Racism in the Age of Trump” on Thursday, Aug. 17 at 5 p.m.

Left: A protester, demanding justice for the death of Eric Garner, Michael Brown and Akai Gurley, holds a placard as he takes part in a march through Manhattan, New York December 7, 2014. REUTERS/Elizabeth Shafiroff

Tommy J. Curry is a professor of philosophy at Texas A&M University, specializing in Black Male Studies. He is the author of The Man-Not: Race, Class, Genre, and the Dilemmas of Black Manhood (Temple University Press 2017), and the recipient of the 2017 Alain Locke Public Philosophy Award for his commentaries on racism, and the death of and sexual violence against Black men and boys.