Column: How JFK created the cultural template for the modern presidency

While historians have portrayed him as everything from a nascent social justice warrior to a proto-Reaganite, his political record actually offers little insight into his legacy. A standard “Cold War liberal,” he endorsed the basic tenets of the New Deal at home and projected a stern, anti-Communist foreign policy. In fact, from an ideological standpoint, he differed little from countless other elected officials in the moderate wing of the Democratic Party or the liberal wing of the Republican Party.

Much greater understanding comes from adopting an altogether different strategy: approaching Kennedy as a cultural figure. From the beginning of his career, JFK’s appeal was always more about image than ideology, the emotions he channeled than the policies he advanced.

Generating an enthusiasm more akin to that of a popular entertainer than a candidate for national office, he was arguably America’s first “modern” president. Many subsequent presidents would follow the template he created, from Republicans Ronald Reagan and Donald Trump to Democrats Bill Clinton and Barack Obama.

JFK pioneered the modern notion of the president as celebrity. The scion of a wealthy family, he became a national figure as a young congressman for his good looks, high-society diversions and status as an “eligible bachelor.” 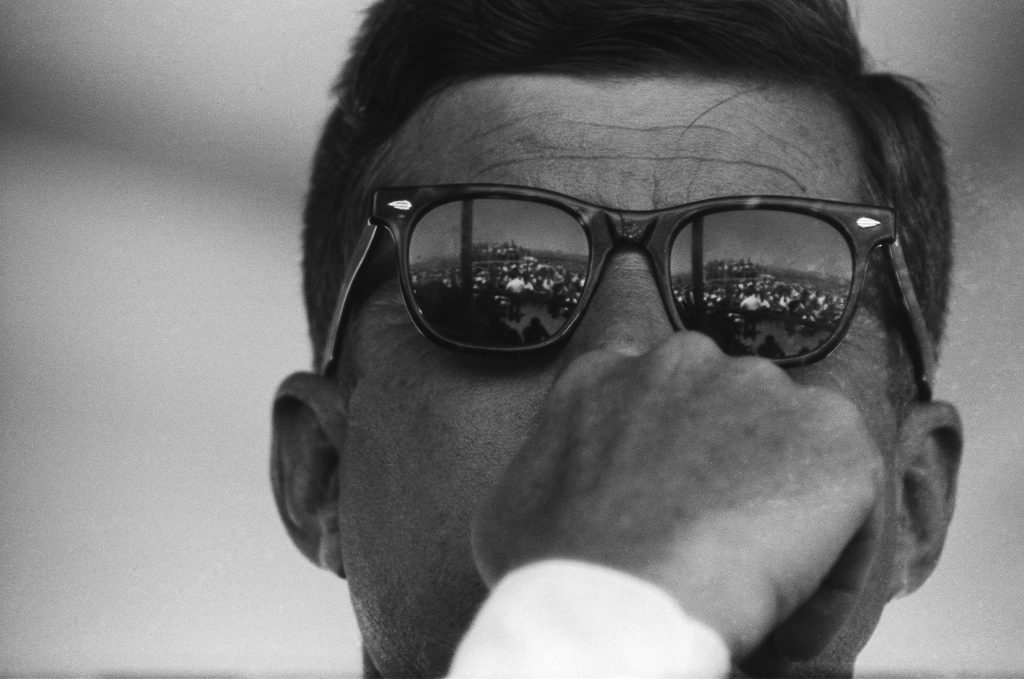 President John F. Kennedy reflects the crowd in his Ray Ban sunglasses during the groundbreaking ceremony for the Dan Luis Dam on August 18, 1962 on the Pacheco Pass between Los Banos and Gilroy, California . Photo by Michael Ochs Archives/Getty Images

He hobnobbed with Hollywood actors such as Frank Sinatra and Tony Curtis, hung out with models and befriended singers. He became a fixture in the big national magazines – Life, Look, Time, The Saturday Evening Post – which were more interested in his personal life than his political positions.

Later, Ronald Reagan, the movie actor turned politician, and Donald Trump, the tabloid fixture and star of “The Apprentice,” would translate their celebrity impulses into electoral success. Meanwhile, the saxophone-playing Bill Clinton and the smooth, “no drama” Obama – ever at ease on the talk show circuit – teased out variations of the celebrity role on the Democratic stage.

After Kennedy, it was the candidate with the most celebrity appeal who often triumphed in the presidential sweepstakes.

A master of the media

Kennedy also forged a new path with his skillful utilization of media technology. With his movie-star good looks, understated wit and graceful demeanor, he was a perfect fit for the new medium of television. 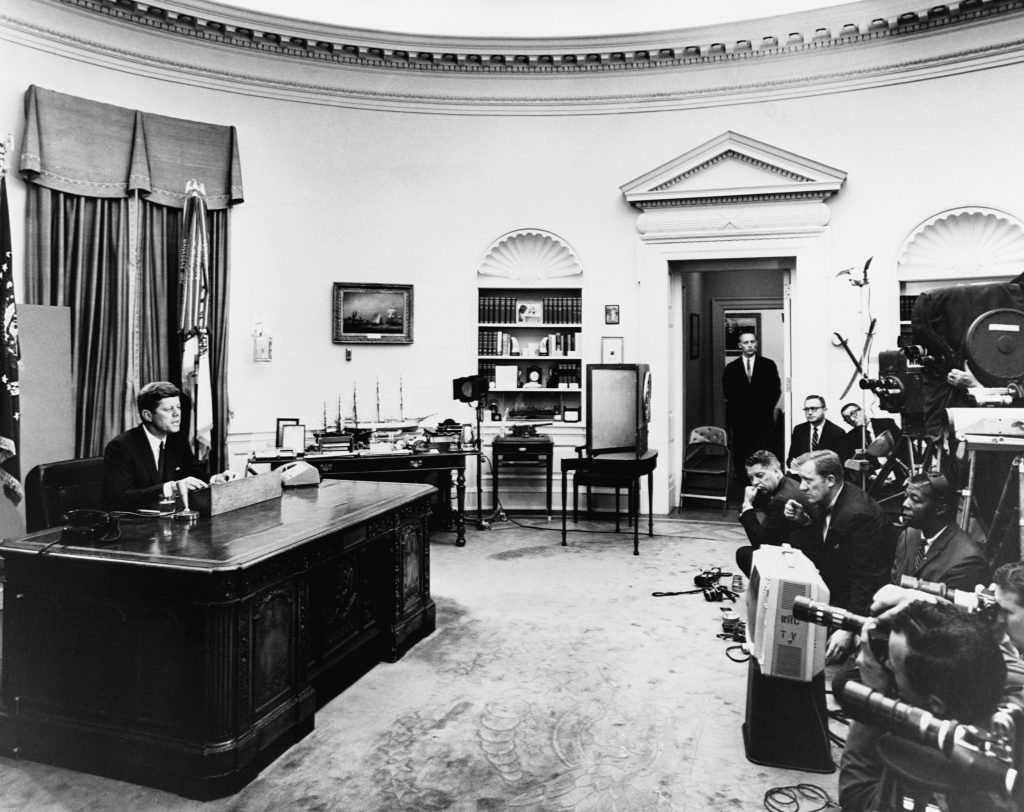 He was applauded for his televised speeches at the 1956 Democratic convention, and he later prevailed in the famous television debates of the 1960 presidential election. His televised presidential press conferences became media works of art as he deftly answered complex questions, handled reporters with aplomb and laced his responses with wit, quoting literary figures like the Frenchwoman Madame de Staël.

JFK pioneered the modern notion of the president as celebrity. The scion of a wealthy family, he became a national figure as a young congressman for his good looks, high-society diversions and status as an “eligible bachelor.”

Two decades later, Reagan proved equally adept with television, using his acting skills to convey an earnest patriotism, while the lip-biting Clinton projected the natural empathy and communication skills of a born politician. Obama’s eloquence before the cameras became legendary, while he also became an early adopter of social media to reach and organize his followers.

Trump, of course, emerged from a background in reality television and adroitly employed Twitter to circumvent a hostile media establishment, generate attention and reach his followers.

Finally, JFK reshaped public leadership by exuding a powerful, masculine ideal. As I explore in my book, “JFK and the Masculine Mystique: Sex and Power on the New Frontier,” he emerged in a postwar era colored by mounting concern over the degeneration of the American male. Some blamed the shifting labor market for turning men from independent, manual laborers into corpulent, desk-bound drones within sprawling bureaucracies. Others pointed to suburban abundance for transforming men into diaper-changing denizens of the easy chair and backyard barbecue. And many thought that the advancement of women in the workplace would emasculate their male coworkers. 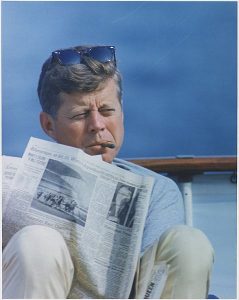 John F. Kennedy smokes a cigar and reads The New York Times on his boat off the coast of Hyannisport. Photo by U.S. National Archives and Records Administration

Enter Jack Kennedy, who promised a bracing revival of American manhood as youthful and vigorous, cool and sophisticated.

In his famous “New Frontier” speech, he announced that “young men are coming to power – men who are not bound by the traditions of the past – young men who can cast off the old slogans and delusions and suspicions.”

In a Sports Illustrated article titled “The Soft American,” he advocated a national physical fitness crusade. He endorsed a tough-minded realism to shape the counterinsurgency strategies that were deployed to combat Communism, and he embraced the buccaneering style of the CIA and the Green Berets. He championed the Mercury Seven astronauts as sturdy, courageous males who ventured out to conquer the new frontier of space.

JFK’s successors adopted many of these same masculine themes. Reagan positioned himself as a manly, tough-minded alternative to a weak, vacillating Jimmy Carter. Clinton presented himself as a pragmatic, assertive, virile young man whose hardscrabble road to success contrasted with the privileged, preppy George H.W. Bush. Obama impressed voters as a vigorous, athletic young man who scrimmaged with college basketball teams – a contrast to the cranky, geriatric John McCain and a stiff, pampered Mitt Romney. 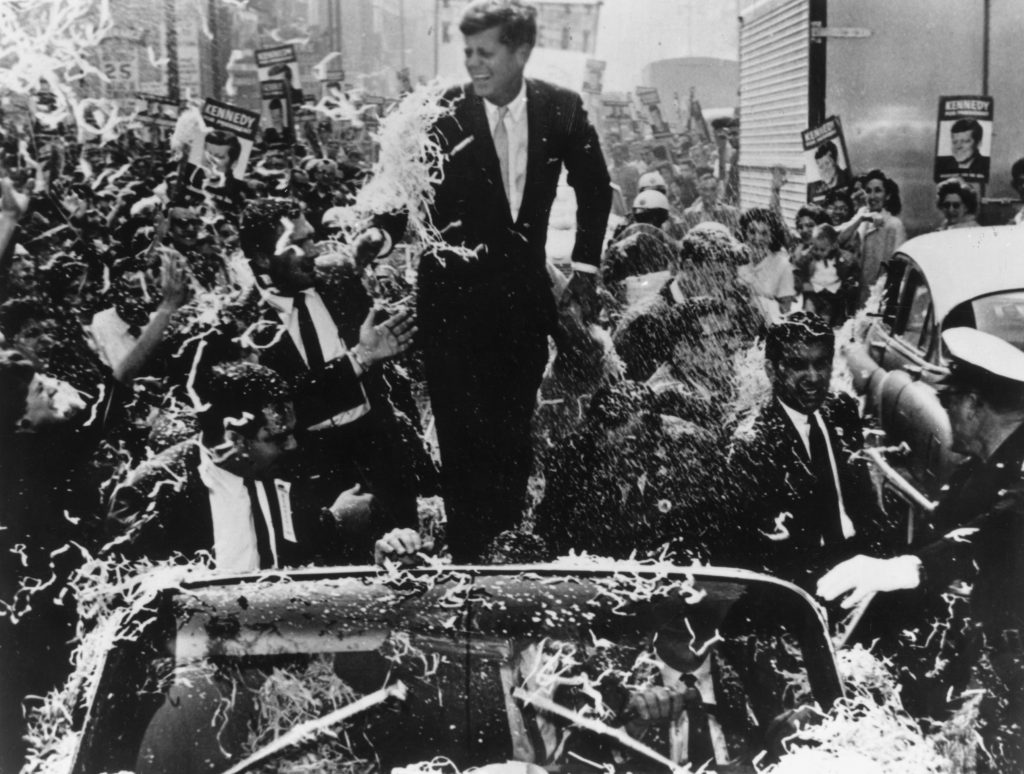 Senator John F Kennedy (1917 – 1963) is given a rousing ovation during his presidential campaign. Photo by Keystone/Getty Images

More recently, of course, Trump’s outlandish masculinity appealed to many traditionalists unsettled by a wave of gender confusion, women in combat, weeping millennial “snowflakes” and declining numbers of physically challenging manufacturing jobs in the country’s post-industrial economy. No matter how crudely, the theatrically male businessman promised a remedy.

So as we look back at John F. Kennedy a century after his birth, it seems ever clearer that he ascended the national stage as our first modern president. Removed from an American political tradition of grassroots electioneering, sober-minded experience and bourgeois morality, this youthful, charismatic leader reflected a new political atmosphere that favored celebrity appeal, media savvy and masculine vigor. He was the first American president whose place in the cultural imagination dwarfed his political positions and policies.

Just as style made the man with Kennedy, it also remade the American presidency. It continues to do so today.

Steven Watts is a professor of history at the University of Missouri-Columbia This article was originally published on The Conversation. Read the original article.