Column: The biggest paradox Rick Perry faces at the Department of Energy

A former governor of Texas – the state that produces more crude oil, natural gas, lignite coal, wind power and refined petroleum products than any other – would seem to be a natural choice for secretary of energy. Yet, assuming he is confirmed by the Senate, Rick Perry will face a paradox.

While the Department of Defense defends us, and the Department of Treasury manages federal finances and supervises banks, the Department of Energy does not provide America’s energy. Yes, it markets hydroelectric power from dams run by the Army Corps of Engineers, but U.S. energy production is overwhelmingly a job for the private sector.

The Energy Department is a hodgepodge of organizations, some of which existed decades before DOE was created in 1977. But it has two core missions: nuclear energy, weapons and cleanup, which account for 68 percent of the department’s fiscal year 2016 budget; and research and development (including basic science) to advance cleaner or more efficient ways to produce and use energy, which constitutes 28 percent of its budget. The incoming secretary will need to marshal these nuclear and scientific capabilities to meet key national security challenges, including a resurgent Russia and the threat of nuclear proliferation and terrorism.

The department of nuclear weapons and science

Physical science is at the heart of everything DOE does. Indeed, it could as accurately be called the Department of Physical Science (in contrast to the life sciences, which mostly reside at the National Institutes of Healthand the Centers for Disease Control and Prevention).

The Energy Department’s 17 national laboratories focus on physics, chemistry, and materials and other sciences. They operate at a high level: 115 scientists associated with the department or its predecessors have won Nobel prizes. These laboratories are precious national resources that enhance American welfare, prosperity and security. 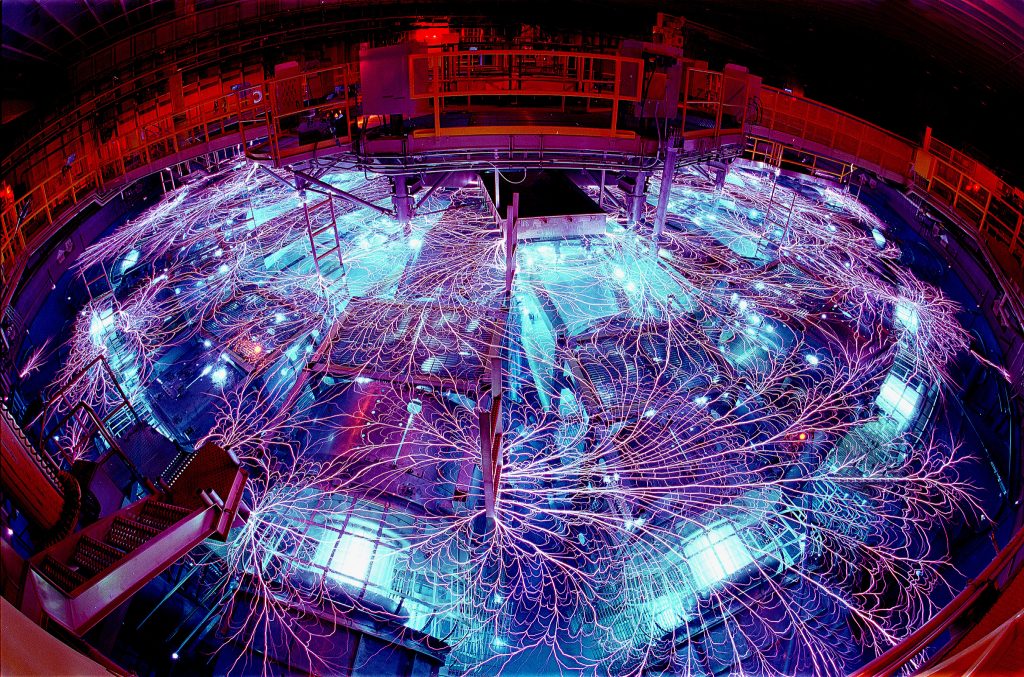 Many people in Washington might laugh at the thought, but the National Nuclear Security Administration, or NNSA, which accounts for almost half of the department’s US$30 billion budget, arguably rivals Apple in producing three different but related products at a world-class level. The U.S. nuclear weapons program is first-rate in terms of science, safety, security and reliability. The naval reactors program, which designs and maintains the systems that power the Navy’s submarines and aircraft carriers, ensures that our underwater fleet is unmatched in stealth and reliability, and therefore in military effectiveness. And the nuclear nonproliferation program, which works to prevent nuclear proliferation and terrorism and to inform arms control policy with technical expertise, has a wider international reach and a deeper roster of activities than any other such effort in the world.

Management challenges for the next secretary

DOE and its laboratories also have major management challenges. Many of the department’s facilities are one-of-a-kind and operate at the border between science and technology, in a high-security environment, often using potentially hazardous material or processes.

All of these factors introduce risk, which is inherent in employing novel technologies required to meet highly demanding technical requirements. One example is the National Ignition Facility at Lawrence Livermore National Laboratory, the world’s largest laser instrument, designed to create temperatures and pressures unseen outside of stars. All too often these ambitious goals and rigorous standards have resulted in cost overruns.

To be successful, the next energy secretary will need to focus relentlessly on three priorities. First, he or she will need to improve contract and project management. The Department’s Office of Environmental Management and the NNSA – which together spend more than half of the agency’s budget – have been on the U.S. Government Accountability Office’s high-risk list for years. Agencies and programs on this list are vulnerable to fraud, waste, abuse and mismanagement or in urgent need of transformation. 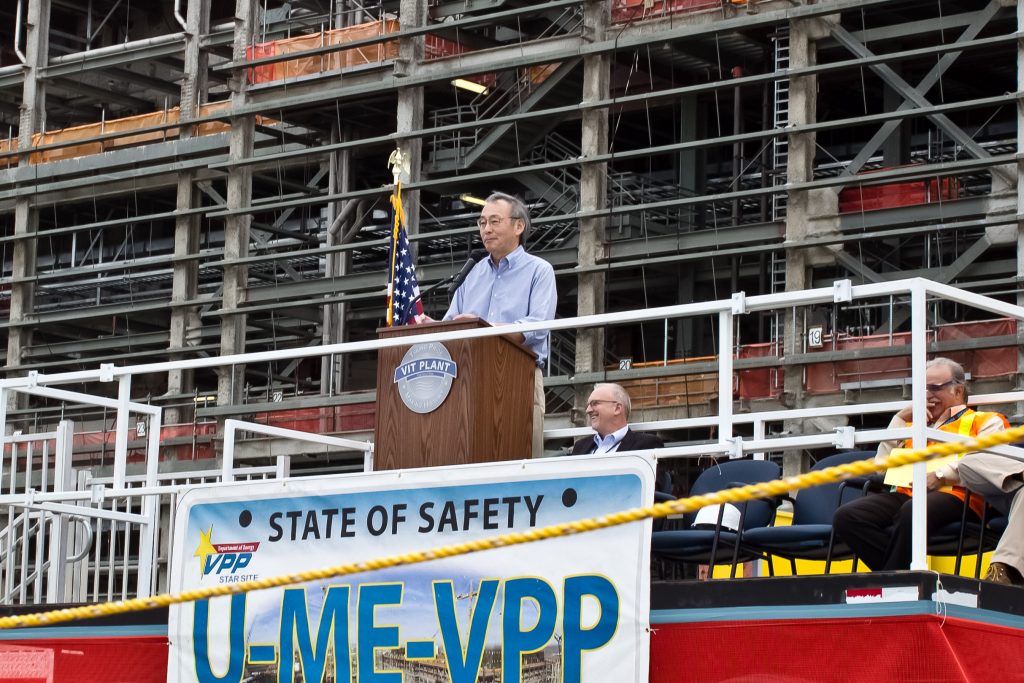 Energy Secretary Steven Chu visits the waste treatment plant construction site at the Hanford nuclear reservation in Washington in 2012. The 65-acre plant will seal 53 million gallons of radioactive and chemical wastes from more than 40 years of plutonium production for nuclear weapons into glass logs for permanent disposal. It is years behind schedule and billions of dollars over budget. Photo by Energy.Gov/via Wikimedia

Second, the next energy secretary will need to complete ongoing efforts to reverse the decay of our nuclear weapons complex. Much of the U.S. nuclear arsenal and the facilities necessary to make and maintain it have outlasted their expected lifetimes. Deferred maintenance can no longer be put off and obsolete facilities can no longer operate.

The Obama administration started this work, promising in 2010 to add $14 billion over 10 years to improve infrastructure. But a sustained commitment is needed. One big challenge will be to keep a new $6.5 billion uranium processing facility on track for completion by 2025.

Third, the next energy secretary will need to reinvigorate work to prevent nuclear proliferation and terrorism. NNSA operates the largest programs to detect, secure and dispose of dangerous nuclear material in the world. These programs are vital to U.S. security, and each of the last four presidents has put his stamp on them.

President George H. W. Bush began the process in 1991 by signing the Nunn-Lugar legislation, which provided money as the Soviet Union broke apart to secure and remove Soviet nuclear weapons and materials from the new countries of Belarus, Ukraine and Kazakhstan. President Clinton set the agenda and established programs to install physical protection and materials accounting, detect nuclear smuggling and consolidate the number of facilities that stocked weapons-usable nuclear materials.

Now those summits are over and cooperation with Russia is in tatters. DOE’s funding requests for nuclear security cooperation have declined every year since 2011, and the budget now is smaller than when President Obama took office. It is vitally important for the Trump administration to set ambitious new goals and provide enough resources for these programs.

Past secretaries of energy have come from a wide range of backgrounds, including the Navy, industry and academia. The most successful ones focused sharply on accomplishing two or three big goals and avoiding the myriad distractions that DOE’s sprawling bureaucracy constantly raises. They also trusted senior DOE staffers’ scientific and technical judgment, but asked hard questions.

The Trump campaign did not lay out detailed nuclear policy or energy research and development plans, which is understandable because those issues were not high priorities for the electorate. It will therefore fall to the next energy secretary to define them – and national security, not energy production, will be the highest priority.

William H. Tobey is a senior fellow at Harvard Kennedy School’s Belfer Center for Science and International Affairs. He was a deputy administrator of the National Nuclear Security Administration at the U.S. Department of Energy from 2005 to 2009. He is a member of the Secretary of State’s International Security Advisory Board and Chairman of the Board of the World Institute for Nuclear Security.

Left: The Department of Energy’s National Nuclear Security Administration supervises the removal of 68 kilograms of highly enriched uranium (enough for two nuclear weapons) from the Czech Republic in 2013. Photo by NNSA/via Flickr