Column: Robots won’t steal all our jobs, if employers and workers adapt

Editor’s Note: On tonight’s Making Sen$e Thursday NewsHour segment, Silicon Valley entrepreneur-turned-visionary Vivek Wadhwa drives me around Palo Alto in his almost-driverless car to pose the question: are we going to drive automation or will it drive us?

To MIT business school professor Paul Osterman, this raises the key economic issue of our era: meaningful jobs that pay a meaningful wage in the face of what he calls “the robot frenzy.” Meaningful work was the subject of his 2011 book, Good Jobs America: Making Work Better for Everyone. This year, he is even more specific in his book, Who Will Care For Us: Long Term Care and the Long Term Workforce.

So who will care for us as we age? Robots, as it has become fashionable to imagine in Japan? Robear, perhaps? Or human beings, paid enough to make it worth their while? That’s what Professor Osterman thinks, as you’re about to learn.

The unemployment rate may be descending towards its natural level. But that hasn’t stopped many economists and workers from worrying about the future of the job market, and the long-term impacts of automation. Work is gradually disappearing, the argument goes. Robots will steal our jobs.

Of course, history is littered with moments when people worried about the impact of technology on jobs and many of those concerns proved unfounded. The current climate is no different. But our obsession with robots is leading us to overlook challenges and opportunities of much greater practical importance than worries about automation.

The opportunity lies in an oft-ignored fact: even those occupations which are contracting due to technological change will continue to provide plenty of job openings over the next two decades. The challenge lies in improving the quality of these jobs going forward.

Debates on this issue frequently overlook a key distinction between net change and the flow of job openings. Consider blue collar production jobs — the classic example of an occupation that will dramatically shrink due to technical change. In in the year 2024, there will be 282,000 fewer such jobs than in 2014, according to projections by the Bureau of Labor Statistics. But does this mean that there will be no job openings in production, as some people argue? Absolutely not. Aging baby boomers will retire, creating replacement openings. Indeed, the same government projections point to 2.2 million production job openings.

This same pattern holds across the board. Overall projections of actual job openings are five times the predicted net growth in employment.

So, what does this mean? The demand for workers with new or broader skill sets is gradually rising, ensuring that the new production hire of tomorrow will need to be more capable than the person he or she will replace.

That said, my own research — based on a nationally representative survey of manufacturers — suggests that these evolving “skill demands” don’t require as much education as many people believe; in fact, most in-demand skills can be obtained at the community college level. For example, three-quarters of employers in the survey said they only required basic math for their frontline workers, a skill set that can be obtained without an advanced degree. (Just 14 percent of employers said they required their employees to have an understanding of probability and statistics, and only 7 percent required knowledge of calculus.)

The lesson is that investments in our human capital make sense — and they’re within reach for more people than is commonly assumed. This is a very different conclusion than the popular argument that work is ending. Instead of worrying about some future automated workforce, the nation’s economic policy agenda should focus on preparing people for the large number of replacement openings that will develop in the years to come. But that’s only part of the solution. Policymakers must also focus on job quality at the bottom of the labor market. 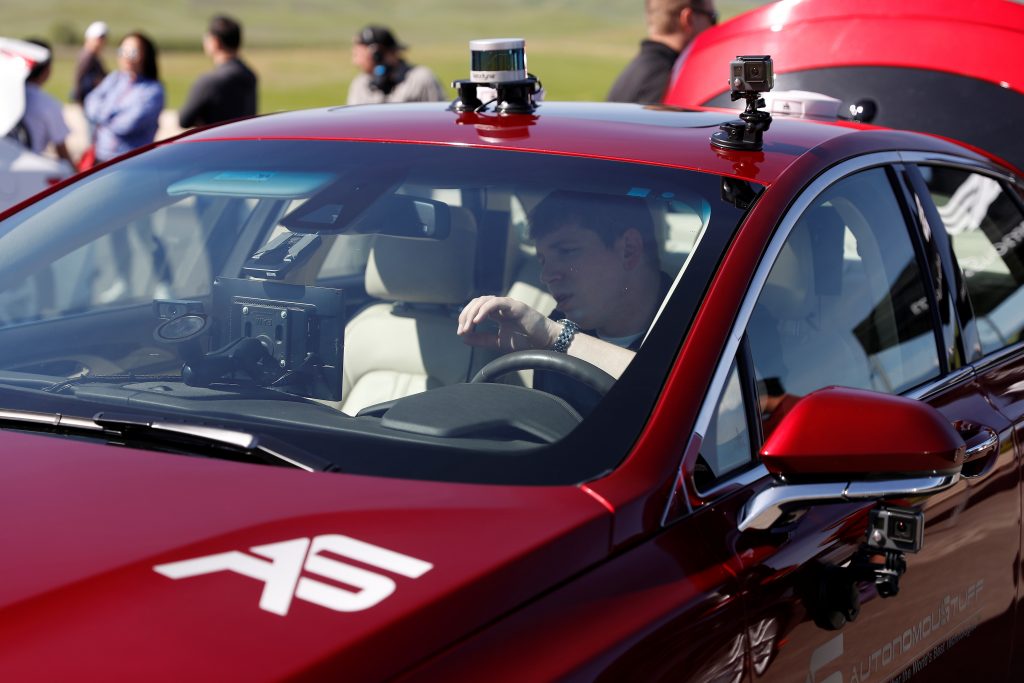 An engineer works on an AutonomouStuff Automated Research Development Vehicle during a self-racing cars event at Thunderhill Raceway in Willows, California, on April 1, 2017. Photo by REUTERS/Stephen Lam

Last year, 27 percent of employees in the United States earned a wage of $13.93 an hour or less. Full-time, year-round work at that hourly wage still puts those employees below 150 percent of the poverty level for a family of three with one child. The nation’s large low-wage job market is a problem, but viewed from another perspective it also represents enormous potential. Instead of anguishing over robots, why not focus on improving job quality for people who are currently employed, so they won’t eventually get replaced by machines.

But while improving job quality is a crucial and much-needed next step, it’s also a complicated task. We know of some proven and effective tools, such as raising the minimum wage, incentivizing decent overtime pay, and expanding unionization. But, while effective, implementing these approaches on a national level remains politically fraught.In particular, growing the unionized workforce – arguably the most effective means of ensuring better jobs – doesn’t seem likely, at least in the foreseeable future.

A more promising — and perhaps realistic — strategy is to convince employers that upgrading their workers’ job quality is in their own best interest. The potential policy menu for accomplishing this includes the government setting an example by insisting that its contractors provide good jobs; building job ladders so that entry work can lead to higher quality jobs; convincing Wall Street that high-road policies are profitable; and demonstrating the economic benefits of improved job quality.

Improving job quality is a crucial and much-needed next step, but it’s also a complicated task.

My favorite example of the latter approach is in health care. Specifically, in the role of home health care aides. The sector has over two million workers today and is slated to grow even further as the baby boomer generation ages and the demand for home health care rises. Yet these direct-care workers make on average $10 per hour. The sector’s workforce is almost entirely female, and most are minorities. A significant percentage of home health care aides are also immigrants. These jobs will always be with us; the robots are not an issue. The better question is, how can they be improved?

Today, these home health care aides receive minimal training and are often limited by regulations from performing a broad range of tasks. In some states they cannot even administer eye drops! The solution is to show that aides can do much more, if properly trained — a change that would have the added benefit of reducing health care costs.

For example, aides could also serve as health coaches who help clients with diabetes eat more carefully and get exercise. Health care aides could assist in transitioning patients from hospitals to their homes, thereby reducing the number of costly nursing home stays. They could also be incorporated into larger health care teams; putting home health care aides in better touch with doctors and nurses would reduce the number of unnecessary trips to the emergency room. There is good evidence that all of this is possible and if it were to happen then the payers—insurance companies and Medicaid—would save money and home health care aides could earn more.

Over the next two decades, we need to prepare people to enter the large number of jobs that will be available due to the retirement of baby boomers. This means investing in education and training for skills that are certainly attainable by the vast majority of people. And it means shrinking the scope of our large low-wage job market by convincing firms that it pays to invest in job quality improvement. By tackling these challenges, we’ll be able to focus on the economy of the future, and stop worrying as much about robots stealing our jobs.

Paul Osterman is the NTU Professor of Human Resources and Management at the M.I.T. Sloan School of Management and the Department of Urban Planning, M.I.T. He was formerly Deputy Dean for Faculty and MBA Teaching at the Sloan School. Osterman’s books include: Who Will Care For Us? Long Term Care and the Long Term Care Workforce (Russell Sage, 2016); Economy In Society (MIT Press, 2013); and Good Jobs America: Making Work Better For Everyone (Russell Sage, 2011).