Column: In search of the spot where two black teens were killed

Monday on the NewsHour, watch Duarte Geraldino’s report from Forsyth County on the history that inspired Patrick Phillips to write “Blood at the Root.”

As I walked the hills of Forsyth County, Georgia, my eyes fixated on the ground, I imagined the fright two teenagers would have felt being led to their death more than a century ago. I was there to get a deeper understanding of how one small corner of America is trying to heal nearly a century after banishing almost all of its African-American residents.

For context, understand that I’m a New York Afro-Latino. My guide through the Georgia woods was Patrick Phillips, a white author who grew up in Forsyth. We had met months earlier at the Bread Loaf Writers Conference in Vermont, where he told me he’d spent the past 10 years collecting remnants and documenting evidence of Forsyth’s original community of free African-Americans. Most of it, he explained, has been erased, burned, built over, or  divided up. Together we tried to find the spot where two African-American teenagers —  Ernest Knox, 16, and Oscar Daniel, 18 — were killed on Oct. 25, 1912.

The two were part of a group of African-Americans arrested for allegedly taking part in a sexual assault on an 18-year-old white woman named Mae Crow. One of them was so small that a special noose was designed for him lest he be decapitated and splash blood on any of the picnickers gathered to watch the pair die. Today even some of Crow’s descendants say the teens may have been innocent.

“The last thing [they] saw before black sacks were placed over their heads,” Phillips wrote, “was a hillside dotted with thousands of white faces—young and old, rich and poor, men, women, and children.”

Phillips recently published a highly praised book on the subject, “Blood at the Root: A Racial Cleansing in America.” Their deaths sparked a period of so-called “racial cleansing” in the county.

“The night riders won,” Phillips said. “It worked. They succeeded in their goal of driving out the entire black community.” 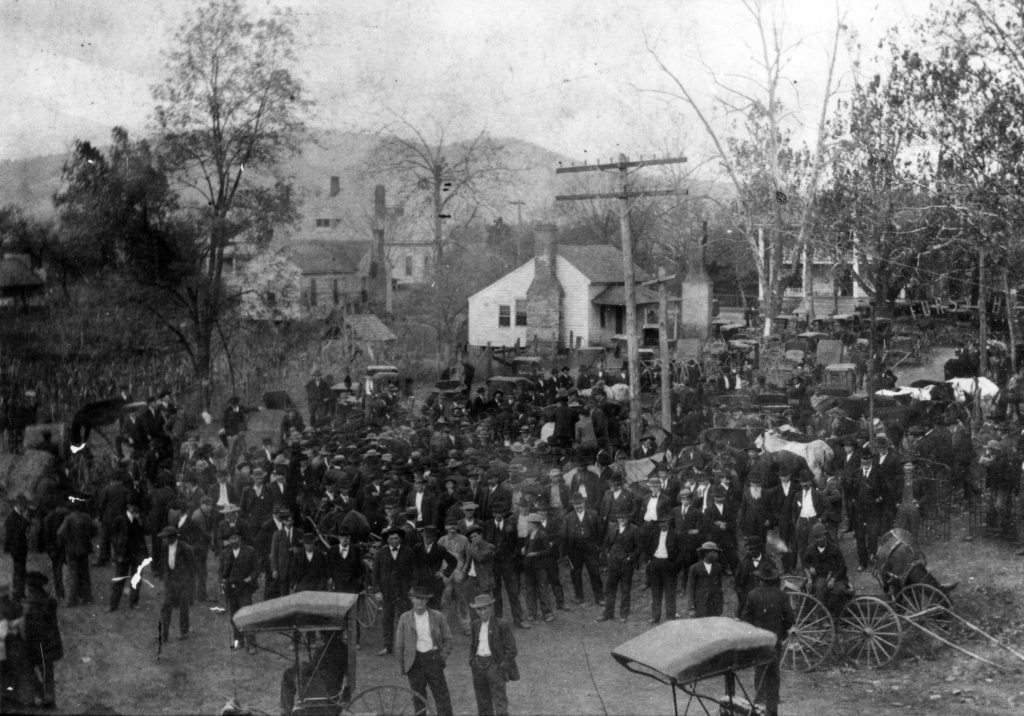 A crowd near the gallows where Knox and Daniel were hung, with Sawnee Mountain in the distance, Oct 25, 1912. Courtesy of Jimmy E. Anderson

Probable miscarriage of justice aside, for me the big questions were, how could thousands of people bring their families to witness the hangings of these teens? How could a community look the other way as their neighbors were pushed out? After meeting with Phillips and spending time in the Georgia hills, the answer was clear: The crowds didn’t see the boys as teens, they didn’t see black residents as neighbors.

The picnickers instead were convinced they saw a threat to their lives and the embodiment of a wave of misfortune befalling Forsyth at the time.

As Phillips and I crossed the terrain, he explained how, in 1912, this part of Georgia was experiencing extreme economic stress. White farmers were losing their lands to foreclosure. There was a growing perception of free blacks as a financial threat to whites. And in the midst of all that, several young politicians were trying to make names for themselves. Fears of a race war were common at the time, Phillips said as we drove by a home that was built on land where a black church had been burned decades earlier.

That fear survived through several generations. But in 1987, everyone, it seemed, broke their silence. Black leaders organized a march through the county. White supporters of the racial ban vocally challenged them, allowed themselves to be recorded using the N-word, photographed waving nooses in the air. Even Oprah Winfrey got involved, taking her show on the road to Forsyth. The world took note and so did many of the most influential members of the community, who were concerned that Forsyth’s reputation — that unspoken ban on black people — was actually a different kind of noose.

How could thousands of people bring their families to witness the hangings of these teens? How could a community look the other way as their neighbors were pushed out?

“It was a soul-searching moment for this community,” James McCoy, CEO and president of the Cumming-Forsyth Chamber of Commerce told me.  “Much of that was driven by the business community,” he said, which recognized that racism and violent xenophobia jeopardize economic growth.  Chamber members took steps to welcome large businesses explicitly bound by civil rights laws.

Walk through Forsyth today, and one can see how much has changed in the last 30 years.  In 1987, fewer than 40,000 people lived in Forsyth; today it is home to roughly 200,000.  Though still largely white, it has a vibrant and growing South Asian community, the number of Latinos is on the rise, and, according to the chamber of commerce, African-Americans account for more than 4 percent of the total population —  that’s thousands of people of color.  Census data shows that Forsyth is now one of the wealthiest counties in America, home to big businesses and many large homes. In 2016, Daniel Blackman, a Democrat, became the first African-American to run for state office. He wanted to represent Forsyth in the Georgia House of Representatives. He lost, yet the very act of running — of allowing himself to be such a visible African-American in a community known for lynching black men — is a sign of how far Forsyth has come.

We never did find the exact spot where those two teenage boys were hung. It has been 104 years; the physical and cultural landscapes are different now. So many trees and beautiful homes now cover up most of the locations suspected of being their death site. About the only thing easy to find was the sense that something really bad happened here, something from which America can learn.

Duarte Geraldino is a special correspondent for PBS NewsHour.
He is currently working on a book about people left behind in the USA after their loved-ones have been deported.
For much of 2016 he was traveling around the United States reporting on the race for the White House. He has extensively covered the Black Lives Matter movement, the banking crisis, and the impact of changing demographics on America’s culture & economy.
Most recently he was a correspondent for Al Jazeera America, where he traveled the country documenting how economics, business, technology and public policy change lives.
He has contributed reports to Bloomberg TV, the CBS Affiliate News Service and guest anchored the CBS Morning News. Duarte’s research interests include how finance, technology, and immigration issues impact American culture.