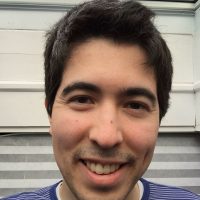 Column: The last time I raced against Michael Phelps

It’s August 1997 in Deptford Township, New Jersey. I’m swimming at the Eastern Zone Championships — the culmination of the summer swim season — along with the best young swimmers from Maine to Virginia. My father and I are about to grab a bite to eat between the morning preliminaries and the evening finals. I spot a 12-year-old swimmer, Michael, exit the elevator, his mother Debbie following behind him. The two of them join us for lunch in the hotel restaurant. Michael — as in Michael Phelps — orders clam chowder (he started ordering his favorite pre-competition meal at an early age), and I try to get something healthy like fruit, though perhaps it was a club sandwich.

To be honest, I remember the things Michael did at that meet much more than the things I did. I remember that he and his mother were kind and chatty, that I was thankful for the company. I wasn’t sitting with the most decorated Olympian ever; he hadn’t broken any world records yet. I was sitting with a Maryland teammate, a fellow competitor, and, simply, a good kid.

I wasn’t sitting with the most decorated Olympian ever. I was sitting with a teammate, a fellow competitor and, simply, a good kid.

One day during preliminaries, Michael summoned all the 11-year-old and 12-year-old boys down to the pool deck. The younger Maryland swimmers stayed in the bleachers. He started to lead a cheer. “Give me an E-X-L-A-X. What’s that spell? Go, go, go!” It took me several days of thinking to finally realize what that cheer meant. Eating has always been one of my favorite past times, and I rarely had stomachaches. Although I didn’t immediately get it, I admired Michael’s attempts to galvanize the group, to keep us pumped up and excited to swim.

We swam on the 200 meter freestyle relay together. I remember him cheering for our teammate Danny, the anchor, quietly saying: “Come on Danny, get in.” We wanted him to get our team into third place so we all could get a medal. We ended up getting fourth. Michael and I gave a collective sigh. Maybe next time. Michael would rarely see a number four next to his name. (The only other time I can immediately remember is the 2012 Olympic 400 individual medley, when he was living through all the turmoil reported in Sports Illustrated and elsewhere.)

Twelve-year-old Michael did well at that 1997 meet — he saw the top of the podium several times. He didn’t blow away the competition in every event, but he was one of the most promising swimmers there.

The last day of the meet we swam the 200 medley relay. Michael was tasked with the backstroke and I with the butterfly. We waited on the same end of the pool; our two teammates stood at the other end. We weren’t seeded very well, certainly nowhere near the medals, but I was still hopeful that we’d get that third place that Michael so desperately wanted for us, in addition to his own cache of individual medals. At the very least we would be far ahead after the backstroke. Michael always seemed to get us a lead.

We did well in the relay, but we didn’t exceed our placement. Afterwards, Michael came up to me after our relay and asked if I saw what happened. I had no idea what he was talking about. “I slipped,” he said, referring to the wall swimmers push off to start the backstroke. But I didn’t mind. I was just happy to be there. I’d only started swimming two years earlier. To get to that meet was an achievement for me.

Whenever I see him on television or read about him in the paper, I can’t help but remember those times we swam together…when our personal records weren’t quite world records.

Swimming is one of the most isolating experiences one can have. Even if you have someone training with you, you can’t speak to them like you can while running. It is only you and the water. The more you swim, the more early mornings and late nights you spend in that solitary frame of mind, the more lonely you get. Imagine being the best swimmer in the world and having that hype surrounding you every time you jump in the water for practice, or every time you compete. It must not have been easy.

I remember being at a summer meet in 2002 hosted by the North Baltimore Aquatic Club, Michael’s longtime team. Somehow, through the wonders of seeding and the unpopularity of the 200 butterfly, he and I were placed in adjacent lanes for the race. By that point we hadn’t spoken in many years. He was already the wunderkind Olympian, world champion and world record holder. I knew he didn’t remember me. But I thought back to our time as 12-year-olds and I relished the opportunity to compete against him one last time. I’d be going off to college that fall and he’d be training, training, training.

We stepped onto the blocks. I saw him in my peripheral vision slapping his arms against his body as has become his trademark. We dove. I saw him for the first few strokes. Then I didn’t see him anymore. I focused on my own race, curious how far ahead of me he’d be at the end (it wound up being something like 20 seconds). 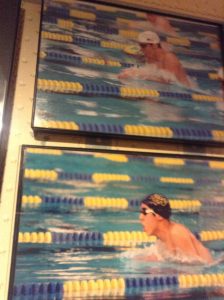 One of the author’s father’s attempts to put him and Phelps swimming side-by-side. Photo courtesy Jason Villemez

Years later, I joked with my father, who took pictures at that meet as he always did: “If I’d just gone all-out for the first few strokes,” I said, “you could have gotten a good picture of the two of us swimming side by side.” I was kidding. Immediately after the start, Michael had gotten a body-length ahead of me.

Instead of us being in the same photo, my father took individual shots of us during that race, framed them, and placed them side by side on our living room wall, so that it looks like we’re racing, if not for that infinite gutter between the photographs that separates the greatest swimmer ever from myself. Over the years, the distance between our lives grew and grew; by the time I turned 20, I’d stopped swimming altogether, and Michael had just qualified for his second Olympics.

But whenever I see him on television or read about him in the paper, I can’t help but remember those times we swam together and lunched together; the times as 12-year-olds when we shattered our best times by tens of seconds and not tenths of seconds, when our personal records weren’t quite world records. I remember his kindness, his spirit, his successes and his failures. He wasn’t a phenomenon. He wasn’t an Olympic champion 23 times over. He was just Michael.

Jason Villemez swam for the Naval Academy Aquatic Club from 1995 to 2002.

Track the spread of novel coronavirus with this map

WATCH: Sen. Schumer says Tuesday was a ‘dark day’ for the Senate