An outside political group backing Judge Neil Gorsuch’s Supreme Court nomination is launching an ad campaign pressuring Senate Democrats to support him as the Senate prepares for a final fight over his confirmation next week.

The group’s latest push comes as Senate Democrats are trying to block Gorsuch’s nomination from reaching a final vote. Gorsuch needs the support of 60 members in a cloture vote that would advance his nomination to the floor for a final vote.

Some of the Judicial Crisis Network’s money will go toward cable ads airing nationwide, the group said. But it is also funding statewide ads in Colorado, Indiana, Missouri and Montana — states where Democrats will be defending Senate seats in 2018.

Three of the senators holding those seats — Michael Bennet of Colorado, Joe Donnelly of Indiana, and Jon Tester of Montana — have yet to publicly announce whether they will filibuster Gorsuch’s nomination or oppose his confirmation, even as many of their Democratic colleagues have committed to doing both. Sen. Claire McCaskill, who is also defending her seat in 2018, announced Friday that she would oppose Gorsuch.

In 2016, President Donald Trump won the home states of three of the four senators the Judicial Crisis Network is targeting in its latest ad buy. Hillary Clinton won Colorado by 5 points.

READ MORE: ‘Backward is not backwards’ and other takeaways from Neil Gorsuch’s Supreme Court confirmation hearing

The Senate Judiciary Committee is planning to hold its vote on Gorsuch on Monday, which will allow Senate GOP leaders to schedule the cloture vote.

Senate Majority Leader Mitch McConnell (R-Ky.) announced earlier this week that the Senate would hold the final vote on Gorsuch’s nomination on April 7, the last day before Congress takes a two-week recess.

Senate Minority Leader Chuck Schumer (D-NY) said last week that he would filibuster Gorsuch’s nomination and asked other Democrats to do the same. “After careful deliberation I have concluded that I cannot support Judge Neil Gorsuch’s nomination,” Schumer said in a speech on the Senate floor. 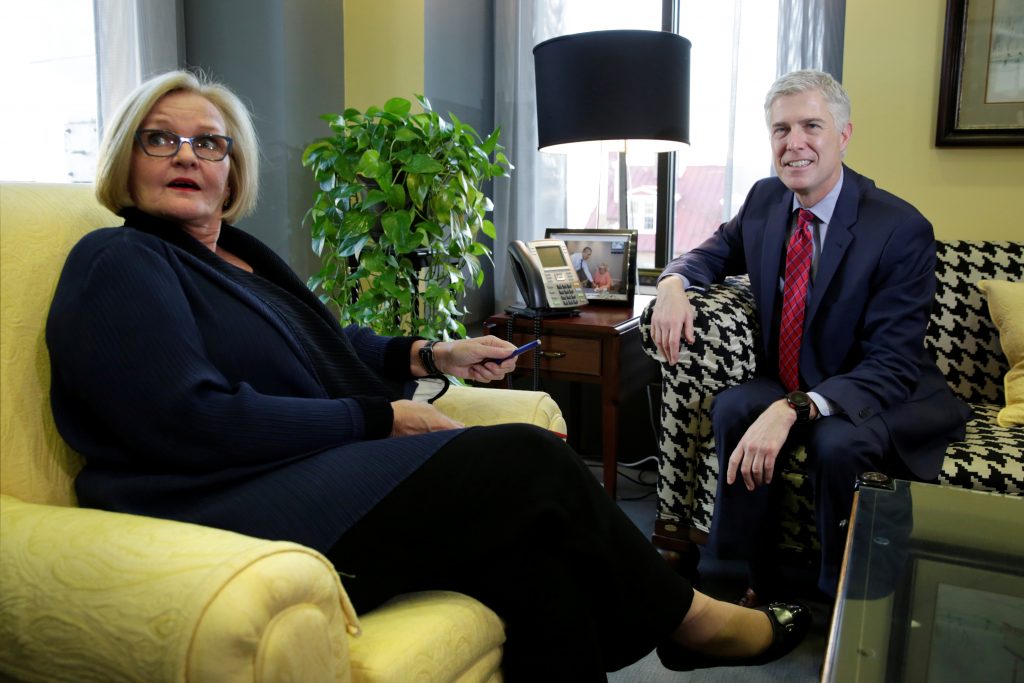 A Democratic filibuster would force Senate Republicans to eliminate the rule that requires Supreme Court nominees to receive 60 votes to advance to a final vote.

McConnell has said he wouldn’t rule out changing the rule, known as the “nuclear option,” to confirm Gorsuch. It’s unclear, though, if enough Republicans support the rule change to pass it without Democratic support.

Schumer argued against changing the rules in his floor speech. “If this nominee cannot earn 60 votes [then] the answer isn’t to change the rules, it’s to change the nominee,” he said.

Gorsuch received a boost Thursday when Sens. Heidi Heitkamp of North Dakota and Joe Manchin of West Virginia — two of the Democrats from red states facing tough reelection battles next year — announced their support for his confirmation.

MORE: Did senators get enough substance on Gorsuch’s views?

“I hold no illusions that I will agree with every decision Judge Gorsuch may issue in the future, but I have not found any reasons why this jurist should not be a Supreme Court Justice,” Manchin said in a statement.

“I was taught that two wrongs don’t make a right,” Heitkamp said in a statement. “There isn’t a perfect judge. Regardless of which party is in the White House, the U.S. Supreme Court should be above politics.”

In a statement, Severino said that the Democrats “did the right thing” by “resisting the partisan calls for gridlock” around Gorsuch’s nomination.