Could this be the world’s oldest wine cellar? 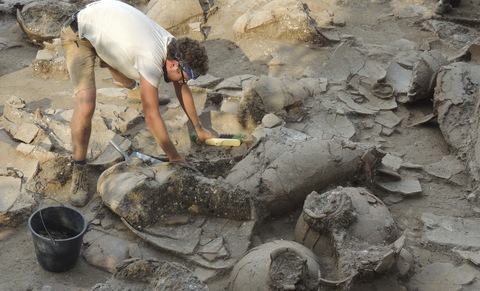 Researchers announced Friday that they have discovered what could be the world’s oldest and largest wine cellar. The cellar was unearthed in Israel and excavators say it could have held around 3,000 of today’s wine bottles.

“This is a hugely significant discovery — it’s a wine cellar that, to our knowledge, is unmatched in its age and size,” said Dr. Eric Cline of George Washington University who co-directed the excavation.

American and Israeli researchers discovered the cellar after finding 40 large jars that were each 3-feet long in a 15-by-25-foot storage room. They determined the jars did in fact hold wine by conducting an organic residue analysis on the jar fragments. Acids integral in winemaking were found in the jars along with other ingredients popular in ancient wines including honey, mint and cinnamon bark. Scientists are still analyzing the fragments and researchers say they are “possibly discovering enough information to recreate the flavor.”

A team of archaeologists discovered a room containing 3,700-year-old wine jars while excavating the site of Tel Kabri in northern Israel.

The ancient wine cellar was discovered at the Tel Kabri site in Israel among the ruins of a city that dates back to 1700 B.C. The excavation gives researchers a window into the lives of the city’s elites as they discovered the cellar was connected to a banquet hall. Dr. Assaf Yasur-Landau of the University of Haifa in Israel and co-director of the dig said the banquet hall was “a place where the Kabri elite and possibly foreign guests consumed goat meat and wine.”

Findings from the dig will be presented at the annual meeting of the American Schools of Oriental Research in Baltimore on Friday. However, there is still more to discover about life in the ancient city. At the end of the excavation the researchers found two doors exiting wine cellar, but they will have to wait until their research resumes 2015 to find out where those doors lead.