Charlottesville victim’s mother: ‘So much healing to do’

CHARLOTTESVILLE, Va. — The mother of a woman killed when a car plowed into a crowd of counterprotesters at a white nationalist rally last summer said Sunday there’s much healing to do a year after the violence in Charlottesville, Virginia.

Heather Heyer’s mother, Susan Bro, visited the site of the attack on Sunday afternoon. She laid flowers at a makeshift memorial and addressed a crowd that gathered around her in downtown Charlottesville, thanking them for coming to remember her daughter but also acknowledging the dozens of others injured and the two state troopers killed when a helicopter crashed that day.

“There’s so much healing to do,” Bro said. “We have a huge racial problem in our city and in our country. We have got to fix this or we’ll be right back here in no time.” 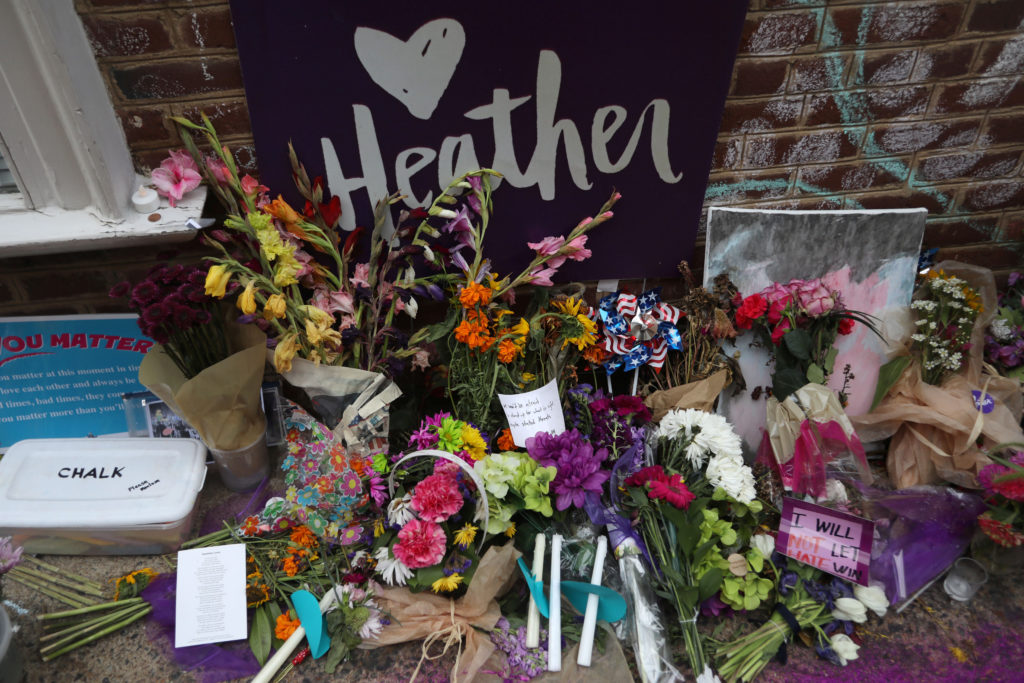 Flowers and messages are left at a memorial to Heather Heyer ahead of the one year anniversary of 2017 Charlottesville “Unite the Right” protests, in Charlottesville, Virginia, on August 11, 2018. Photo by Jim Urquhart/Reuters

The vigil was one in a series of largely peaceful community events held in Charlottesville over the weekend to mark the one-year anniversary of the rally, one of the largest gatherings of white nationalists and other far-right extremists in a decade.

On Sunday, some 115 miles away in Washington, Jason Kessler, the principal organizer of last year’s “Unite the Right” event, was scheduled to hold what he called white civil rights rally Sunday afternoon in Lafayette Square in front of the White House.

President Donald Trump won’t be at the White House — he was at his golf club in New Jersey.

READ NEXT: How Trump talks about race

Kessler said in his permit application that he expects 100 to 400 people to participate in his event, though the number could be lower. Some leading figures in the U.S. white nationalist movement have said they won’t attend or have encouraged supporters to stay away.

Counterprotesters assembled in Washington ahead of the rally’s scheduled start and were expected to far outnumber Kessler’s crowd. By mid-afternoon, more than 1,000 people had gathered in Freedom Plaza, also near the White House, to oppose Kessler’s demonstration. The counterprotesters planned to march to Lafayette Square just before the arrival of the white nationalists. 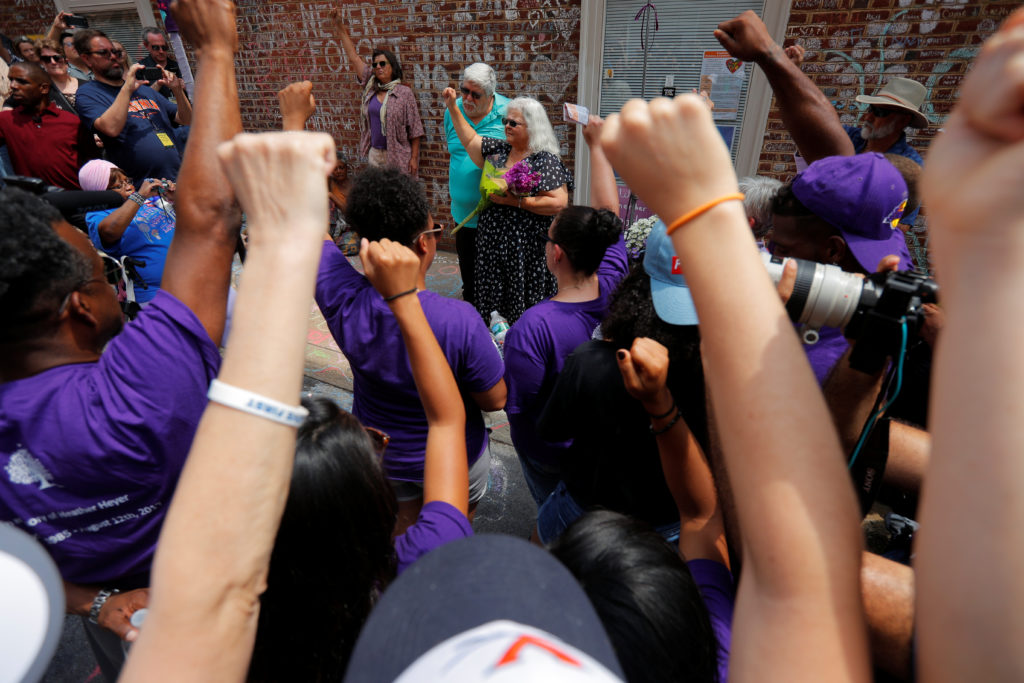 Susan Bro gestures at the site where her daughter Heather Heyer was killed, on the one year anniversary of 2017 Charlottesville “Unite the Right” protests, in Charlottesville, Virginia, on August 12, 2018. Photo by Brian Snyder/Reuters

Earlier this month, Facebook stunned and angered counterprotest organizers when it disabled their Washington event’s page, saying it and others had been created by “bad actors” misusing the social media platform. The company said at the time that the page may be linked to an account created by Russia’s Internet Research Agency — a so-called troll farm that has sown discord in the U.S. — but counterprotesters said it was an authentic event they worked hard to organize.

Government and police officials in Washington have expressed confidence the city can manage the events without violence; the mayor and police chief have promised a massive security mobilization to keep protesters and counter-protesters apart.

Earlier in the day in Charlottesville, a crowd of more than 200 people gathered in a park to protest racism and mark the anniversary. The group sang songs, and speakers addressed the crowd. Among them was Courtney Commander, a friend of Heather Heyer, the 32-year-old who was killed when a car plowed into a crowd of people protesting the white nationalists.

Commander, who was with the 32-year-old Heyer when she was killed, said, “She is with me today too.”

Last year on Aug. 12, hundreds of white nationalists — including neo-Nazis, skinheads and Ku Klux Klan members — descended on Charlottesville in part to protest the city’s decision decided to remove a monument to Confederate Gen. Robert E. Lee from a park.

Law enforcement officials faced blistering criticism in the aftermath of last year’s rally for what was perceived as a passive response to the violence that unfolded. A review by a former U.S. attorney found a lack of coordination between state and city police and an operational plan that elevated officer safety over public safety.

The anniversary weekend was marked by a much heavier police presence, which also drew criticism from some activists.

At one point Sunday, demonstrators marched through Charlottesville, chanting, “Cops and Klan go hand in hand,” and “Will you protect us?”

Left: Susan Bro is embraced at the site where her daughter Heather Heyer was killed, on the one year anniversary of 2017 Charlottesville "Unite the Right" protests, in Charlottesville, Virginia, U.S., August 12, 2018. REUTERS/Brian Snyder - RC152C915600