SAN DIEGO — Rallies for and against Donald Trump’s “big beautiful border wall” with Mexico are expected to mark his first visit to California as president amid growing tensions between his administration and the state over immigration enforcement.

Trump will visit eight towering prototypes for the wall on Tuesday before addressing Marines in San Diego and attending a fundraiser in Los Angeles. He’ll be staying there overnight.

Trump’s visit comes as his administration has been engaged in a war of words and legal briefs over California’s refusal to cooperate with federal immigration authorities.

The Justice Department last week sued to block a trio of California laws designed to protect people living in the U.S. illegally. Attorney General Jeff Sessions followed up with a speech in Sacramento that was immediately denounced by the state’s Gov. Jerry Brown, who said the Trump administration was “full of liars” and the lawsuit akin to an “an act of war.”

A top federal immigration official lashed out at some of the state’s elected leaders ahead of the visit. Thomas Homan, U.S. Immigration and Customs Enforcement’s acting director, singled out Brown, Sen. Dianne Feinstein and House Minority Leader Nancy Pelosi on Monday for their recent criticism of a spate of immigration arrests in the state and a federal lawsuit challenging state laws that limit cooperation on immigration.

Homan said Pelosi’s comments about federal agents terrorizing immigrant communities were “beyond the pale” and challenged Feinstein to change laws if she disagreed with how they are enforced.

President Donald Trump signed an executive order last year calling for the construction of a new border wall spanning the length of the U.S.-Mexico border. While prototypes have been built in California, there is still no funding from Congress to build a permanent structure. Special correspondent Jean Guerrero from KPBS reports from San Diego on the stakes for different people on the border.

Protests are also being planned across the border in Tijuana, Mexico, when Trump will examine the 30-foot-tall prototypes built along the international border to fulfill his signature campaign promise. Trump has insisted Mexico pay for the wall. Mexico has adamantly refused to consider the idea.

Organizers on both sides were urging people to remain peaceful after recent scuffles at rallies in Southern California, including brawls at a Dec. 9 rally near where the prototypes stand.

San Diego is the largest city on the U.S.-Mexico border to formally oppose his plans, passing a resolution in 2017.

Immigrant activists, church leaders and elected officials held a news conference at the city’s historic Chicano Park to call for demonstrations to show border communities do not support a wall. Standing in front of murals of Mexican revolutionaries and other Latin American icons, they chanted “We reject your hate! We don’t need your racist wall!”

“It’s really important that as a region, as a city that has firsthand understanding of what the border wall means for our communities that we stand against (this) and we send a strong message to DC to say this is something that we don’t welcome,” City Councilwoman Georgette Gomez said on Monday.

Gomez sponsored the resolution opposing the wall, calling it detrimental to the city’s environment and tourism. It also expressed the city’s intent to divest from the companies involved in the construction, financing and design of the wall. 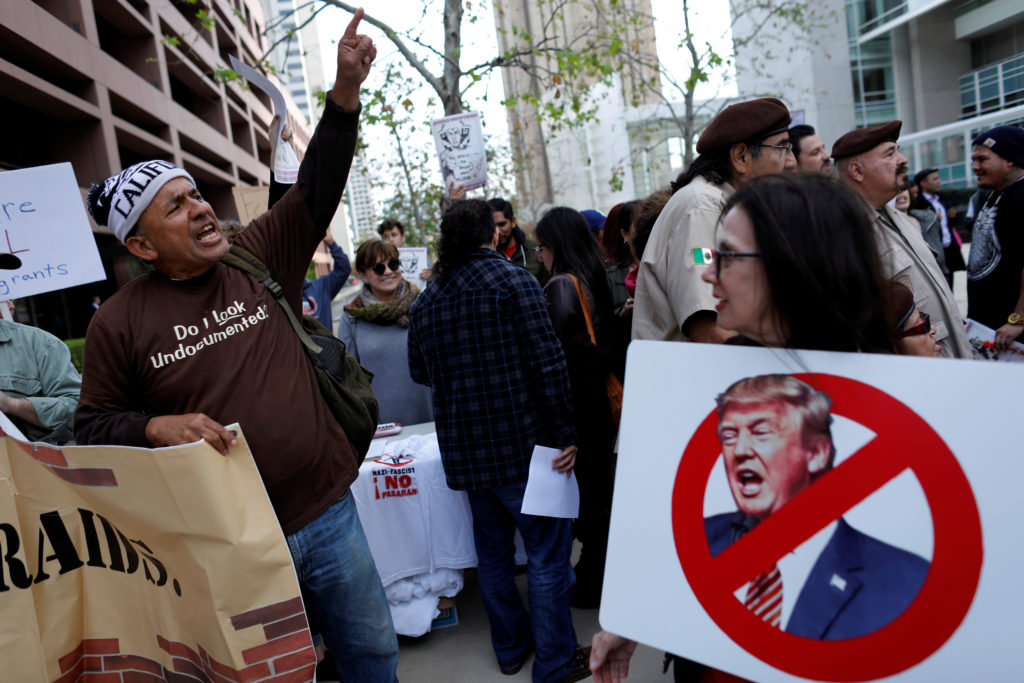 Activists and community groups hold a rally to condemn the visit of President Donald Trump to California ahead of his visit to view border wall prototypes in San Diego, California. Photo by Mike Blake/Reuters 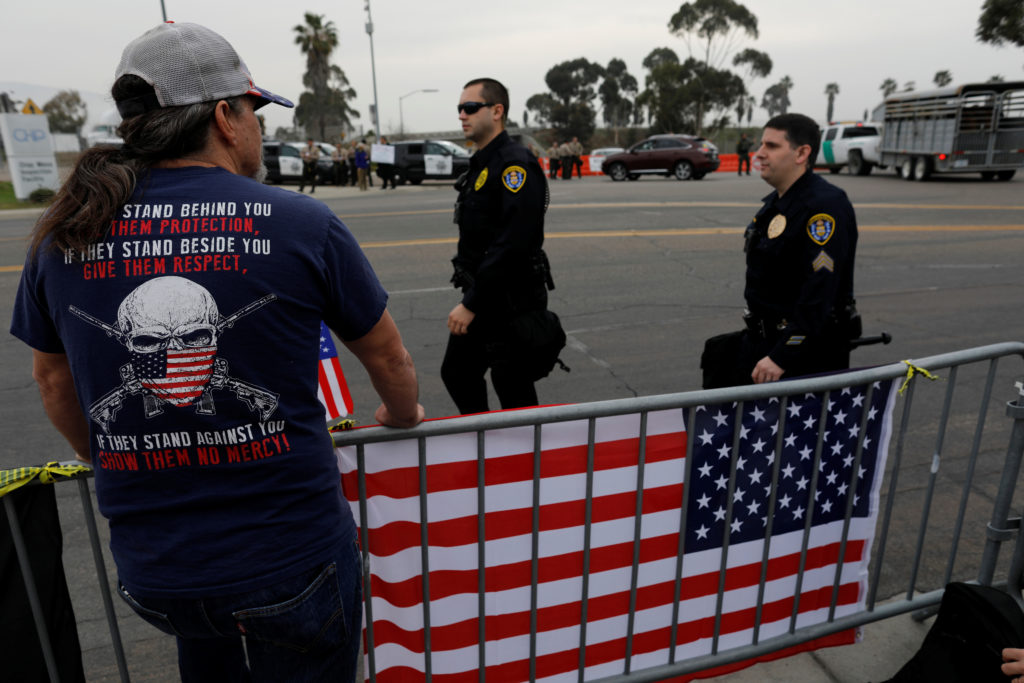 A pro-Trump supporter looks out behind a fence as a large police presence has closed off access near the border for the visit of President Donald to view border wall prototypes in San Diego, California. Photo by Mike Blake/Reuters

The visit isn’t Trump’s first to the border. Weeks after declaring his candidacy in June 2015, Trump traveled to Laredo, Texas, accompanied by a presidential-sized motorcade that included two coach buses packed with reporters.

Trump told reporters after landing that he was putting himself “in great danger” by coming to the border. But, he said, “I have to do it. I love this country.” Laredo is one of Texas’s safest cities.

San Diego Mayor Kevin Faulconer — who is not expected to meet with Trump during his visit — did not support the resolution but also did not veto it. The mayor’s office said Faulconer, a Republican, has been clear in his opposition to walls along the border, but he did not want to blacklist companies involved in the construction of the prototypes.

“When some people look at the U.S.-Mexico border, they see division,” Faulconer said in his state of the city address in 2017. “But here in San Diego we view it much differently. Rather than allowing the border to divide us, we’re building bridges that connect us.”

Jeff Schwilk, founder of San Diegans for Secure Borders, whose group participated in the December rally near the prototypes that ended in clashes with counterprotesters, said the city council’s resolution does not reflect the views of many residents, who feel the border is not secure. He said his organization respects free speech and hopes Tuesday’s rally will be safe for participants.

“We absolutely want President Trump to feel welcome and to come inspect the prototypes so we can get the wall built,” he said.

Trump is expected Tuesday to be briefed on lessons learned from the construction of the prototypes built in San Diego last fall. He also will meet with border agents and officers to ask what they need, Homeland Security spokesman Jonathan Hoffman said.

The president will not be swayed by California Republican lawmakers concerned the wall is a waste of money, White House spokeswoman Sarah Huckabee Sanders told reporters Monday.

“You see, in California we are focusing on bridges, not walls,” Brown, a Democrat, said in a letter sent to Trump.

Left: A prototype for President Donald Trump's border wall with Mexico is seen behind the current border fence in this picture taken from the Mexican side of the border in Tijuana, Mexico. Photo by Jorge Duenes/Reuters

How smugglers stand to profit from Trump’s border wall