‘It makes me feel confident, it gives me my look’ — Festival celebrates natural hair

For many members of the natural hair community, this scene is dreamlike. While beauty standards have evolved throughout the years, black scholars and activists point out that pop culture has often depicted white people as setting the standard of beauty, leading some people of color to alter or conceal their features. Enter Curlfest, an annual celebration of multicultural beauty in Brooklyn, New York, which took place July 15.

“For decades and years we as people of color have … never felt or been made to feel that we are beautiful the way that we were. We are conditioned to want to have lighter skin or have straighter hair or have lighter eyes,” said Charisse Higgins, director of public relations for the Curly Girl Collective, which organized the event. “I think now we’re just at a place where we’re like, ‘You know what? The kinkier my hair is, the more interesting and beautiful that it is.’”

The Curly Girl Collective formed after a friend of the collective’s five directors did “the big chop,” a ritual of cutting one’s chemically treated or damaged hair and beginning to grow hair naturally. She was looking for advice on styling her natural hair texture with its shorter length, so she created an online group dedicated to the discussion of hair that grew to nearly 100 members.

One of the members, Tracey Coleman, who would later become the collective’s director of events, hosted some of the group members at her home, where they swapped their favorite hair products, watched a demonstration by a professional hairstylist and styled one another’s hair.

In 2014, they hosted the first annual Curlfest, which became the collective’s signature event.

This year’s festival, which organizers said was the largest ever, drew thousands of people from around the world who bought hair products, exchanged beauty advice and above all, served looks.

PBS NewsHour Weekend spoke with festival attendees to find out why they celebrated their hair at Curlfest. 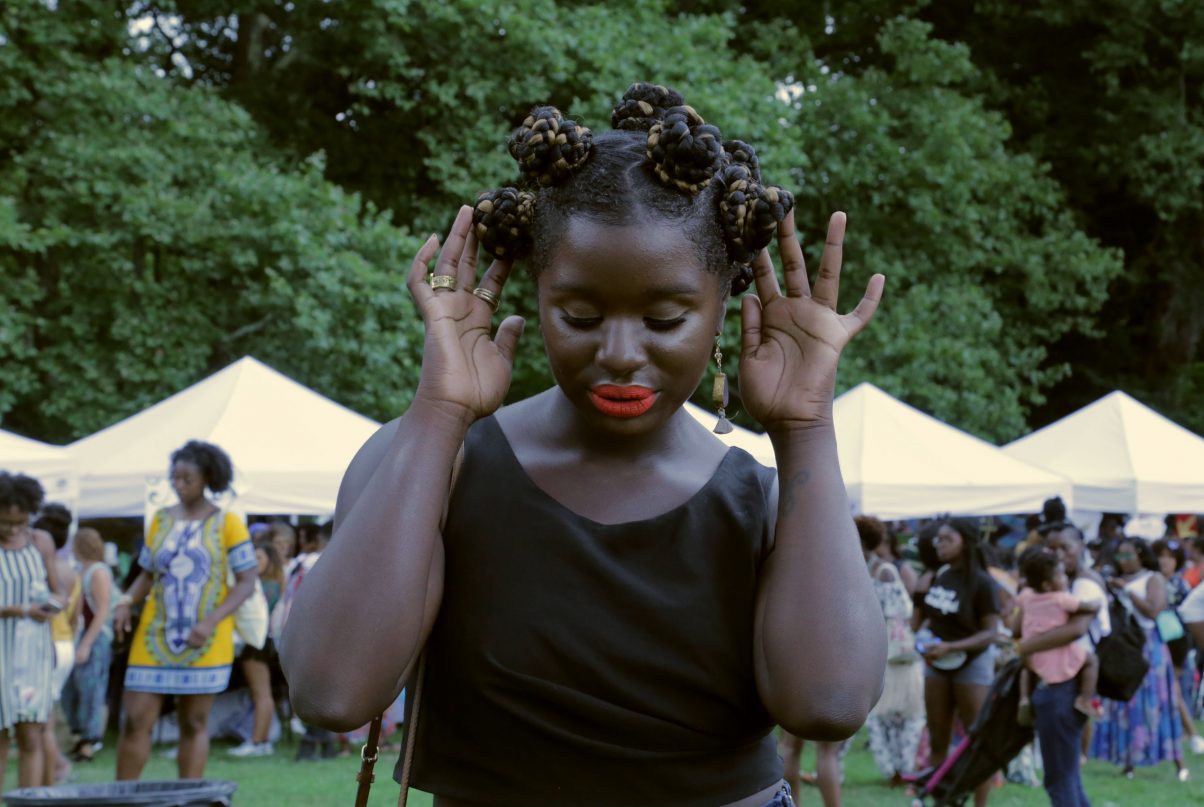 My hair means everything to me. I love it. I like to play around with different styles. I wear it natural. It makes me feel confident, it gives me my look. It’s almost like I don’t want to have my identity in my hair, but it makes me feel like a bad b*tch. I love my natural hair.

I think [this festival is] important because it allows other women to embrace their hair. And when you have that platform in the media for something that’s so huge as Curlfest, like rock your natural hair, it gives the women who may feel like “Oh, my hair isn’t pretty, my hair isn’t good” the confidence to walk outside and be like “You know what? My sh*t is cute.” 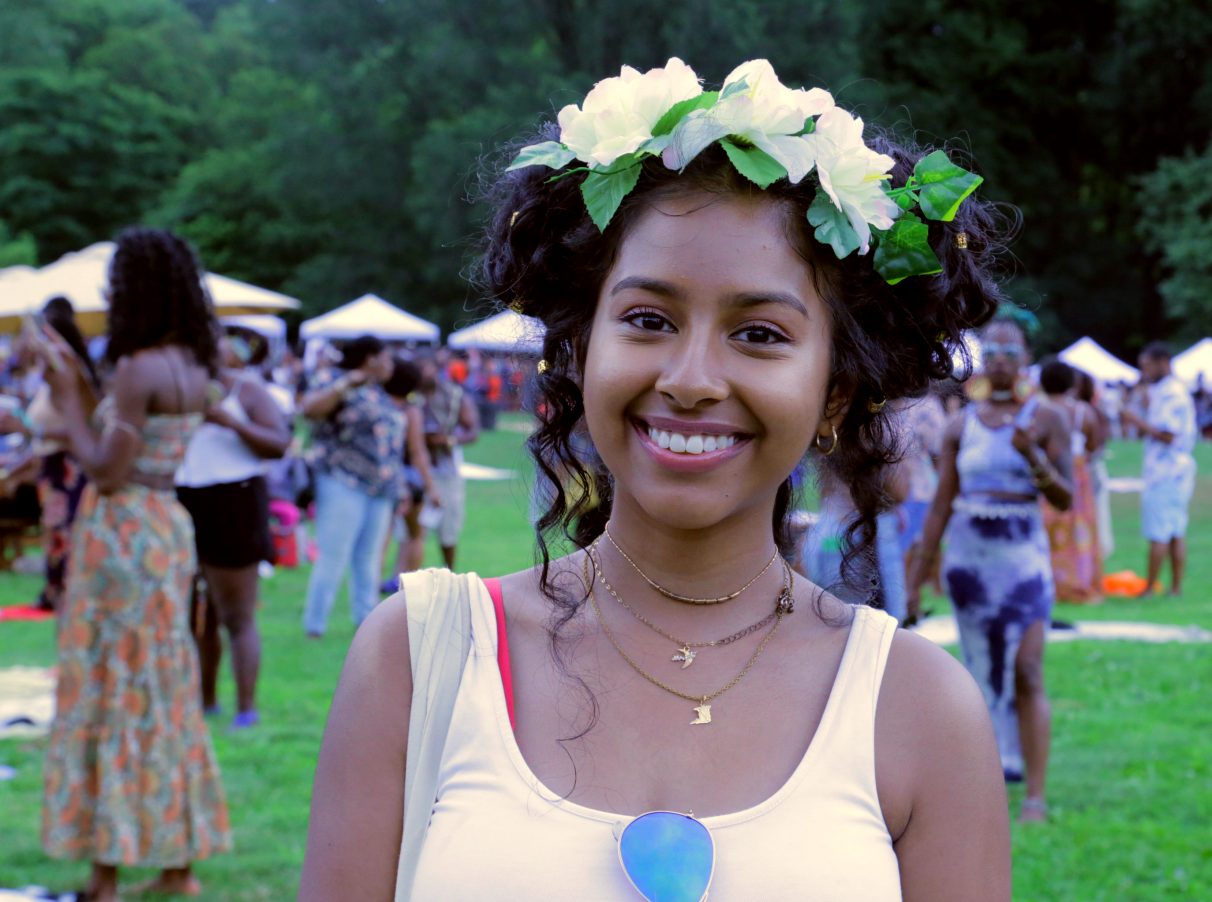 It’s like a community here. Everybody is coming here with the same mindset: to enjoy themselves because everyone has natural hair. It’s something they’ve been taught to suppress because of certain white standards. Now everybody’s just loving themselves and I love it. I love the energy and the vibes and free stuff too.

People, especially a lot of young ones, need to understand to love themselves because they’re taught to suppress these things. Growing up in a world like this, you need to love what you have growing out of your hair. It’s a hard world out there for people of color so they need to learn to love themselves. 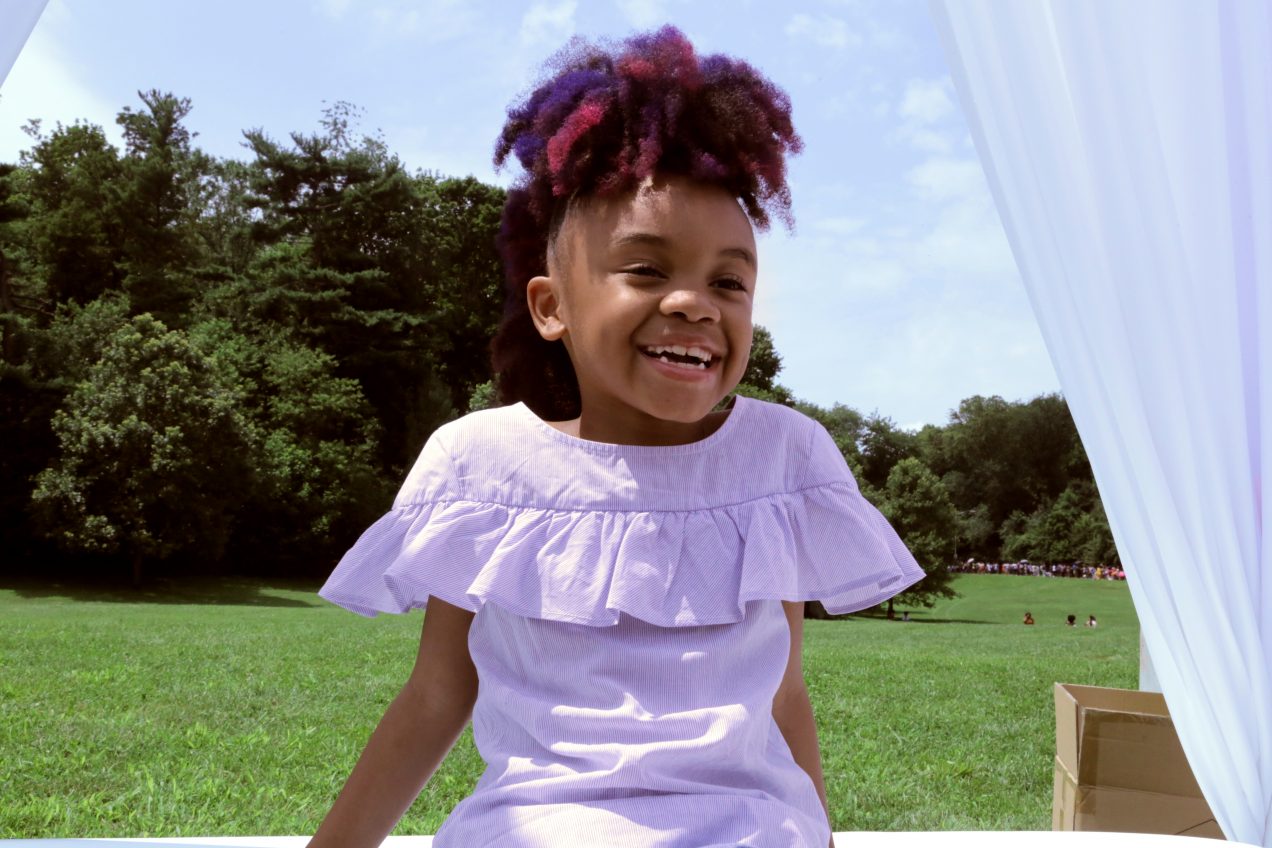 Candice: This is our second year coming, my first year bringing my daughter Kennedy, because last year when I came everybody asked about her so I thought might as well as bring her. I just love the festival, the black girl magic, it just feels it’s like a feeling you can’t really put into words.

Kennedy: I feel good about [my hair]. It’s my style … I like the colors because it goes with Curlfest. I’m excited to meet all the bloggers. 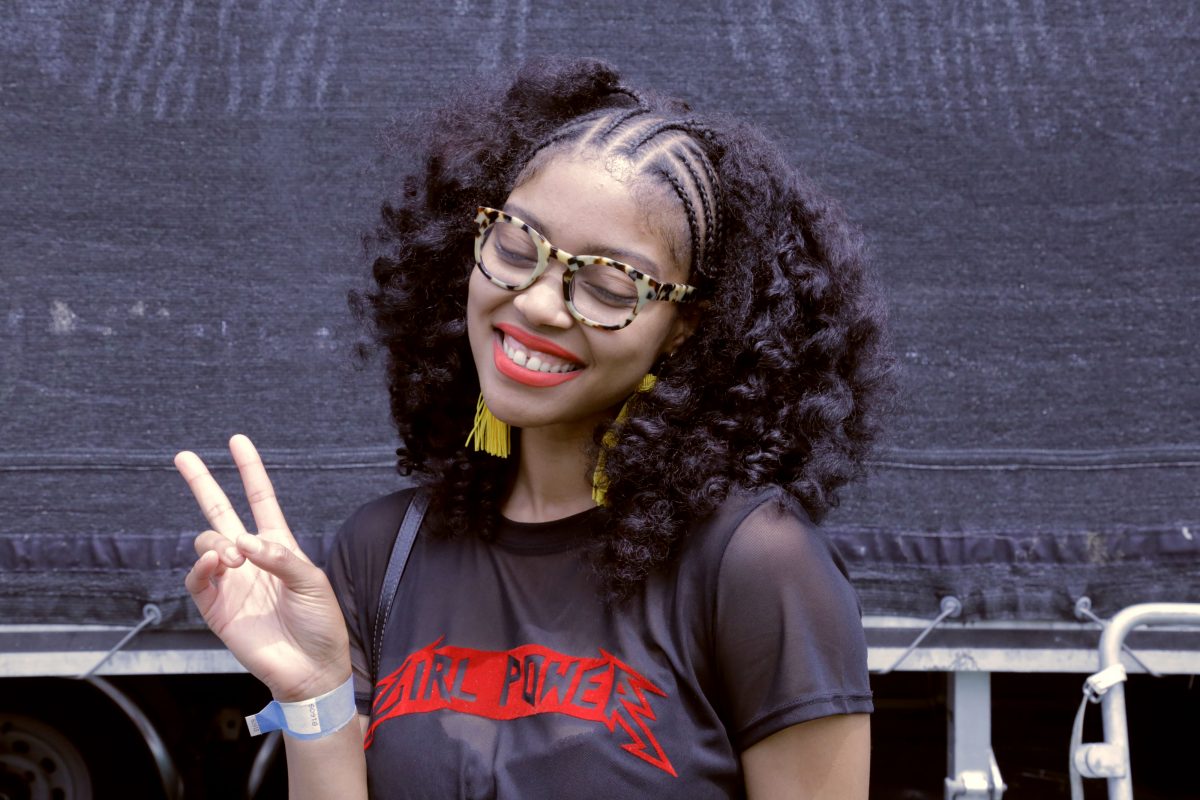 My hair is my crown. It’s pretty much the first thing that you see. My hair exudes so much energy. I love my hair. It’s definitely part of who I am as a person. … I like to show that you can do versatility with our hair. The amazing thing about our texture is that it can be straight, it can be curly, it has superpowers, it literally can do whatever. It can defy gravity. 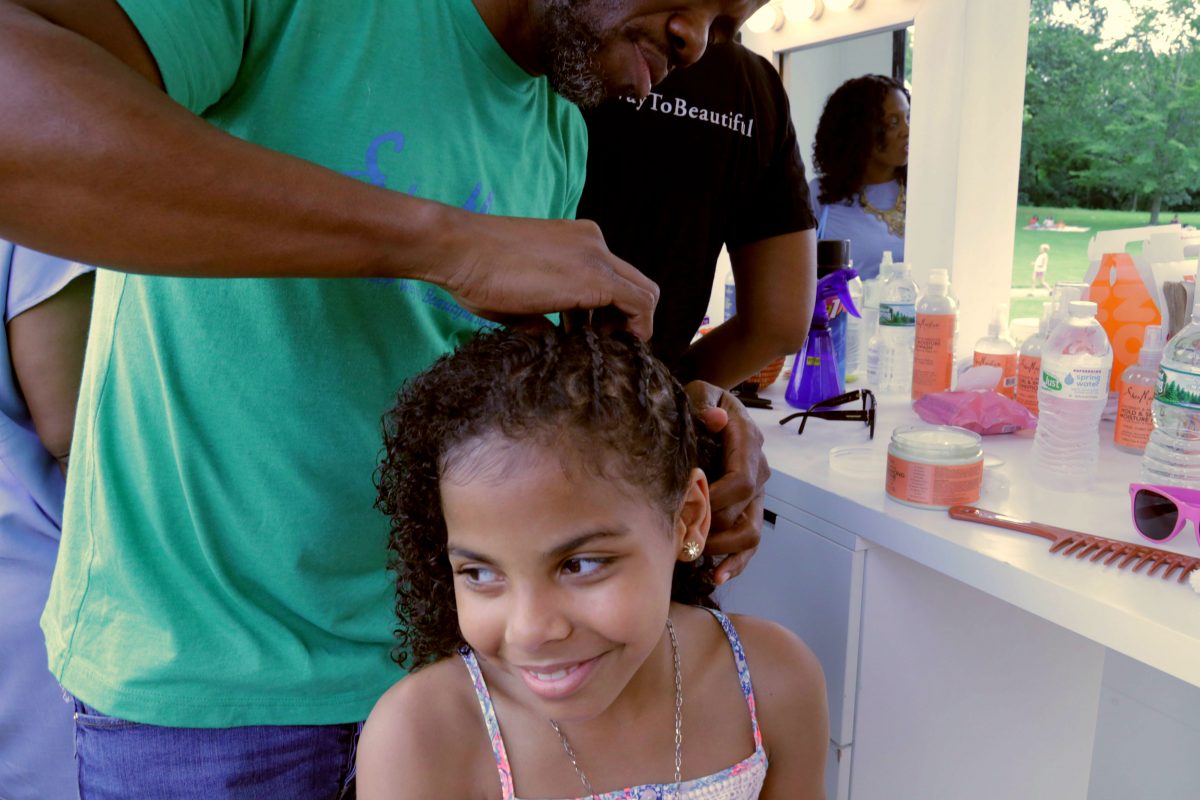 Jadira: A lot of girls, in my culture — I’m from the Dominican Republic — we tend to perm our hair. When we’re pregnant, the first thing they say to us is “Oh, I hope she doesn’t come out with bad hair.” Like curly hair is a bad thing. She came out with extremely curly hair and they were like, “Oh, well, you can blow dry it.” I’m like, “Leave my daughter with her hair like that!” 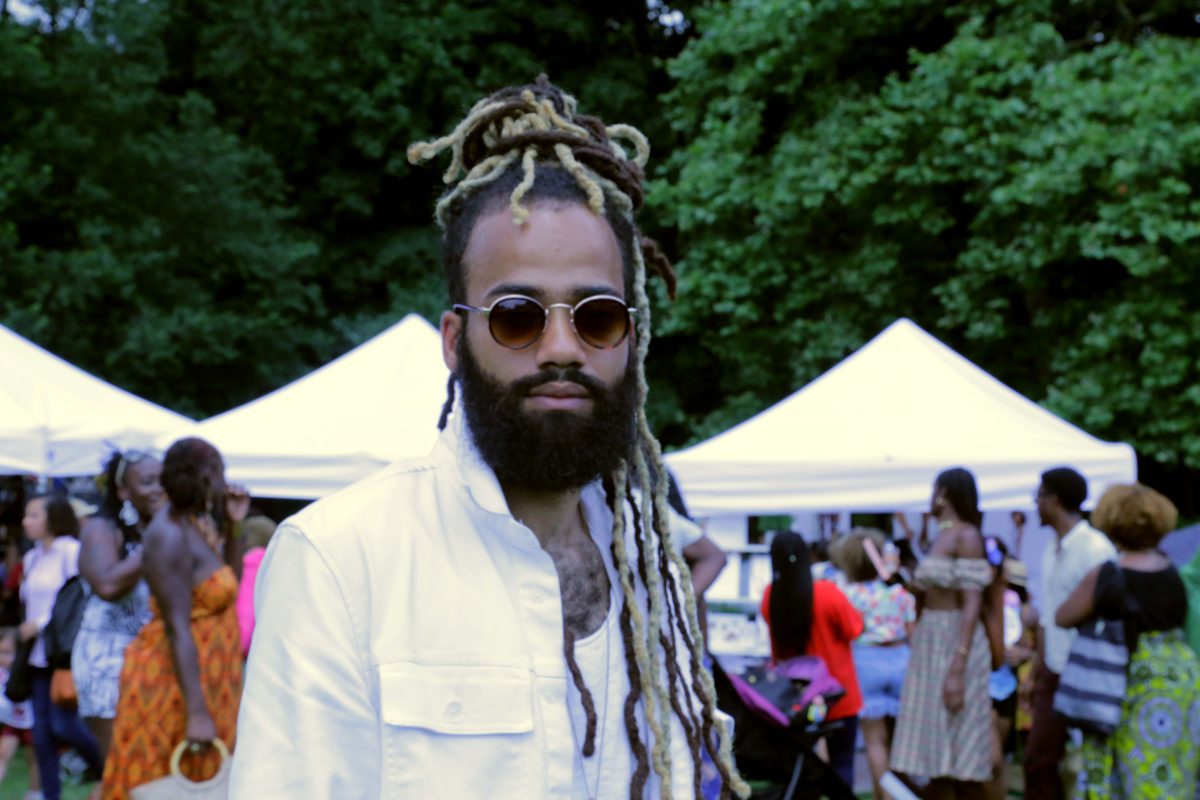 I’ve had my locs for a decade this year. It was something I knew I always wanted and grew into my own. I love locs because they’re very personal, no two sets are alike. It’s really an extension of you, your energy, your vibe. I love them. They’re a huge part of who I am and have been for the last decade. 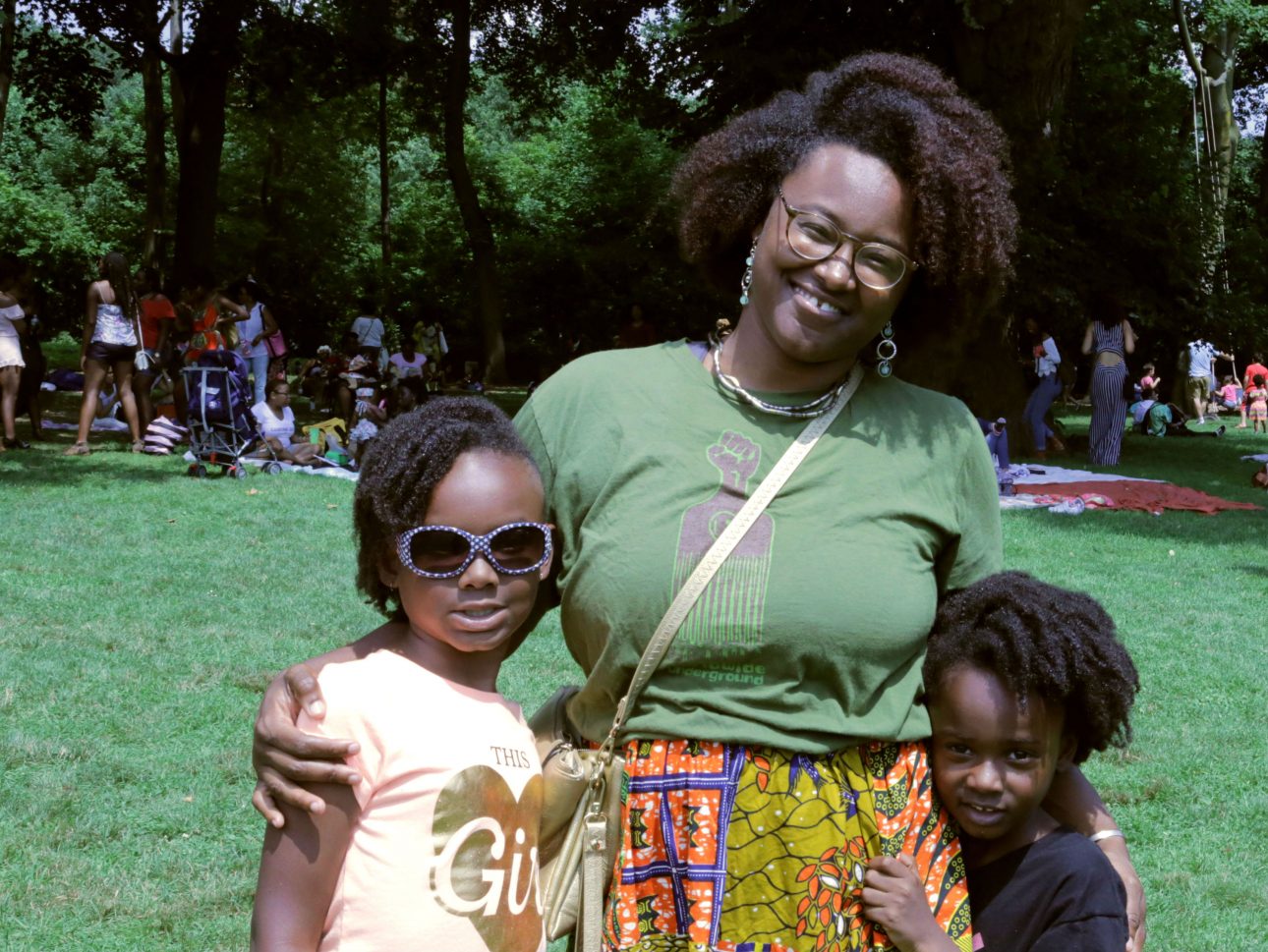 [I’m here] to check things out and for my little ones see the large gathering of black women, particularly so they can identify with their hair and give them some encouragement.

It’s a simple identification. Obviously my skin is dark but my hair is also who I am. It’s an appendage of its own. 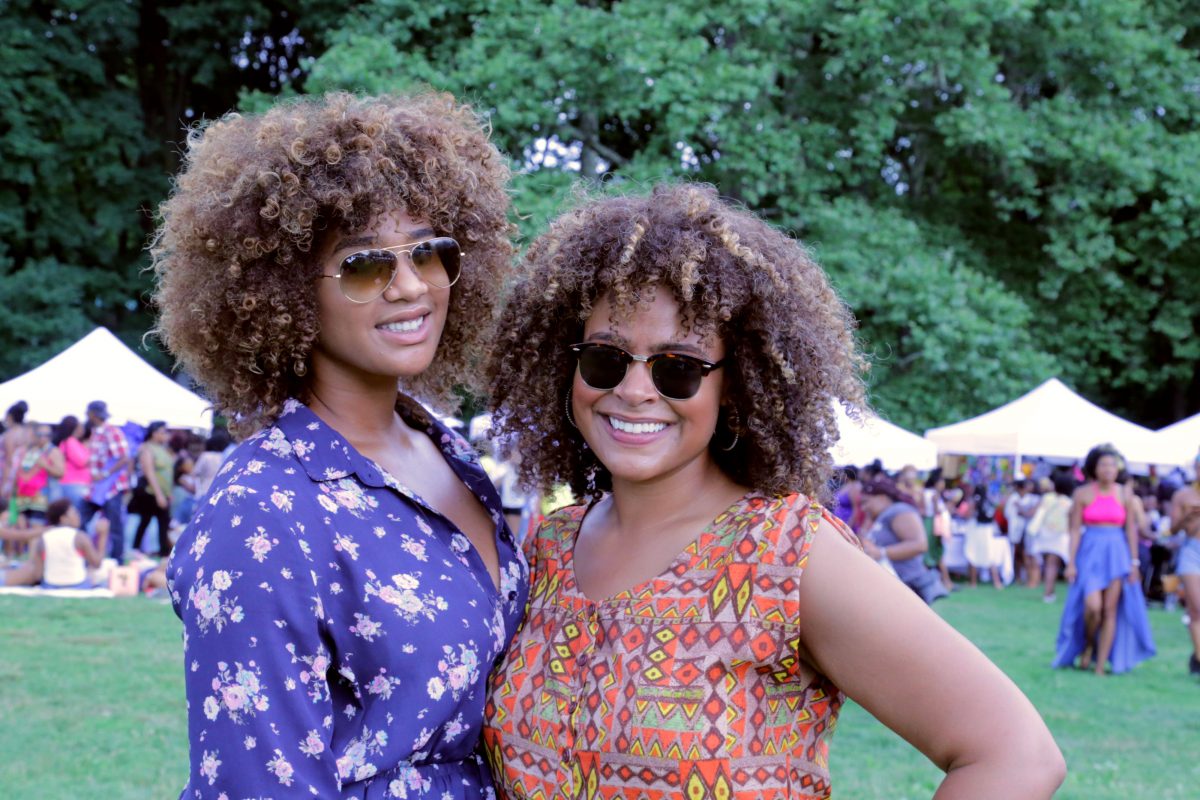 Vasquez: Especially I think nowadays and in our communities where natural hair is still in some parts not so much as taboo but still coming into acceptance, I think it’s important to have a space where you can not have that judgement or that concern and really just the appreciation of natural hair no matter what culture you are. 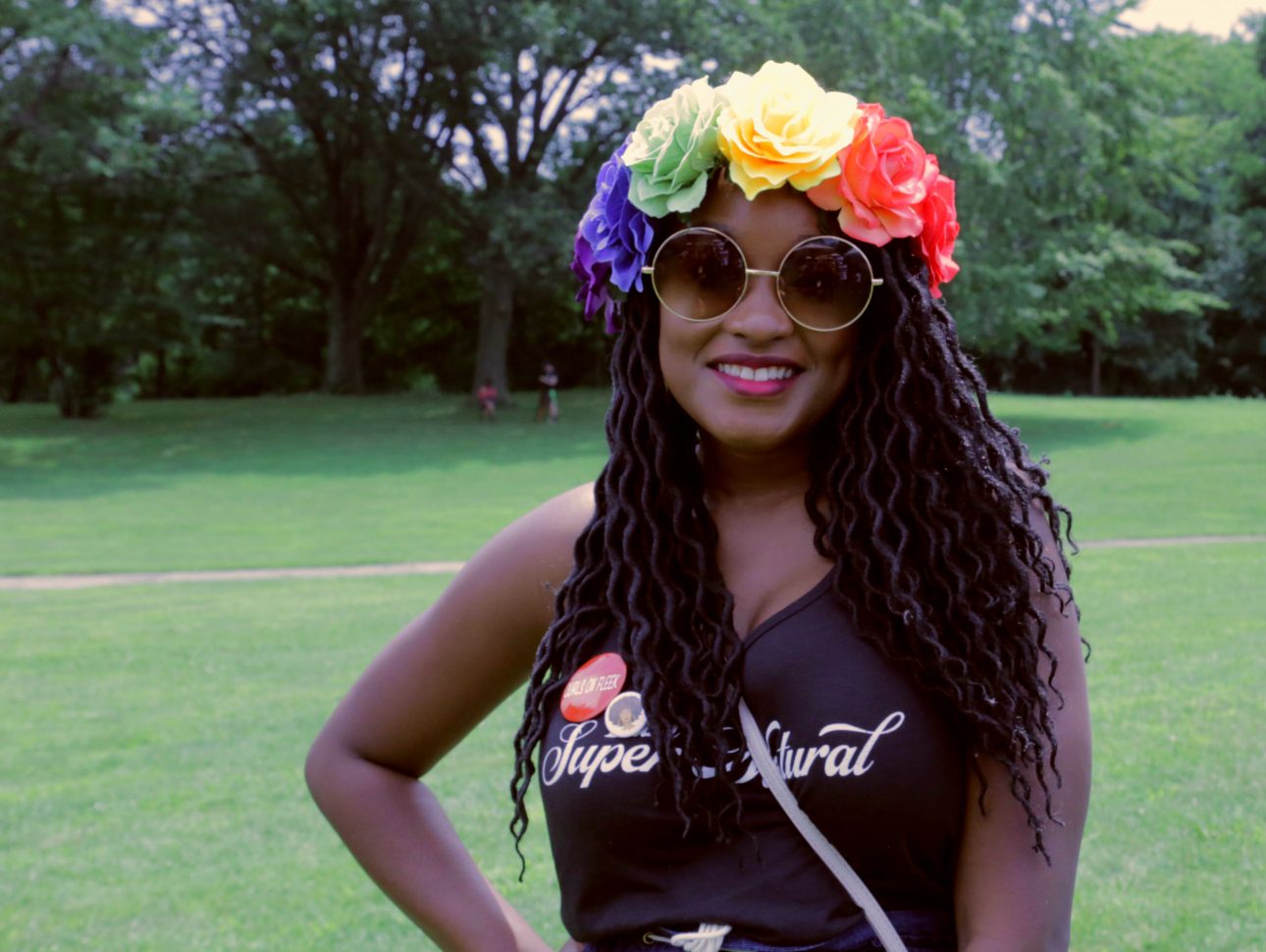 I have a love-hate relationship with my hair. I have very thick hair and I love that my hair is very thick and healthy. I have a lot of freedom to do a range of styles. I have a hate relationship because it’s so thick. Because it’s so thick and it’s so hard to manage I often use protective styles. So now is why I have the faux locs in, to protect it and give me a break from doing my hair all the time.

Left: Belania Daley, 26, came to Curlfest in Brooklyn, New York, on July 15, 2017. "I never knew what my texture was until I started growing locs and I absolutely love it," she said. "I wouldn’t change it for the world. I’m learning about all these different hair brands that are specifically black-owned and I’m shocked. I didn’t know that there were this many." Photo by Jenna Gray