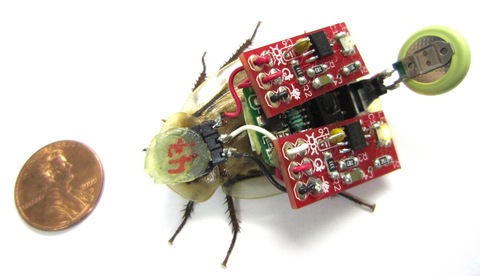 Have you ever wanted to control a cockroach with a smartphone? Well Dr. Frankenstein, fret not, because in a month, your really specific and kind of creepy wish could be granted. A company called Backyard Brains is releasing the first commercially available cockroach cyborg in the form of some microelectronics that the user would attach to the back of a cockroach.

The whole thing costs about 99 dollars, and comes with the electronics, a cockroach and surgical equipment to fuse the two together. Although the Roboroach sounds like it should be destroying a major metropolis in a B-movie, the creators hope to make it a teaching tool, planning for children as young as 10 to use it. According to Science Magazine, the process of converting cockroach to machine-cockroach is involved.

“Students are instructed to douse the insect in ice water to “anesthetize” it, sand a patch of shell on its head so that the superglue and electrodes will stick, and then insert a groundwire into the insect’s thorax. Next, they must carefully trim the insect’s antennae, and insert silver electrodes into them. Ultimately, these wires receive electrical impulses from a circuit affixed to the insect’s back.”

Not surprisingly, this has ignited some controversy among bioethicists and animal rights activists. A PETA representative was incensed. “To be disrespectful of life forms because they are small and we do not fully understand them or appreciate their place in the larger scheme of things is wrong. It is retrogressive and morally dubious.”

Jonathan Balcombe of the Humane Society University in Washington, D.C., says even if the project is a teaching tool, it’s still disconcerting. “If it was discovered that a teacher was having students use magnifying glasses to burn ants and then look at their tissue, how would people react?”

But Greg Gage, the co-founder of Backyard Brains wants to inspire more kids to pursue neuroscience. Talking to Vice Magazine, Gage was hopeful. “Neurological diseases suck. Getting people excited about the brain is the idea [behind RoboRoach].”

Getting people excited about the brain isn’t the only possible use for cyborg cockroaches. Dr. Alper Bozkurt of NC State University wants to use these machine insects to help rescue earthquake survivors. He proposes that the cockroaches could be controlled by a rescue worker while the cockroaches carry a locator beacon, tiny microphone, or camera.

And the cyborg cockroaches reveal a larger issue of the bioethics of animal and cyborgs. In an interview with the NewsHour, Emily Anthes, the author of “Frankenstein’s Cat,” saw developments like the cyborg cockroach as inevitable. “I think this meshing of the biotic and the abiotic of living and machine is really the future of biotechnology. And we’re going to see a lot more animals and, frankly, humans that have electronic components integrated with their bodies.”

However they present themselves, cyborgs aren’t going away.