State funding for higher education isn’t what it used to be. The fact that most public colleges and universities took a significant hit when state revenues fell during the recession is well documented.

Five years into the economic recovery, 31 states have yet to return to funding higher education at the same levels they did in 2007. Even in many states where funding has bounced back, increasing enrollment has kept per-student spending from rising.

A new report from the liberal-leaning Center for American Progress shows that states’ portion of public higher education funding declined from 29.1 percent in 2008 to 22.3 percent in 2012. To make up for that the portion of higher education revenue coming from tuition rose in 47 states through the same period. This trend, too, has been covered extensively. 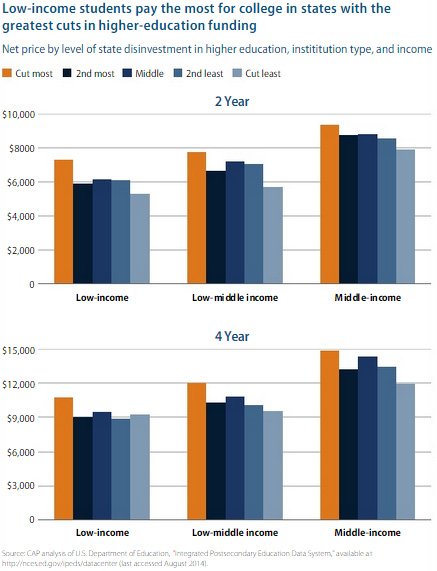 The report outlines a plan for the federal government to create incentives to draw states into devoting more money to higher education, especially in the form of tuition support for lower-income students. The more conservative thinkers at the American Enterprise Institute have argued that a return to greater state funding won’t solve higher education’s cost problems. Instead they say public colleges and universities should focus on taking greater advantage of technological and other innovation that can bring costs down.

Left: California has increased certain sales taxes to invest in state schools like the University of California - Berkeley. Photo by Charlie Nguyen.