Digging out: East coasters start to recover from record-setting storm

Millions of residents on Sunday began digging out a day after a deadly winter storm descended on the east coast, shutting down non-emergency travel in several major cities, trapping hundreds on interstates and setting records along the way with snow accumulations topping three feet in some areas.

The death toll from the storm also had risen to at least 25 on Sunday, even as the weather front causing widespread white-outs and gale-force winds across the region had moved out to sea.

Travel bans in the New York, Maryland and Washington, D.C. were lifted and bus and some subway services resumed as crews cleared roads packed with snow and ice.

The storm set new records at six locations in three states, according to the Weather Channel, with West Virginia’s 42 inches of snow accumulations leading all totals. 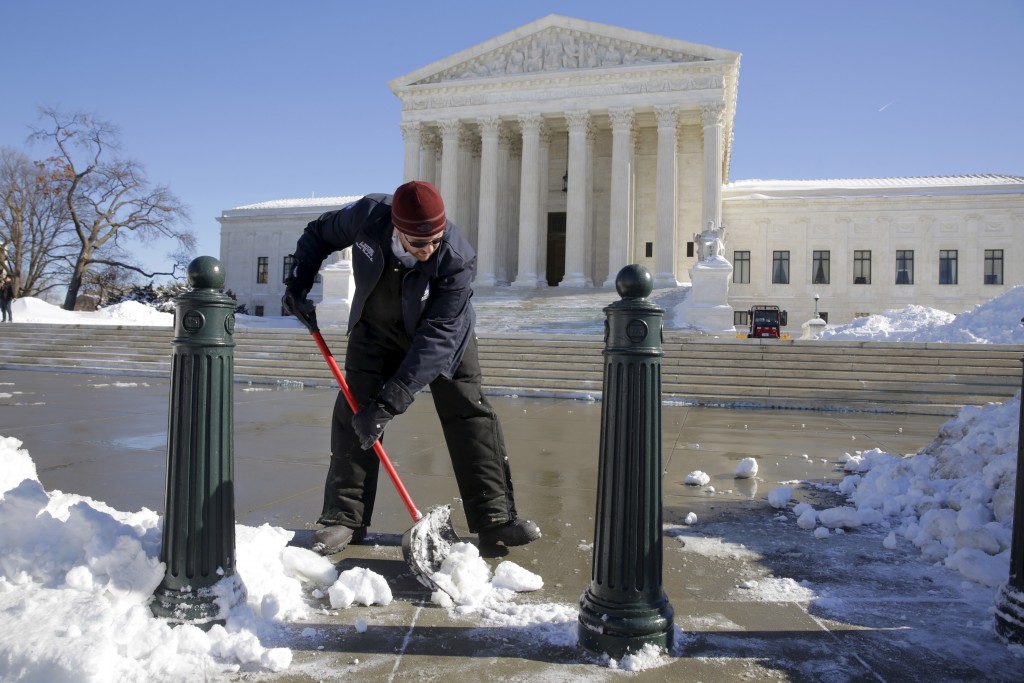 Josh Butcher clears snow from in front of the U.S. Supreme Court after a major winter storm swept over Washington Jan. 24, 2016. The National Weather Service said 17.8 inches fell in Washington, tying as the fourth-largest snowfall in the city’s history. Photos By Joshua Roberts/Reuters

“The travel ban has been lifted, but New Yorkers should still avoid unnecessary travel,” he noted on a Twitter post.

But as New Yorkers moved back toward a semblance of wintertime normalcy, thousands of others, mainly in the Carolinas, remained without power.

Officials were also working to reopen the Pennsylvania Turnpike after hundreds of driver became trapped on the roadway for hours during the storm.

Left: Residents clear their street of snow in Union City, New Jersey, across the Hudson River from Midtown Manhattan, after the second-biggest winter storm in New York history, Jan. 24, 2016. Photo By Rickey Rogers/Reuters