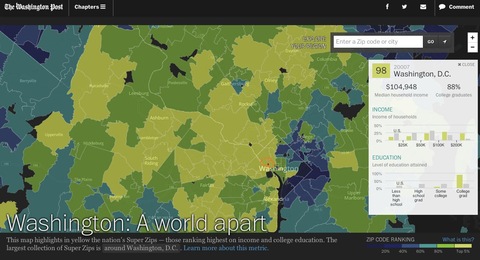 The Washington Post has created an interactive map that breaks down the so-called “Super Zips” — the zip codes in the U.S. with the highest per capita income and college graduation rates.

The term “Super Zip” was originally coined by Charles Murray of the American Enterprise Institute.

According to the Post’s analysis, there are 650 of these “Super Zips,” where a typical household earns over $120,000 a year, and 68 percent of the adults graduated from college.

Click on their map to see where your zip code ranks.